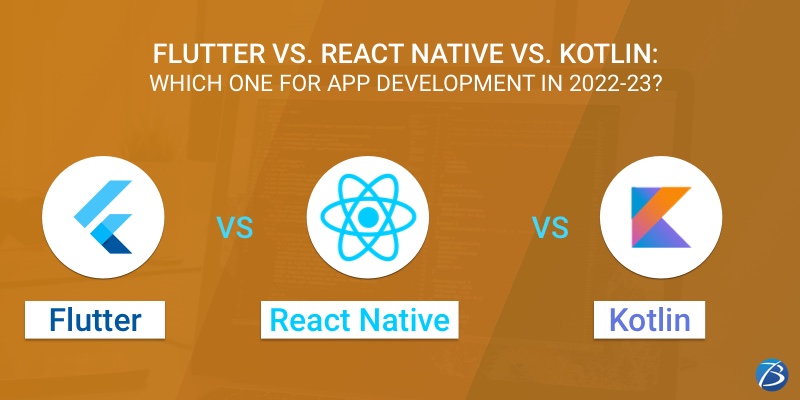 Language
Flutter uses Dart which is a client-optimized language that aims for faster application development. Development in React Native involves React JS, JavaScript, C, C++, and Python. The integration of multiple programming and development languages increases its likelihood of selection as an application development platform. Kotlin is compatible with Java Framework. It is called a better version of Java as it offers excellent features over Java.
Ease of Use
Flutter uses Dart which is easy to learn and use. Any developer with prior experience in React Native and Java can develop a complete application in less time with Flutter. The installation is easy and the application is open-source, both of which contribute to ease of use.
React native app developers prefer the language for its code reuse feature. It uses React JS, JavaScript, and C-related language which are popular amongst most software developers. Anything involving them mostly will not require time investment in learning the language.
Kotlin can be easily used by Android developers. It is gaining popularity over Java with Java-compatible tools and frameworks. The number of lines in coding can be significantly lesser than in Java.
Features
Every language comes with its own set of features. Flutter comes with automated developer and testing tools that can make the development very fast. This ensures real-time error checks and fast deployment.
React Native helps the react native developers to build Native-like applications. A single codebase can be used to develop platform-specific versions of components. The fast refresh feature immediately reflects the changes made in the code. The developments and improvements can be really fast.
Kotlin allows the application logic to be reused between the web, desktop, and mobile platforms saving a lot of time. It is popularly known as multiplatform programming language. The syntax used in the coding is very compact and clear which again saves time and fastens the development process.

The basics of all three languages are different. The ultimate differentiation comes with the overall impact created with the performance and development.
Flutter
Dart being easy to learn and use can be used by any developer to develop the application at a fast pace. Quick and simple installation is also very motivating for the new users. The user-friendly free documentation makes the development journey easier. The large community of developers keeps making improvements in the code to ensure a bug-free flutter app.
Real-time code changes and corrections is a real advantage. A significant time is saved in activities such as development and compilation.
It facilitates communication with the native modules which makes features such as scrolling very seamless on every platform. Flutter is gaining popularity day by day.
React Native
React Native app development allows the developer’s changes to immediately reflect on the application, allowing the developer to make faster changes.
Higher flexibility in using the third-party plug-ins is also making it developer’s favorite.
Reusing the code reduces the go-to-market time, making it a great development language for today
Kotlin
The code is clear and concise. It is gaining popularity over Java, and Java developers would prefer it anytime for application development. The lines of codes are less which implies lesser development time.
Shorter codebase leads to a shorter debugging time. With many of the Java language issues fixed in Kotlin, it is considered to be highly safe for application development.

Which One is Making the Way Towards 2022

React Native is expected to be accepted by the majority for its multi-language support. Its fast refresh feature and seamless integration with the third-party plug-in is something that every developer is looking for. It is definitely futuristic with faster development cycles and deliveries. Flutter and Kotlin, both are going to get their fair market share. The Java developers may opt for Kotlin and Google will definitely append its offering with Flutter to capture the maximum market.