Learn about the necessary features to include and the approximate cost of developing an app like Signal. 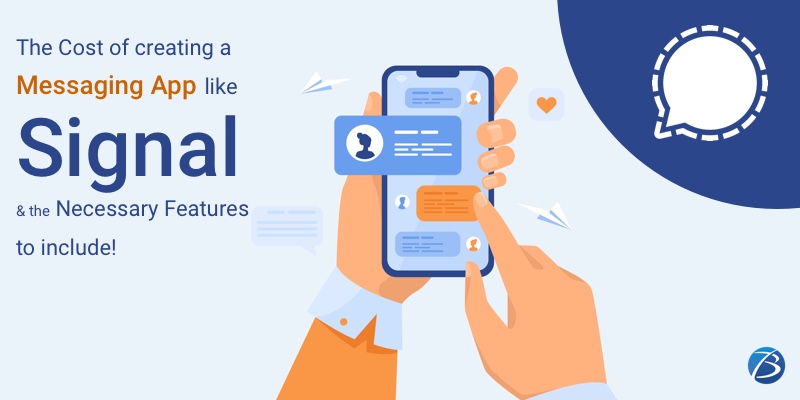 WhatsApp used to be the most popular messaging app, but not anymore, ever since its revised privacy policy was declared in January 2021. This policy asked users to share their personal information to Facebook. Needless to say, this declaration has adversely affected WhatsApp’s sky-high popularity as one of the most secure and encrypted messaging options. And, the Signal messaging app, which was earlier unnoticed by messaging app users, started to be adopted as the ideal replacement for safe messaging.
Signal has gained an undisputed reputation of keeping users’ chats and calls truly encrypted and private. Even high-profile users like Elon Musk, Brian Action, and Edward Snowden have endorsed Signal’s uncontested privacy quotient, because of the level of secrecy and security it offers.
Investing in a messaging app like Signal is a brilliant idea and many of you must have already started the app ideation process as well! So, this post explores the unique selling points of Signal, the necessary features to include while building a Signal-like app, and provides an approximate idea on signal app development cost.

Signal is a cross-platform messaging application that follows the approach of app models like Red Phone and Text Secure. It has bagged the reputation of being the most encrypted and secure application available in the market. Signal, being open-sourced; its source code is available on GitHub and can be accessed easily.
Using Signal chat, users can avail of one-to-one messaging as well as group chatting in the most secure manner possible. Users can share images, voice notes, files, and videos and make video/audio calls without having to worry about the risks of account hacks or data breaches. The reason is that Signal adheres to highly encrypted messaging protocols like Double Ratchet Algorithm, Extended Triple Diffie-Hellman, HMAC-SHA256, Curve25519, and AES-256, to rule out any chances of MITM (man-in-the-middle) hacking attempts. Moreover, all calls and messages that take place over the app are end-to-end encrypted, such that even Signal cannot access users’ data. Furthermore, the app doesn’t allow users to take a screenshot.
This revolutionary app has been created by the Signal Technology Foundation and the Signal messenger LLC.

Here’s how an encrypted messaging application works!
When the app is installed on a smartphone, a permanent key pair gets created. This key pair consists of a “public” and a “private” key that are meant to encrypt and decrypt messages. The process of encrypting and decrypting works like this – the “public” key is sent to the messaging server for identifying users and the private key stays within the users’ smartphones. And, if this private key is compromised, the users’ messages become vulnerable to security threats like decryption and misuse.
The Signal messenger uses a more secured protocol. It generates several temporary key pairs besides their permanent keys. This function empowers the app to change the key after each message. When a user sends a message to another user via Signal, it integrates the temporary and permanent pairs of public as well as private keys for both the users to create a shared secret key. This secret key encrypts and decrypts the message. And, as the private keys of users must be accessed for generating the secret key, the secret key stays only on the devices of the users involved in the messaging act.
Moreover, Signal adheres to the protocol of continuously replenishing keys for each user, and this function allows the app to acquire new shared keys after each message. Also, features like disappearing messages, turning off the lock screen notification option, blurred photos, and encrypted calls; tighten the app’s security further.

Essential Features to include in your Signal-like Chat/Messaging App 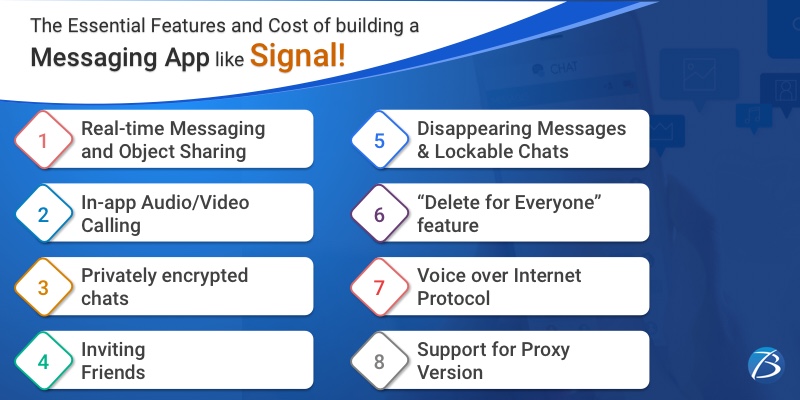 Real-time Messaging and Object Sharing
Real-time messaging is a core prerequisite; using this feature users enjoy real-time interaction from any part of the globe. The multiple object-sharing features enable users to share media, documents, contacts, and even their present location with other users either privately or via group messaging.
In-app Audio/Video Calling
The in-app audio/video calling feature is a must-have in messaging apps as it allows individuals across the globe to connect with each other from one single platform.
Privately encrypted chats
This functionality needs to be integrated into your messaging application as it restricts server access to metadata including chats, icons, titles, and membership icons.
Inviting Friends
Users should be able to invite their friends/acquaintances. So, your app should integrate “invite friends” feature that will request users to provide access to their contact details for inviting friends or acquaintances. This way, the users will be able to send the invitation link directly to the individuals they wish to add.
Disappearing Messages & Lockable Chats
The disappearing messages and lockable chat features provide users the flexibility to maintain the privacy of their personal life. Users can set a timer of their choice – 5 seconds, or even one week. After the end of the timeline chosen by the user, the messages will disappear automatically, without being stored in any cloud server.
“Delete for Everyone” feature
Signal allows one to delete messages (for everyone) unlike WhatsApp. Hence, users have the option to delete messages sent by mistake or simply if they wish to do so. So, integrating such a feature will attract users.
Voice over Internet Protocol
VoIP or the Voice over Internet Protocol feature is crucial as it offers a stable internet connection for ensuring an enriching communication experience, even during times of slower internet connectivity.
Support for Proxy Version
The proxy feature enables users to use the app seamlessly regardless of their location, even on instances when the app is blocked in some country. But, how? In Signal messaging, the proxy settings allow the user to make the necessary modifications for accessing the app since the data traffic remains opaque to the person who’s operating the proxy feature.

This post must have provided you with the necessary guidance on the USPs of Signal, its distinct way of functioning, and an average cost estimate of building a Signal-like messaging app. The development cost may vary as per the level of customization and complexity involved.
For developing a best-selling messaging app, it’s advisable to hire the services of an experienced and proficient mobile app development company like Biz4Solutions. We have helped myriad clients across the globe to build outstanding and futuristic app solutions for the past 10+ years. 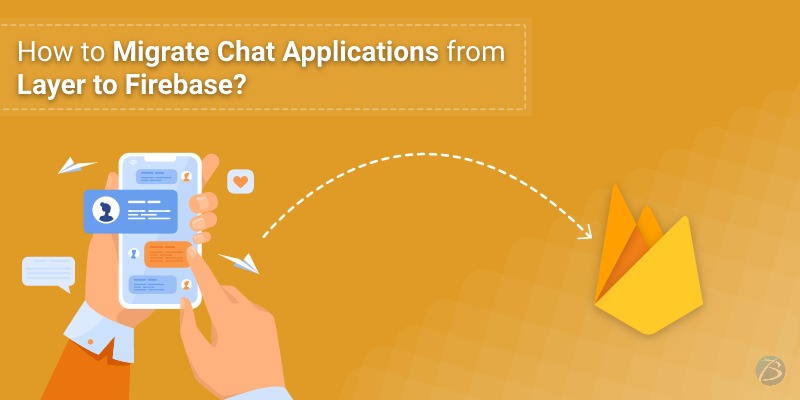 This blog post talks about how we migrated from Layer to Firebase in our existing chat application and what were the challenges we faced during this migration process. It will be quite helpful to mobile app developers while migrating the chat mobile apps or any existing apps with chat functionality. So, let’s look into the detailed process.
We had used Layer Android SDK for integrating chat functionality in one of our new-age messaging apps. This app has features like real-time 1 – 1 and group chatting, audio messages, recalling messages, Facebook messenger integration, payment gateway and military-grade security. The app is about 3-4 years old and is live on play store with a large number of paid users.
Layer provides SDK’s and API’s to implement real-time chat functionality in mobile applications. It helps to implement real-time 1 – 1 chat and group-chat functionalities. Since, Layer had shut down on October 30th, 2019, we had to migrate our chat functionality on this messaging app to Firebase platform by migrating all old users’ data from Layer to Firebase.

Why we Migrated to Firebase?

The major reason behind migrating from Layer to Firebase is the shutdown of Layer Platform. To keep all the mobile apps with chat feature and chat apps that we developed running properly without any hassle, it was essential to migrate from Layer to another platform. So we chose one of the best platforms- Firebase.
Firebase provides two cloud-based database solutions that are client-accessible and support data syncing in real-time:
Cloud Firestore provides better scalability, and performance for web, mobile, and server development from the Firebase framework. It is a cloud-hosted NoSQL database. It can be directly accessed via native SDKs for iOS, Android, and web apps. It is also available in native Node.js, Python, Java, and Go SDKs, along with RPC-based and REST-based APIs.
Cloud Firestore can keep all your data in sync for different client apps with the use of real-time listeners. It can provide offline support for web and mobile for developing responsive apps that can work efficiently despite issues like internet connectivity or network latency.

1) Design Firestore Structure Model:
Cloud Firestore is a NoSQL database and it is document-oriented where the data can be stored in documents that are organized into collections. Each document contains a set of key-value pairs. We designed the Firestore database structure as per our old data structure present on Layer.
2) Migrate Existing Data from Layer to Firebase:
To migrate chat data from Layer to Firebase, we created a script which helped to fetch data from Layer using Layer APIs and uploaded it to Firestore as per our data structure. Layer provided data in JSON format and we converted that JSON format data to Collection and Document format.
3) Firebase SDK Integration and Development:
We integrated the Firebase Android SDK to work with Firestore. Then we implemented chat functionality for existing users and for new users as well.

Challenges we Faced while Migrating from Layer to Firebase:

Due to Layer shutdown, many applications had faced issues with their chat functionality and hence it was necessary to migrate their implementation from Layer to any other platform. As a prominent mobile app development company, Biz4Solutions has good experience not only in chat application development, but also in migrating the chat functionality of existing apps from Layer to a robust platform like Firebase.
So, do you also want to migrate any of your applications from Layer to Firebase? Reach out to us today! We have a team of highly skilled mobile app developers and technical experts trained for solving various critical software solutions.
Page 1 of 212»