This post explores the Dot Net framework and provides detailed information about its offerings & benefits. 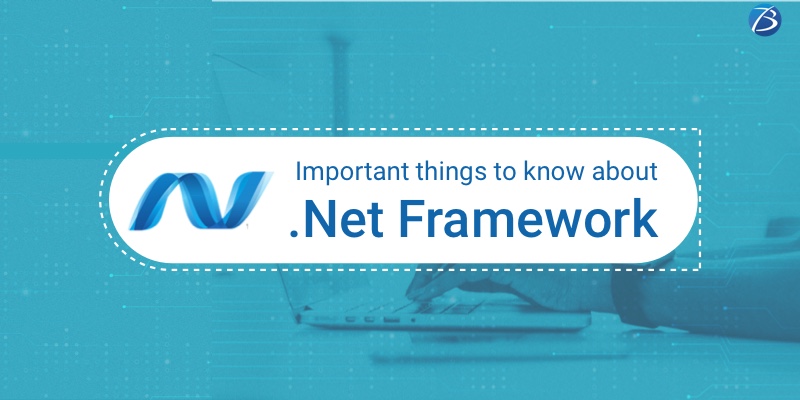 The Dot Net framework – leveraged for creating various kinds of enterprise applications and websites – has garnered a great deal of traction in recent times. The unique selling points of this framework are:
Dot net developers and dot net companies must be well versed with its key offerings, USPs, as well as crucial aspects of the framework and its functioning. This post provides you with all-inclusive information about the dot net development ecosystem. Here we commence!

Dot Net (.Net) is a free, open-source, cross-platform software development platform devised by Microsoft. It is used for architecting various kinds of apps for mobile, web, desktop, gaming, and IoT platforms. It is also used for building websites and web services. With the dot net framework, one can use various languages, libraries, and editors.
The first version – .Net framework 1.0 – was launched in 2002 and was meant to develop apps for the Windows platforms. Thereafter, Microsoft has rolled out several enhanced versions to keep this framework updated with changing market trends; the latest version being .Net framework 6.12.0.122.
Using dot net, you can build Web-based as well as Form-based Apps applications. This framework is known for supporting a wide range of programming languages including Visual Basic, C#, and F#; and this provides plenty of choice to the .Net app developers while crafting app solutions.

A Huge Collection of Comprehensive Libraries
The Dot Net eco-system offers a huge assemblage of pre-defined libraries offering simple/complex data structures. It is a systematic app development ecosystem that ensures quality and also enables reengineering and migration. Moreover, .Net extends its support to a plethora of languages, technologies, and software tools. Consequently, dot net developers enjoy the privilege of creating functionalities that are based on the needs and accordingly write the code. Furthermore, a dedicated library for functions like encryption, database access, security, etc. is also available.
ASP.NET: Back-end Development Tool
ASP.NET, a crucial and handy software tool, is an open-source web app creation platform for executing back-end functions. It is the key tool offered by the Dot Net eco-system for developing various dynamic web solutions like websites, web apps, web services, etc. with JavaScript, CSS, HTML, and server scripting. Any .Net language can be used for writing ASP.NET apps.
The presence of the ASP .NET MVC (Model-View-Controller) architecture is another USP of the dot net framework. On account of this development model, there’s better separation between the app’s code and the UI code and it becomes easier for software professionals to perform unit tests as well as to conduct Test-driven Development (TDD). This leads to better code management and guarantees code security. Owing to the MVC approach, .Net developers need not worry about ViewState and IsPostBack each time and hence can build apps as per their natural workflow, resulting in improved efficiency.
Moreover, ASP .Net WebHooks are used to connect Web APIs with SaaS services. It also allows using additional extensions that facilitate web development.
Visual Basic .Net and C#: Main Programming Languages
The Dot Net framework consists of as many as thirty-two programming languages including Visual Basic .Net, C#, F#, Boo, A Sharp, Cobra, Oxygene, IronPython, Fantom, etc. Out of these, Visual Basic .Net and C# are the most notable ones. Both of these languages are used for the front-end development of various kinds of apps starting from web solutions to desktop apps.
C# is an object-oriented language and is quite similar to Java and C++. It has been designed to meet the needs of the Dot Net platform and facilitates in crafting complex app solutions that are scalable and flexible as well.
Visual Basic .Net is also an object-oriented language meant for the .Net platform. It is employed for creating large-scale web apps, gaming apps, simple command-line tools, and graphical user interfaces.
Visual Studio
Visual Studio is a powerful IDE (Integrated Development Environment) used for writing the .Net and C# programs and is free to download. It supports an array of functions like interface designing, code editing, debugging, server management, analyzing performances, etc.
Ability to build Different Types of Applications
This programming framework comes with a plethora of features and guidelines; and is capable of developing apps/solutions for diverse platforms including mobile, web, and Windows.

Dot net: Crucial Aspects to watch out for 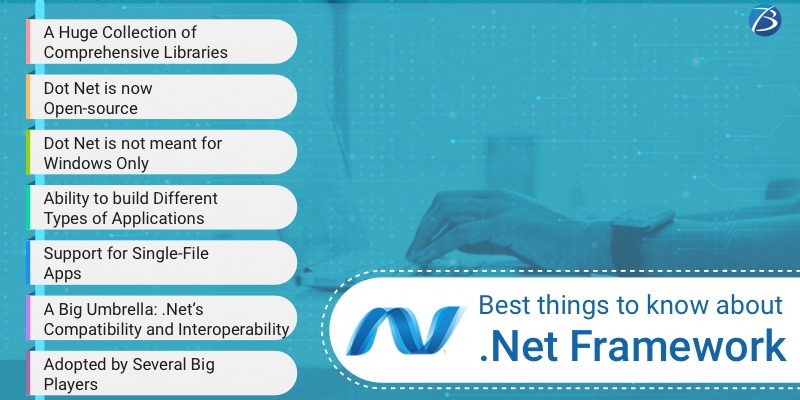 Dot Net is now Open-source
The .Net framework became open-source in 2014. To be precise, certain portions of the framework are available under the open-source license. C# Roslyn is an example of an open-source compiler created by Microsoft, under the Apache license; its source code can be downloaded from GitHub. Owing to its open-source nature, the .Net framework enjoys the following advantages:
Dot Net is not meant for Windows Only
Initially, .Net was meant for Windows only. But, after the NET Core update rolled out by Microsoft in 2016, Dot Net can now run on several platforms such as Mac OS X and Linux. On account of being an open-source as well as a cross-platform development technology, it enables developers to add new platforms to applications. It is also employed for building Cloud and IoT apps and offers several libraries, a compiler, and a core runtime.
Support for Single-File Apps
The updated version .NET 5 had added the support for single-file apps. This feature allows the .NET developers to publish/deploy apps and their dependencies as a single file; wherein the dependencies are bundled into one file. In earlier versions, single-file apps could support binaries only. But .NET 5 update provides a new internal structure that supports direct execution and at the same time, doesn’t affect performance.
A Unified System with CLR and FCL
The dot net framework consists of the CLR and FCL. The function of CLR or the Common Language Runtime is to manage the program execution written in various languages; while FCL or the Framework Class Library is a set of standardized types that helps in running .net apps. CLR and FCL together create an eco-system that enables different programming languages to interact natively, thereby representing a unified system.
A Big Umbrella: .Net’s Compatibility and Interoperability
Dot Net is considered to be a big umbrella as it is compatible with a plethora of tools, technologies as well as languages. It offers a systematic eco-system for software development that is not only a good choice for app building, app migration, and reengineering; but also comes with a promise of quality assurance.
Besides its support for a wide range of tools, skillsets, and languages; this framework offers interoperability as well. Interoperability refers to the capability of specific software or hardware to virtually work with various kinds of hardware/software, including the ones that have not yet been discovered. Dot Net is interoperable with most standard programming languages and operating eco-systems.
Its interoperability can be classified into three broad categories – COM interop (dot net with COM components); P/Invoke (dot net with Win32 DLLs); and .Net interop (COM components with dot net). COM refers to the Component Object Model that was introduced by Microsoft as the binary-interface standard in between 2 binary modules – a user-run program and a library. COM explains the standard through which these two binary modules unite as well as interact with each other. Accessing the .Net components from COM components using dot net runtime is referred to as forwarding compatibility, whereas, accessing the old code COM from dot net components is known as backward compatibility.
Adopted by Several Big Players
The Dot Net technology has been adopted by several top-layer global companies across diverse industrial domains. Some of them are Accenture, Dell, TCS, Epic Systems, Dell, Quicken Loans, and TitleSource. These big market players trust the .Net framework owing to its reliability, easy learning curve, and popularity amongst developers.

Thus, .Net is a standard software framework that programs and runs mobile as well as web apps seamlessly. Its integrated development environment ushers in myriad advantages for developing software solutions. And, the good news is that the .Net core framework awaits a brighter future ahead and is expected to grow exponentially in the years to come.
Biz4Solutions, a distinguished outsourcing software development firm, possesses extensive experience in creating effective .Net solutions for various platforms. So, if you are looking for a dot net development company, reap the benefits of our high-end .Net development services.