This post discusses the potential of Ruby on Rails as a programming language for developing web apps across diverse industrial domains. 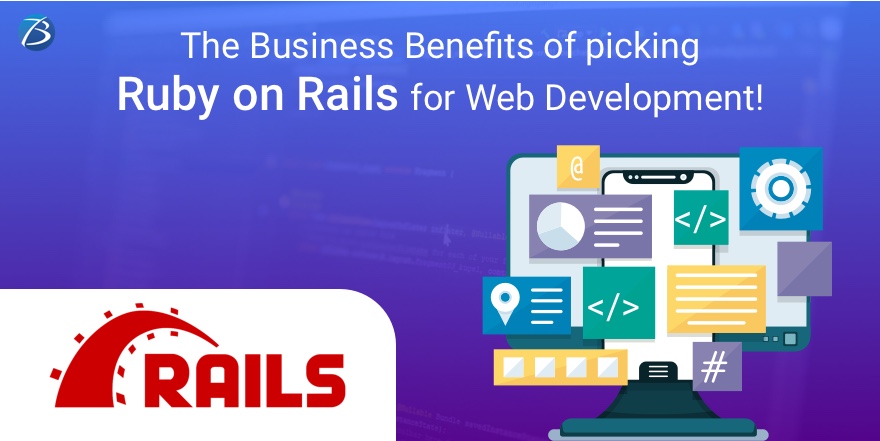 What factors do you consider while choosing a programming language for your web app development project? Scalability? Level of support? Ease of development? Cost? Availability of libraries? Or all of these? Well, amongst hundreds of programming languages available currently, Ruby on Rails (RoR) is one such language that offers all of these benefits. RoR is quite popular and highly preferred by several companies, right from start-ups to giants as a primary framework for web development. This technology is ideal for creating e-commerce sites as well as healthcare, retail, social media platforms, and content management systems.
Let’s explore the top reasons why Ruby on Rails (RoR) Development is widely chosen for developing web apps.

Why choose Ruby on Rails for Web Development? 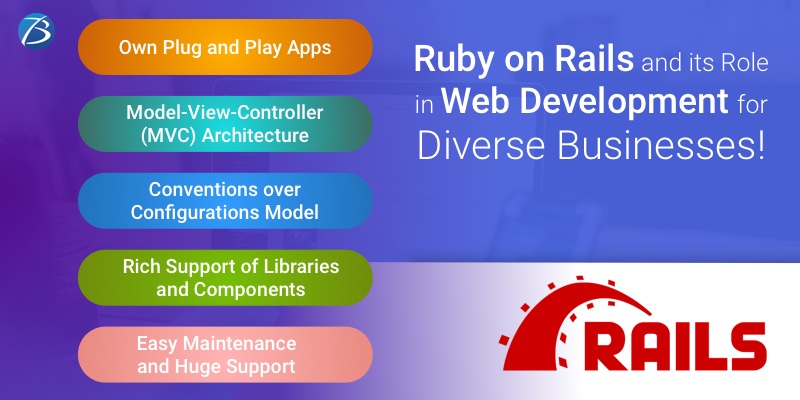 RoR is an open-source server-side framework used for cross-platform web development. It ensures fast and easy development of apps. It is written in Ruby, a dynamic and object-oriented programming language. It is distributed under the MIT license.
Take a look at the reasons why RoR is one of the best technologies to invest in!
Own Plug and Play Apps
In RoR, the programmers can develop building blocks for plug-and-play functionality. This allows adopting elements from the current apps built with RoR and using them in future projects. So, the developers don’t need to develop the same elements from scratch. One can develop multi-purpose, expandable apps in RoR.
Also, it is not easy to write user-friendly and structured code. However, RoR has plenty of ready-to-use tools, plugins, modules, and easily configurable components to help the developers write less code with more clarity and high quality.
In some programming languages, analyzing the starting and endpoint of the code is quite difficult. For fixing any issues, one has to start from scratch which can be time-consuming as well as costly. However, this is not the case with RoR. The technology is quite easy to comprehend and involves effortless methodologies for moving the code conventions from one developer to the other.
Moreover, when an application is developed, there could be the need to enhance the app later. And, entrepreneurs who invest in Ruby on Rails, reap the benefits of clean codes that prove to be a savior in this case.
Model-View-Controller (MVC) Architecture
RoR is based on the MVC (Model View Controller) architecture which supports parallel development i.e. many developers can simultaneously work on the app, that too on different pieces of functionalities. RoR has a simple and readable syntax and this enables RoR Developers to execute more tasks with minimal coding. For this reason, developers can implement the tests and evaluate the code, without the need for any third-party testing tools. It has many inbuilt solutions to support a variety of problems and also the support of the Ruby community.
Conventions over Configurations Model
RoR uses the “Convention over Configuration” model which is the key principle and a golden path for the RoR Developers. In this model, the environment (libraries, systems, language, etc.) assumes many logical situations instead of programmer-defined configurations. The developers don’t need to create their own rule every time. As a result, the decisions that the developers have to make while coding is reduced without losing flexibility. They don’t need to spend more time configuring the files. It saves the programming efforts, speeds up the development process, and improves productivity.
Rich Support of Libraries and Components
Ruby on Rails (RoR) Development is blessed with rich libraries, called gems. These libraries can be used to implement features like payment integration, authentication, etc. Also, there are generators in RoR, which enable the automation of basic CRUD functions. Modules are other powerful tools for Ruby developers, which help in the organization of Ruby classes, constants, methods, etc., and unify them into categories. The support of such features and libraries enables faster web app development. This framework also enjoys the support of a massive community that assist RoR developers to address the challenges faced during web development.
High Scalability
Scalability is what every business looks for while selecting a programming language for web development. RoR has high scalability which makes it quite popular. It supports caching out-of-the-box activity and allows viewing of fragment caching within the app’s code. It uses Redis for storing cache. A remote multi-server automation tool can also be implemented to automate the pushing of new app variants to the deployment location. Rails allow you to use Chef, the cloud infrastructure framework written in Ruby. The function of Chef is to manage the infrastructure dependencies, create the folder structures, bootstrap the complete system and update the system configurations with lesser commands. Also, the high scalability of the RoR improves the background activities and ensures a smooth user experience. This can be done using Sidekiq or Resque.
Easy Maintenance and Huge Support
RoR is quite easy to maintain and provides exemplary services due to the advantages of both Ruby and Rails. It is known for its stability and predictability. Adding new functionalities and making changes in the existing code can be done with ease. Especially in the case of bigger projects, upgrading the apps is possible without much complexity. And, if there is a need to substitute the development team, it isn’t a big issue for RoR applications.
RoR has ample support for a large community named RubyGems. They help in solving any issues and hosting solutions.

Some of the most reputed giants like Airbnb, Bloomberg, GitHub, Fiverr, Shopify, Basecamp, etc. have used Ruby on Rails Development Services for their projects. It is suitable for every industry- small or large. Overall, RoR is an excellent option to pick considering the factors like performance, coding, quality, community support, scalability, modifications, etc.
RoR is easy to learn, read and comprehend. It is written in simple English and uses a domain-specific language of its own. It is a well-established language having similarities in integration with languages like Python, Perl, etc. It is based on Agile software development principles which improve productivity and management of the project. Due to all such benefits, its demand has increased among the developers and business owners who want to develop mobile apps.
Hope this blog was helpful. If you are looking for a technology partner for RoR development, contact Biz4Solutions, a prominent Ruby on Rails Development Company to know more or any related services.