Get a rough estimate of the cost of developing wearable applications and learn about the factors that affect developmental expenses. 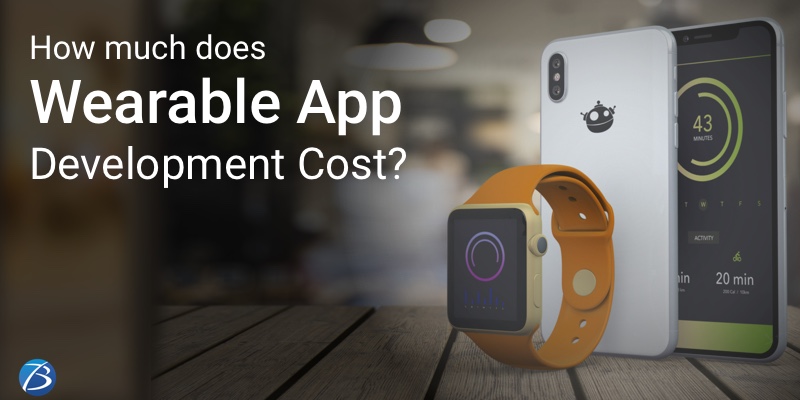 Today, a huge chunk of tech-savvy individuals own fitness bands, smartwatches, and hands-free GPS systems. Such wearable devices are empowered with new-fangled sensors, microprocessors, and chips supported by robust operating systems. And, just like smartphones, modern wearables support various apps that can be used for syncing data from users’ devices.
Wearable technology has worked wonders to enhance the convenience quotient of modern-day individuals. Here are some instances!
Using Recordr, an Android wearable app, users can record sounds from their surroundings by simply tapping an icon placed on the right side of their smartwatches.
Spotify enables users to listen to uninterrupted music, scroll through the playlists, adjust the volume, etc. without having to use a smartphone.
Travelers can gather crucial information concerning cabs, buses, trains, ferries, etc. with the Citymapper app installed in their smartwatches.
No wonder, the popularity and demand of wearable apps are skyrocketing! As such, entrepreneurs are keen to build wearable apps. And, many of you would like to get a rough idea about the development expenses. So, I have penned down the factors that affect the wearable app cost and provided an estimate on the developmental expenses. 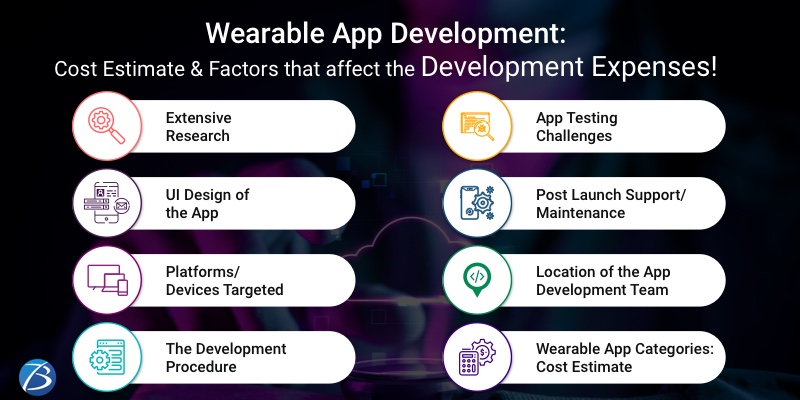 Extensive Research
Researching about the market and user base for understanding the specific requirements of target users, is an essential practice. This activity helps the software company to clearly define the project scope, eliminates unwanted glitches during wearable application development, and ensures the creation of an impeccable application. But, this research consumes a considerable amount of time and efforts. Most of the firms do charge for market research and this activity affects the price estimation of the project for sure.
UI Design of the App
The UI design of a wearable app is way different from that of an application developed for a tablet or mobile device. For example, a smartwatch needs to have four major interaction points – faces of the watch, voice commands, notifications, and independent wear native- based applications.
Watch Face: If the app is time-based, a watch-like look and feel need to be created.
Voice commands: Integrating the voice command feature within a wearable is trending these days. This feature enables users to use their voices for initiating commands. So, special attention and extra efforts are needed for crafting a voice-based user interface.
Notifications: Notifications display contextual and movable data, and deliver a seamless user experience. This feature helps users in replying to messages, searching for a location using a map, playing their favorite songs, and many more.
Wear Apps: These apps are likely to function without any smartphone connectivity. For building such independent applications, you may either follow a similar approach as in mobile app development or reinvent the wheel as per your specific needs.
Platforms/Devices Targeted
The kind of hardware devices and software platforms targeted affect wearable app costs to a great extent.
For instance, let’s compare the expenses involved for the Android and iOS platforms. Many of us are of the opinion that wearable development for the Android platform is less complex and involves lower costs. But, in reality, developing wearables for the iOS platform is speedier and more cost-efficient. The reason is Android OS powers a wide range of wearable devices. So, Android developers have to scale the app accordingly for providing support to varying screen sizes. And, the development costs for various screen sizes differ. Therefore, Android app development is costlier and time-consuming. Coming to iOS, it powers limited devices, resulting in lower development costs as well as faster time-to-market.
The Development Procedure
Wearable app development is slightly different from the standard mobile app development process. Android development involves fewer interactions, has access to standard Android APIs, and also leverages the APIs as well as features of a smartwatch. iOS development, too, comes with its set of specific requirements that spikes the wearable app cost. The good news is that Apple has launched a new version namely watchOS 6 along with some APIs that will enable in delivering a robust UX; and features that support developing autonomous watch applications.
App Testing Challenges
The testing and maintenance costs are higher for wearable apps as compared to other mobile app categories. The reasons are as follows:
Screen size: Wearable apps target varying screen sizes and so, need to test the app’s performance on different sized screens.
Battery Life: The battery life of the primary device needs to be tested extensively. For this, different instances are to be considered. One instance involves switching off the primary device to check how the data gets affected.
Data Syncing: To test the data syncing between a mobile app and its connected wearable app one needs to watch out for various scenarios like what happens when one of the devices gets switched off, how does the app perform when the Bluetooth connection gets lost, and so on.
A Dearth of Emulators: There are a few emulators available in the market and this expedites the Wearable app cost.
Post Launch Support/Maintenance
Newly launched wearable apps are likely to encounter unexpected glitches, downtime, or software failures. Needless to say, it’s advisable to hire technical support/maintenance wearable app development services for keeping up an app’s performance standards, preventing downtime, and averting incidents of wearable app failure when the load is high. These support services may be needed for multiple weeks post-app launch and incur additional expenses.
Location of the App Development Team
Wearable app cost is heavily dependent on the location of the app development center as the rates of hiring wearable app developers are not the same in every country/region. Take a look at the hourly rates for hiring developers from these regions:
India – between $10 and $75 per hour
Eastern European region – between $20 and $110 per hour
South American region – between $25 and $120 per hour
Australia – between $35 and $150 per hour
The UK – between $35 and $175 per hour
North America – between $20 and $250 per hour
So, your development cost revolves around the location of your outsourcing partner. Here, North America is the most expensive option and India is the most cost-efficient choice.

The Rise of Wearables in Mobile Application Development

All scales of companies are rushing to mobile app development companies to transform their business into a popular brand through Digital Transformation services. But that’s not the end. Companies are now interacting with their users through wearable devices. Here’s an interesting find that you would love to know: according to a report from the online marketplace, GlobeNewswire, the global market value of wearables is expected to rise at a CAGR (compound annual growth rate) of 17.2% between 2021-2025; and is predicted to reach 116.88 billion USD by the year 2025. That’s a terrific growth indeed!
The first thing that comes to our mind when someone says a wearable device is an Apple Watch. That’s correct. But do we have any device other than a smartwatch? Yes! For those of you who do not know, there’s Hololens from Microsoft that allows you to interact with virtual content and holograms. Exciting, isn’t it? Well, this is just the beginning.
The scope of wearable devices will definitely surge. Don’t be surprised especially when you see people with smart devices such as watches, clothes, shoes, spectacles, headgears, etc. You will be amazed to know that these gadgets will communicate with mobile apps to pass information seamlessly.

This revolution in mobile technology will change the dynamics of mobile application development services. Rather, not forget that IoT (Internet of Things) will empower these devices to act as remote controls to other devices and gadgets. Why are people embracing wearable apps/devices? The most important reason is that it’s helping people to tackle routine challenges related to various areas of fitness, education, media, healthcare, etc.
The dynamics of mobile app development are changing with wearable devices hitting the market. The most prominent changes that mobile app development would see are:
Ergonomic: The interface developed for the devices should have ‘just right’ information to be displayed to the user. Probably, this also includes the way these wearable devices would receive notifications – very concise.
Change in Screen Size: Screen Size changes mean a more user-friendly interface. That seems like a key area, mobile app developers should watch out for.
More Responsive: To make it more interactive to commands, the mobile application development company will work towards making apps more responsive. Users wouldn’t want to use slow apps because in that case, they would rather prefer to use traditional smartphones, isn’t it? Well, this also means apps will be developed with better computing ability.
Doesn’t require much power: As a user, you would always want a device that works the longest period without having to recharge, isn’t it? So, mobile applications have to be built keeping this fact very much in mind.
Highly Interactive: Wearable applications that respond to a voice command or hand gestures would become game-changers especially in the mobile app development arena. Hence, the above-mentioned points are a few of the areas where a major chunk of change will happen in mobile application development. Furthermore, there is no denying that there will be other relevant areas too. Technologies such as artificial intelligence, cloud technology, augmented reality, and IoT (Internet of Things) will have a major role to play and as a result, they will change the mobile app development landscape altogether.