Catch a glimpse of the key features, important updates and significant add-ons in Android 11! 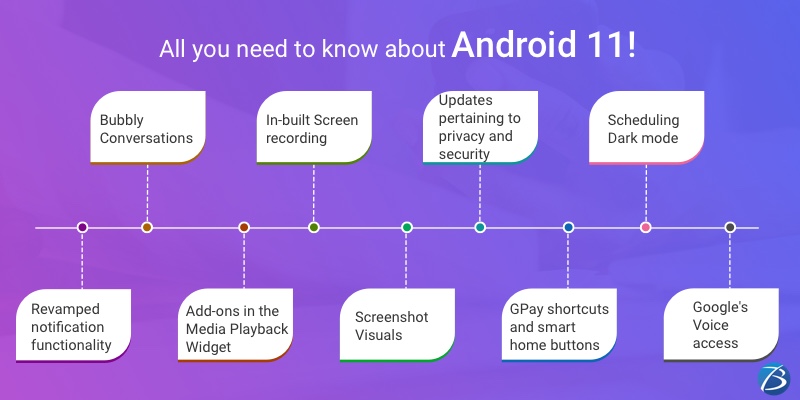 “Android continues to remain the most widely-used mobile operating system across the globe with a market share of 72.92%” statesa report published in October 2020 by the popular online research portal Statista.
Android versions have garnered popularity because of their numerous goodies like the availability of multiple features, the flexibility of usage, freedom of choice, etc. Furthermore, the dedicated Android team at Google keeps releasing updated versions at regular intervals to complement the latest technological innovations. The most recent Android OS version, Android 11, was released on September 8, 2020. Although this version is not as major an update as compared to the earlier version, Android 10; it introduces new-age features that will enhance the convenience quotient of Android users. Thus, comprehensive knowledge about Android 11 is important for users, Android app developers as well as Mobile app development companies.
This article gives you a peek into the striking new features and enhancements in Android 11.

Although, beta release of Android 11was delayed by Google, we now have a stable build based on their timeline. This update would be available to devices such as Google, Samsung, OnePlus, Nokia, Xiaomi, Motorola, Realme, Vivo, Oppo, etc.

Android 11: The notable Enhancements and Add-ons

Check out the new add-ons as well as enhanced features of Android 11!

Android 11 has brought about the following changes in the notification functionality.

Direct conversations are displayed at the top of the notification shade and are segregated from alerts concerning shopping, news, etc. Some conversations can be converted into bubbles. These bubbles appear in the form of round floating buttons and one can maximize or minimize the chat within a floating window by tapping on these buttons.

Add-ons in the Media Playback Widget

The erstwhile Media Playback Widget has some new changes and additions! In Android 11 the media player widget is available from the drop-down menu of the quick settings section. The new media player widget offers a background with matching colors to the album called art and provides a spectacular ripple animation whenever the users use ‘play’ and ‘pause’ button.

Android 11 comes with an in-built screen recorder that captures the internal audio of a device while screen recording. This was not possible with earlier versions as third-party screen recorders had to be installed. To use this new screen recorder, one has to just tap the ‘screen record’ option available in quick settings.

Android 11 also introduces an iPhone-like feature. The screenshot taken is displayed within a small thumbnail at a corner below the display screen, for easy viewing. The ‘share’ and ‘edit’ buttons are available for hassle-free sharing. In case the user wishes to dismiss the screenshot the option ‘X’ needs to be clicked.

The Google team has loaded Android 11 with futuristic features and has taken generous efforts to ensure the security and privacy of users. Therefore, upgrading to Android 11 is advisable for all the users to whom this version is available.
Planning to create a profitable mobile application for your business? Well then, reach out to the highly skilled and experienced Mobile app developers of Biz4Solutions, a reputed mobile app development company that excels in providing premium services to clients around the globe. 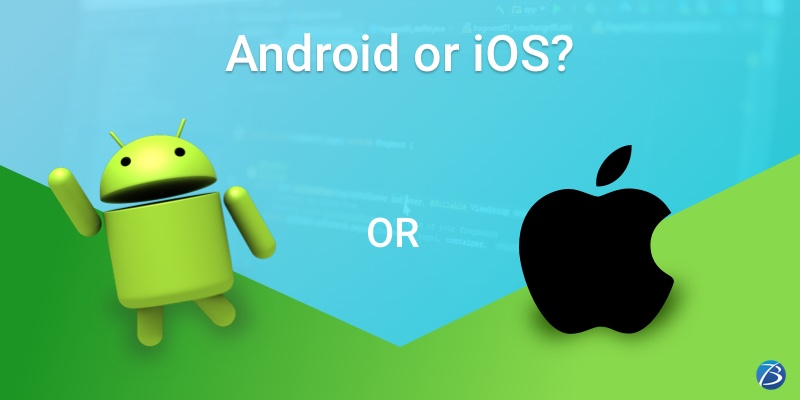 In October 2020, Android and iOS jointly contributed to almost 99% of the global market share, as per a report shared by the renowned market research portal- Statista. Android alone contributed to 72.92% of the market due to its affordable costs and ease of use as compared to other platforms.
These staggering numbers indicate the huge popularity of Android and iOS platforms in the mobile app development world. But when it comes to developing the apps, the majority of businessmen and entrepreneurs find difficulty in choosing the right platform. Due to the lack of knowledge about each platforms, they prefer at times creating apps on both platforms; however, it is always smarter to initially go with one of them as it reduces risks and keeps the costs to the minimum.
So this blog will help you to gain insights on choosing the apt platform for your app. Through this blog, we will compare some significant factors like target audience, budget, features, timelines, and many more for both these platforms. It will help in making an informed decision. But before starting, let us have a quick look at the pros and cons of both.

Android or iOS App Development? Choosing the Best Platform for Your Business!

Where is your target audience located?
Usually, Android is preferred more in the developing nations while iOS is highly used in the developed nations. Android’s presence is much stronger in Asia, Latin America, Africa, etc. while iOS is dominant in North America, Western Europe, etc. So, to reach the global audience, businesses should consult Android app development services that have a global outreach.
Also consider factors like the average age of your audience, their income ranges, educational backgrounds, etc. The audience with higher incomes and better educational backgrounds tend to prefer technically advanced iOS devices. Younger customers focus more on in-app purchases while older customers are willing to buy the apps altogether.

Cost is one of the most significant considerations for mobile app development. It depends on the scope of the project, features to be embedded, complexity of the app, how many OS versions and devices are required, etc. So, at times, both iOS and Android app development can be equally expensive.
Yet, iOS app development is considered somewhat cheaper than Android. This is so because coding in iOS is comparatively easier. Android apps need to be written in Java which requires more writing than Swift language for iOS.
But when it comes to publishing the app, Android charges a one-time fee of $25 while iOS charges an annual fee of $99 for individual iOS app developers and $299 if a company publishes the app.

Features to be Embedded in the App

What features are you looking for to be integrated into your app?
If security and superb aesthetics is your priority, iOS is the perfect pick. But if you are looking for highly customizable apps that meet the end-users expectations, Android should be your choice.

When it comes to the complexity of mobile app development, iOS is a clear winner over Android due to the difference in device fragmentation and programming language used.
iOS development is quicker than Android. In the case of Android, there are a host of devices like smartphones, tablets, etc. with diverse screen sizes available in the market. As a result, creating an Android app that is compatible with all of these, becomes a complex process.

How early do you want your app to be released in the market?
Well, as we already know, Android has a bit complex development process due to a variety of devices available. Also, an Android app needs to be tested on all such devices which again is a time-intensive process. So, comparatively, Android app developers need to do a lot of work increasing the time-to-market. Consequently, businesses who want their app to be out in the market at the earliest prefer iOS development.

To make your app lucrative, you need to choose the platform that will prove to be more profitable. Android has a bigger market share, however, iOS contributes to higher revenue generation. In 2017, Revenue generation for Apple Store was about $38.5 billion while for google play it was $20.1 billion. So, it is quite clear that iOS apps generate better revenue.

Selection of the right platform plays a key role in the success of your app and your business. Both- Android and iOS platforms have their pros and cons and so, we cannot comment on whether one of them is a perfect choice. They have diverse purposes to serve. Android app development is a great pick if you aim to reach a broader market while iOS app development is perfect when your target audience belongs to a region where iOS devices are being used extensively and quality is your top-most priority. So, this decision depends completely on your business goals and the requirements of your target audience.
I hope the blog was insightful and will help you in the decision-making!
Feel free to share your thoughts, experiences, and queries with us in the comments.
Page 1 of 3123»