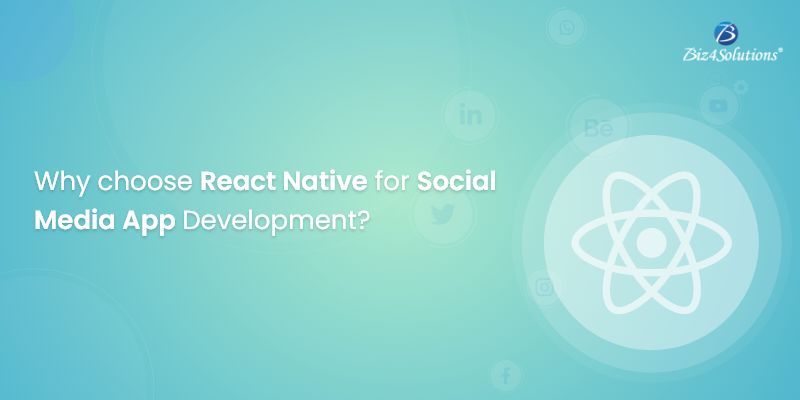 The React Native architecture proves highly advantageous for mobile app development! Before the coinage of the React Native framework, mobile app development encountered certain bottlenecks. One such roadblock was creating a unified codebase for mobile and web apps. Business brands that lacked adequate resources and funds to engage native development teams for crafting applications for Android as well as iOS; were left with one single option – employing web viewers such as Cordova or Ionic. And so, app creators had to settle down for mobile web apps or HTML 5 apps. Unfortunately, these web view apps were ported over version of the app’s website and failed to deliver a good UX – the user experience seemed fake and clunky.
The launch of React Native in 2015, by Facebook as an open-source project, came as a breather for app owners – React Native development resolved multiple stumbling blocks that were posing challenges in mobile app development.
Have you ever wondered why a major chunk of the social media applications like Facebook, Skype, Pinterest, etc. are built in React Native? Let’s explore the reasons! 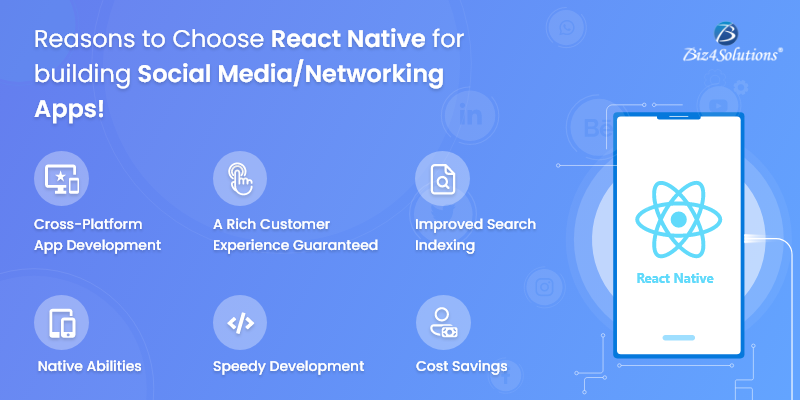 React Native allows businesses to build a software app solution that will function across the Android, iOS, and web; using the same programming language – JavaScript. For instance, before the advent of the React Native framework, developers had to use Java for Android-based apps and Objective-C or Swift for iOS-based apps.

Modern users are least likely to use an app if it takes a long time to load and so, a social media app must be performant to provide a great UX. React Native apps load faster as the framework employs UI elements that compile into one native application. These apps are competitive and guarantee a high UX to consumers.

React helps you to develop scalable and reactive apps. And, React Native enables the front-end web developers to write the code for native cross-platform applications without the need to jump through hoops for learning a new language. Moreover, since React Native involves only JavaScript, one can use any of the JavaScript libraries starting from Loadash to the most obscure of packages for app development projects. These goodies further speed up the development process.
Moreover, the availability of several ready-to-use free tools and libraries allow React Native developers to speedily craft social media app features like social sharing. Furthermore, due to the presence of a huge, dynamic, and helpful dev community, changes can be executed quickly without any hassles.

A social media app must make its presence felt on popular search engines like Bing and Google. But search engine crawlers are unable to render JavaScript and return a blank page and as such, Google does not index the page altogether. The lack of search engine optimization adversely affects server-side rendering. However, React supports server-side rendering of JavaScript which results in a pre-rendered HTML page that is ready-for-display on the browser. And, the crawlers are able to crawl HTML without any glitches and the app appears on user searches.

How does React Native cater to Specific Requirements of Social Media App Development?

The fundamental objective of this framework was to utilize the advantages of web development – quick iterations and engaging one single team for executing the entire project – while architecting mobile applications for the iOS and Android operating systems.

This is the first full-fledged cross-platform app built in React Native by the Facebook team. The platform is leveraged by entrepreneurs as well as individuals for promoting their products and managing ads for the same.

How React Native development was helpful?

The platform is leveraged by entrepreneurs as well as individuals for promoting their products and managing ads for the same.

Pinterest creators used React Native so that codebase can be shared across Android and iOS. It took only ten days to implement on the iOS platform. Thereafter, Android implementation was completed in just two days as developers were able to share 100% of the UI code for the Android platform as well. This way the firm saved over a week as compared to the usual implementation time.

In 2017, Skype’s owner Microsoft redesigned the platform using React Native for their mobile version as well as the desktop version.

This popular React Native app is used by millions of individuals for connecting with friends/family/communities via voice, text, and video communication. React Native development has made it possible to share 98% of the code across the Android and iOS platforms. The team was able to effortlessly able to make their comprehensive iOS app run on the Android platform in just two days.

Above examples indicate that the React Native framework can create innovative, highly performant social/networking apps that are rich in trending features.
Would you too like to harness the potential of React Native for tailoring feature-rich social media/networking apps? Reach out to Biz4Solutions, a distinguished mobile app development agency offering high-end React Native development services to global clientele for 11+ years. Tell us your social media app requirements and objectives; our proficient team will help you to fulfill your goal.