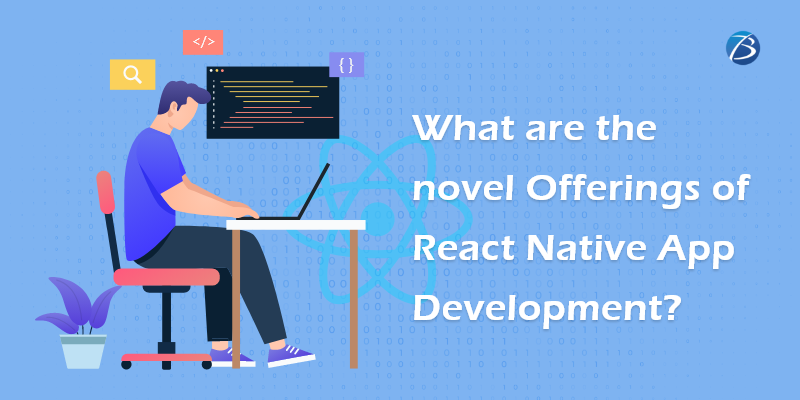 As per the Stack Overflow Developer Survey 2021, React Native bags the 6th rank for the most popular application development frameworks. Biggies like Facebook, Skype, Instagram, Uber Eats, Bloomberg, Pinterest, Walmart, Wix, Discord, and Sound Cloud Pulse have leveraged the potential of the React Native framework to reap exceptional outcomes.
Wondering why React Native is so popular? This post answers it all! Check out the unique offerings, disruptive advantages of React Native App development, and its relevance till the date. 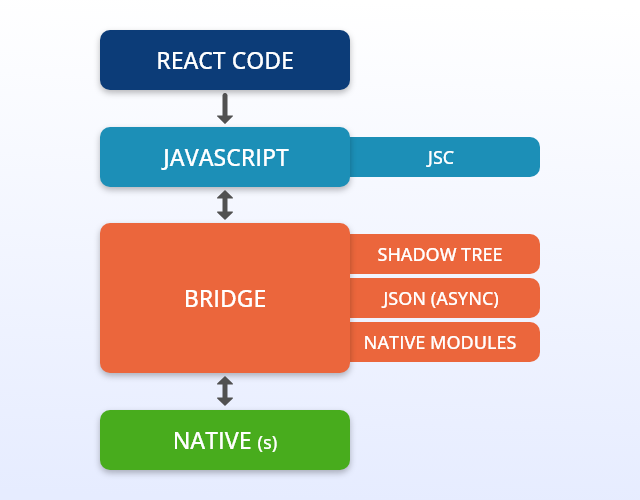 Source:
Here, the React code is created by the developer, from the code JavaScript is interpreted eventually. The series of elements are together called the bridge. We will learn more about this bridge later in this post. Then there’s the Native Side as well.
Let’s look at how the React Native application functions: 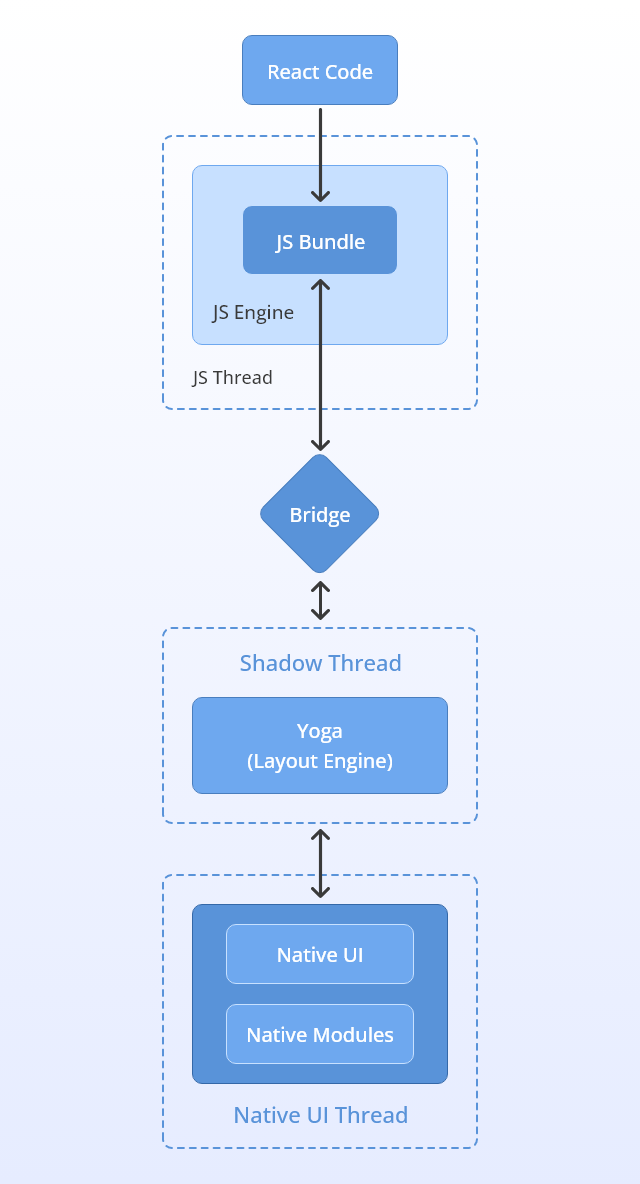 When the user clicks on the app’s icon, the native thread loads all the native modules and dependencies. Thereafter, the native thread starts the JS thread that loads the JS bundle. A serialized message is then sent by the JS thread using the bridge. This message contains instructions on how to render UI on the native side. The messages are received by the shadow thread and the UI tree is formed. Now, based on this UI tree, native components are generated by the Yoga layout manager. These generated native components contain the dimensions meant for a particular device or platform. These are then passed on to the Native Thread for rendering. Components are drawn on the screen by the Native Thread.

Reasons to Pick React Native over other Frameworks & Technologies 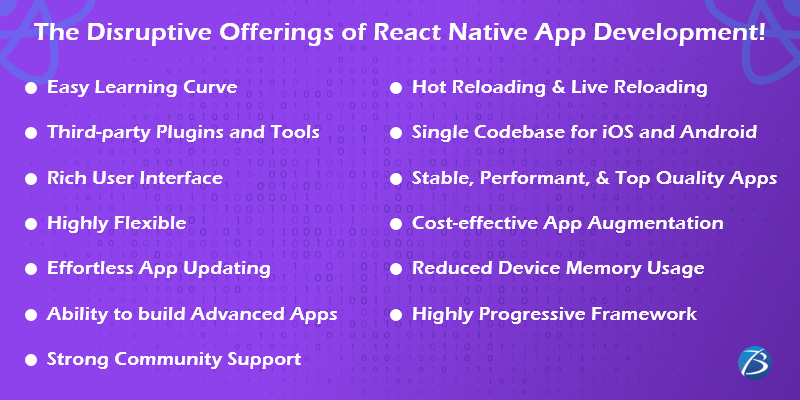 The features Hot Reloading & Live Reloading are indeed lucrative functions that transform React Native app development. Hot Reloading allows developers to work on the code modifications in real-time while the application is still running. With Hot Reloading, only the portion of the app where the change was made gets reloaded instead of the entire app, while with Live Reloading, the app gets automatically reloaded after the changes are executed. Also, the changes made to the code are reflected instantly on another live preview window. This way, developers can carry out code modifications and view the outcome simultaneously. This real-time feedback while coding proves beneficial in the development as well as testing processes.
Developers can leverage these functionalities for testing new features and maintaining the application’s state at the same time. As developers can view the changes made while coding, the likelihood of errors reduces to a great extent, making way for bug-free code.

React Native app development involves an easy learning curve. If a developer is well versed in JavaScript, there isn’t any need for learning other programming languages or coding syntaxes. The developers just need to understand which mobile app components match with which web app components. And, since JavaScript is a popular technology, it’s easy to find the required expertise.

React Native supports numerous third-party plugins and APIs that make app development a breeze. Any necessary tool, plugin, or API that is not offered by the React Native framework can be integrated quite easily. With all essential components available, one can create an engaging & interactive user interface and compelling features. There are a wide range of React libraries that offer various app development elements such as animations, forms, etc. and features like Google Maps, Google Calendar, etc.

A Single Codebase for the iOS and Android Platforms

While architecting React Native mobile apps, developers create a single codebase that works for iOS as well as Android operating systems. Codebase gets compiled to the native codes in Swift and Java by creating a bridge between the UI components and their equivalent Swift/Java components.
As such, mobile app creators targeting both iOS and Android need not hire two separate teams with specific skillsets for developing separate applications. This strategy is not only budget-friendly but also reduces the time to market, thereby offering a competitive advantage to businesses investing in mobile app development.

React Native makes use of declarative syntax. So, while developers write the code, the execution process is taken care of by the RN framework itself. Besides, pre-built declarative components are used to design the frontend UI library that makes the UI simple as well as intuitive.

React Native is a stable framework and has turned out to be one of the best picks for crafting mobile apps. One can build mobile apps that have a slick, responsive, and smooth user interface and boast of faster load times.
React Native development produces apps that offer native-like experiences. React Native mobile apps are speedy since the programming language has been optimized for mobile devices; GPU (Graphics Processing Unit) is employed, instead of the CPU (Central Processing Unit).
React Native apps involve two threads – the UI thread for interface creation tasks like drawing buttons on canvas and the JS thread for carrying out computations, handling events, etc. This leads to high performance if the development process is executed properly. Furthermore, unlike many other cross-platform frameworks, React Native uses native APIs in place of Webview for code rendering; resulting in improved performance.

React Native outshines most cross-platform frameworks in regard to flexibility. The reason is the React framework is based on a modular and component-based architecture. The code is broken down into smaller reusable fragments; these can be taken and embedded wherever needed.
Therefore, for app creators using React Native, you are not bound to this framework only. You have the flexibility to switch to other app development frameworks without much ado. For instance, your app is in React Native and you wish to switch to purely native operating systems. In such cases, you need not reinvent the wheel. Developers need to export the app from React Native and move it to the Android platform using Android Studio and iOS platform using Xcode.
Also, you can create platform-specific codes by coding natively in Xcode with Swift alongside React Native app development. So a native iOS app can be compiled with the React Native ecosystem. You can program native features in iOS directly with Objective-C or Swift, if some desired app features are not available in the React Native environment.

React Native makes it possible to augment existing apps in a budget-friendly manner. This is because React Native UI components can be embedded into an application without the need for rewriting the app entirely. One can add a single view or user flow to already existing apps. Moreover, React Native-based functionalities, screens, views, etc. can be added quite easily.

Earlier, updating an application with new add-ons was a complicated, cumbersome, and time-consuming process. Developers had to carry out a build process once again and this build process had to be conducted separately for each OS.
The advent of React Native has streamlined the procedure of app updating and made it much simpler & faster as well. Now, apps for both operating systems can be updated at the same time. The app updates and enhancements are implemented by developers using the OTA (over-the-air) update methodology. This method enables updating the app while it is being run by users. The next time users open the app, the app is ready to run with the new enhancements. Besides, React Native supports “Code Push”, a Cloud service by Microsoft. With Code Push, developers can update an app directly without the need for updating it from the app store. Moreover, React Native involves an easy-going binding strategy for the codebase. So, to modify an object developers simply have to change the object’s state before implementing updates.

Reduced device memory usage is one of the most desired features amongst modern-day app users and React Native mobile apps perfectly suit this requirement. In React Native, the module can be effortlessly connected with the plugin using the native module; as WebView is not used. This phase is linked directly to the features related to app outcome and hence, the app responds quicker. Most codes are used during the run-time without the need for cross-bridge linking. So, React Native apps consume much lesser device space as compared to other applications.

React Native enables one to handle complexity with ease. The framework functions with a component-based interface. Hence, one can plug-n-play the elements of the interface to create advanced apps. Things get further simplified as complex algorithms are broken down into easy-going formats. Besides, Facebook’s UI library simplifies the coding process and the Hot Reloading function eases implementing changes in the code.

Ever since its inception in 2015, the React Native framework is constantly being enhanced with novel add-ons by the massive React native community as well as by Facebook. Whenever the framework was unable to address the problem, the RN community and Facebook team were quick to offer an apt solution to the issue, sometimes in just a few months.
Even the tech giant Microsoft recognized the potential of React Native and has created their fork named “React Native for Windows.” This solution comes with distinct offerings that allow one to effortlessly develop applications for Windows 10 Mobile, Windows 10, and Xbox One.

React Native enjoys the support from a massive community. The community boasts of 8500+ stars on GitHub and 2000+ contributors from across the world. The developer community has created numerous libraries that extend help with React Native app development. Apart from the community, several leading companies including Microsoft, Facebook, Infinite Red, Callstack, and Software Mansion have come forward and taken initiatives to improve the framework as per the latest trends. Websites like Native Directory, JS.coach, etc. and platforms like Reddit, Codementor, Stack Overflow, etc., also offer assistance with React Native development. As such, React Native developers have loads of options to utilize if they are stuck with issues and need assistance.

Can React Native be used to develop 100% Native apps or just native-like apps?

React Native app development produces native-like apps, applications that look and feel like native apps. However, React Native apps are not 100% native and do not function exactly like true native apps. One of the key shortcomings of non-native apps is their inability to closely integrate with the system like purely native apps.
To cite an example, the native app Gmail offers exceptional functionalities. It involves a worker that check users’ inbox and the users’ Gmail accounts are synced with the app as well as the entire mobile system.
Here’s how you can achieve native app functionalities with React Native development. The major chunk of the app can be created using React Native. And, native technologies can be used for crafting the essential app components that are required for integrating the app into the native system completely. For this, your developers need to add Swift or Java code for the relevant features and specific cases.
Hence, with some additional efforts, you can leverage the lucrative offerings of React Native app development and at the same time, build an app that functions like a native app.

The most impressive traits of React Native development are that it guarantees speedy project delivery and cost-effective investment. Moreover, this framework is suitable for developing any kind of app apart from gaming apps that require heavy graphics. However, it’s important to take care that the development process is carried out as per the standard best practices. So, partner with an experienced React Native app development company for obtaining the best results out of the React Native framework.