Every start-up entrepreneur desires to reach out to a wide range of audiences and aspires to grow exponentially. And, having a digital destination for a business is essential for fulfilling these aspirations. Nevertheless, the software development approach, frameworks, and technologies for building a digital platform should also be chosen wisely.
A majority of start-ups adopt a cross-platform software development approach to craft mobile/web apps for multiple platforms using a single codebase. This approach saves development time, effort as well as expenses.
And, amongst several cross-platform app developments frameworks, the Ionic framework has been one of the most preferred ones for start-up app development. Ionic, empowered by open web technology, has helped several start-ups to transform their vision into reality by offering unparalleled cross-platform app experiences. Untappd, Cryptochange, ChefSteps, Sworkit, Pacifia, Marketwatch, etc. are examples of the world’s fastest-growing start-ups who owe their success to Ionic app development.
This blog introduces you to the Ionic framework and outlines the reasons why it proves beneficial for cross-platform app development. 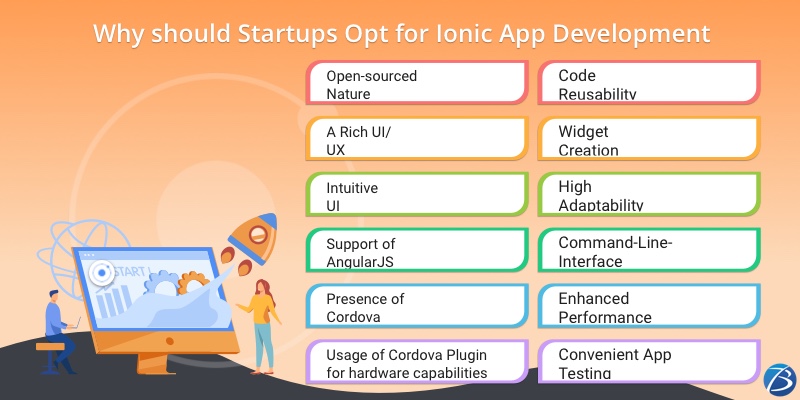 Open-sourced Nature
for them. And, Ionic, being an open-sourced framework, licensed under MIT, offers several cost-efficient options for app creation. Moreover, while other open-sourced frameworks may encounter unexpected architectural breakdowns during app development, Ionic handles these issues effectively and hence, is considered to be steady as well as dependable.
A Rich UI/UX
A rich UI/UX design is the key prerequisite of a top-grade mobile app and Ionic fares well in this aspect as well. This front-end framework comes with captivating designs and contains components like JavaScript, HTML, and CSS. As such, Ionic mobile app developers can reap the benefits of smooth animations containing beautiful designs and themes to build interactive and user-friendly apps.
Intuitive UI
Ionic’s ecosystem comes with a humongous repository of customizable themes that enable the creation of a highly usable app with a dynamic UI. The app components automatically adapt to the app development platform used.
The Support of AngularJS
AngularJS, one of the most versatile app development frameworks, forms the base of the Ionic framework. The presence of AngularJS imparts a robust structure to the developers for making the code more manageable, provides a host of features to app designers, and leads to the creation of an interactive app solution.
The Presence of Cordova
The Ionic framework uses Cordova, a mobile app development framework created by Adobe Systems. Apache Cordova enables Ionic to access and utilize a mobile device’s hardware like camera, contacts, geolocation, etc. For this purpose, Cordova plugins need to be used. This functionality helps Ionic mobile app developers to craft highly competitive apps.
Advanced Integration Abilities
Ionic allows integration with a vast range of add-ons, plugins, and modules for Cordova and AngularJS. The plugin repository of Angular consists of 2000+ modules and because of this advantage, Ionic apps can easily integrate with popular web services that implement complicated UI elements.
Moreover, the app integration abilities of the Ionic framework allow the sharing of information and processes amongst various enterprise applications. Because of this feature, enterprises can easily coordinate their business processes and link them with cloud applications.
Code Reusability
Ionic codes are highly reusable. The codes written by Ionic app developers for one platform can be effortlessly used across other platforms too, eliminating the need for creating different platform-specific codes.
Widget Creation
Ionic app development supports the creation of widgets. With the help of widgets, the frequently used applications can be embedded into the home screens of smartphones, such that the users can trigger the app from the home screen itself.
High Adaptability
Switching to the Ionic ecosystem is effortless as most developers are well versed with programming languages like CSS, HTML, and JavaScript. So, it is advisable to use Ionic while switching from native to the hybrid app as it eases out the whole process.
Command-Line-Interface
Ionic offers Command-Line-Interface, commonly known as CLI which is an in-built development server. This interface is text-based wherein users activate the command “prompt” for interacting with the Ionic app via different commands.
Enhanced Performance
Ionic’s CSS transitioning technology provides a considerable amount of leverage for the GPU. As such, the processing time can be effectively maximized resulting in the speedier functioning of the app.
Convenient App Testing
The Ionic framework simplifies the process of app testing by offering multiple convenient testing options. An Ionic web app can be tested on the desktop browser and in the case of Android and iOS apps, simulator testing is conducted by employing Cordova commands. iOS apps can also be tested using a Safari web browser or a mobile browser. An Ionic app development team can directly test the app as a hybrid/native app on a real platform for gaining more precise insights on its functioning. Besides, these testing methodologies facilitate remote debugging as well.

Thus, employing Ionic for developing cross-platform apps is a profitable option for start-ups. Ionic not only saves the time and resources of app owners but also comes with innumerable outstanding offerings.
If you are looking for hiring an Ionic app developer or an Ionic App Development team, contact Biz4Solutions. We are a distinguished Ionic App Development Company in India and U.S.A. with an excellent track record in mobile/web app development and a rich experience of partnering with global clients.