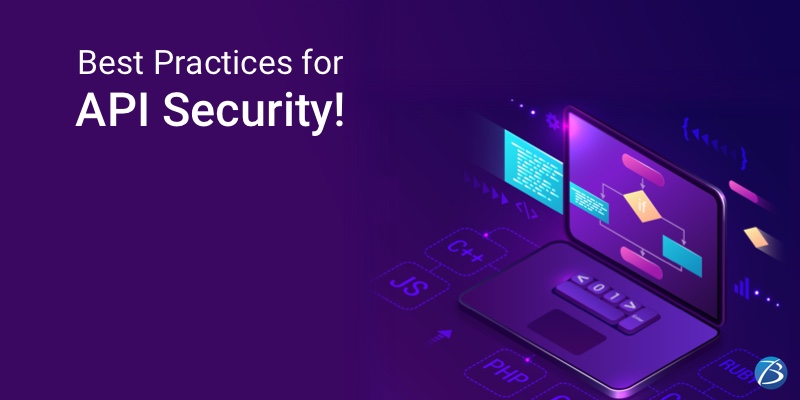 An Application Programming Interface, commonly known as API, refers to an intermediary that enables the exchange of information between two independent software components/platforms and ensures that the information reaches the right place. An API acts as a mediator between the external and internal software functions; making the information exchange process as seamless as possible. It not only offers protocols, tools, and routines to software app developers but also allows one to extract and share data in an accessible way.
APIs are indispensable in the realm of software development, but at the same time are highly vulnerable to attacks by hackers who exploit them for malicious gains. External APIs have public-facing endpoints and are susceptible to hacking; while internal APIs can be improperly accessed or misused. Since APIs interact with your web or mobile apps, securing them should be your priority.
This post outlines the adverse effects of API security breaches as well as the best practices to follow for ensuring API security.

What are the consequences of an API Security breach?

API security breaches often expose confidential data belonging to an Offshore Software Firm or their clients. As such, one such instance may result in the affected business enterprise losing credibility and encountering dire circumstances. Several such incidents have made headlines in recent years risking the reputation of firms and ushering in global security risks.
Take a look at some instances of API breaches and their repercussions. 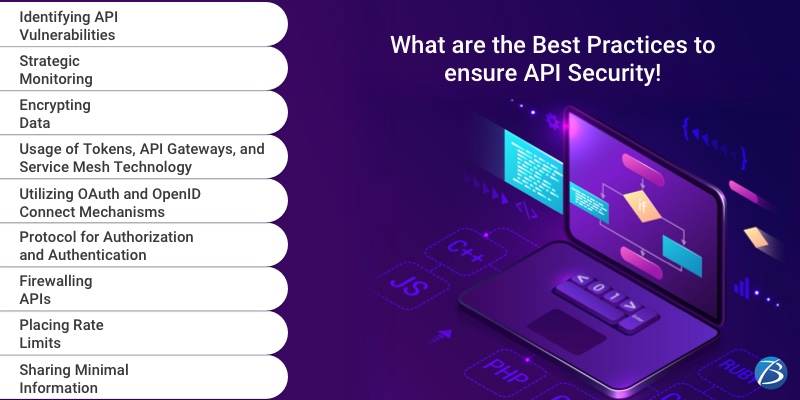 Identifying API Vulnerabilities
For securing your API against security threats, you must first identify the parts of the API lifecycle that are vulnerable to security risks. But, this task becomes quite challenging as software companies may use thousands of APIs at a time. The best ways to detect the security loopholes are scanning for the incorrect code and conducting extensive testing.
Strategic Monitoring
Monitor consistently and be ready to troubleshoot whenever any error is detected. For this, you need to audit, log relevant information on the server, and maintain that history as long as it is logical in the matter of your production servers’ capacity. In case any issues crop up and you need to debug; your logs need to be turned into resources. Monitoring dashboards can also be used for tracking your API consumption. Remember to add the version in the paths of all APIs. This will allow the functioning of several APIs of various versions and also enable the retiring and deprecation of one version over the other.
Encrypting Data
All data should be encrypted employing TLS (Transport Layer Security) and signatures should be made mandatory; for ensuring that only authorized users can access, decrypt, and modify data.
The usage of Tokens, API Gateways, and Service Mesh Technology
The usage of tokens is a sound API security practice. Access tokens enable an application to access your API. An access token is provided after the completion of the processes of authentication and authorization. Using these tokens you can build trusted identities and then assign tokens to those identities for controlling access to the API.
An API gateway acts as a single point of entry for all API calls. A good gateway enables enterprises to not only authenticate API traffic but also analyze and control how APIs are used.
The service mesh technology employs yet another layer of control and management by routing requests from one service to the subsequent one. A service mesh optimizes the combined functioning of all these moving parts and also establishes proper access control, authentication, and other security measures.
Utilizing OAuth and OpenID Connect Mechanisms
It’s a good idea to delegate the task of authorization and authentication of your APIs utilizing OAuth and OpenID Connect.
Using OAuth you need not have to remember endless passwords and rather than opening an account on each website, you can connect via the credentials of a third-party provider. OAuth allows clients to get secured delegated access to the server resources on behalf of the resource owner. This mechanism is leveraged by biggies such as Google, Amazon, Facebook, Twitter, and Microsoft.
Coming to APIs, the API provider depends on a third-party server for managing authorizations. So, the consumer, instead of providing their credentials, provides a token obtained from the third-party server. This way the consumers’ credentials are not exposed thereby securing them, and the API providers need not worry about protecting the authorization data since they receive only tokens.
OAuth is used as a delegation protocol for conveying authorizations while OpenID Connect is an identity layer added on top of OAuth for offering additional API security and authentication.
Protocol for Authorization and Authentication
Several APIs are easily discoverable making them an easy target for hackers. This issue can be resolved by following the practices listed below.
Firewalling APIs
Firewalling works wonders in protecting APIs. API security is arranged into two layers as follows.
Placing Rate Limits
The higher the popularity of an API, the greater are its chances to encounter malicious attacks like DDoS. DDoS attacks are executed by sending continuous calls until the server crashes. However, setting rate limits is an ingenious way to prevent such attacks on an API and to control the issues that adversely affect its performance. A rate limit controls how often an API can be called. Moreover, placing a rate limit throttles unauthorized connections as well.
Sharing Minimal Information
Check out the best practices on how to share minimal information.

I hope this post has conveyed how important it is for business organizations to incorporate API security practices. If you are looking for an IT firm for assistance concerning API security, picking an efficient and experienced Offshore Software Development agency would be a wise decision.