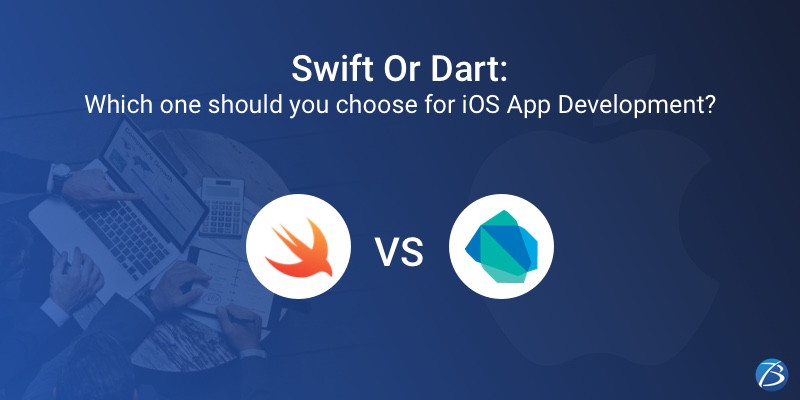 Swift is an open-source programming language and is entirely dedicated to native iOS app development. It was developed by Apple and came into being in 2014. Swift had gained a lot of traction in the developer community and is preferred over Objective-C for building iOS apps.
It is an interactive, secure, and speedy programming language that integrates the best of both worlds – the wisdom of Apple’s engineering culture and the thought processing of new-age programming languages. Its compiler is optimized for performance and at the same time, the language itself is optimized for development.
Swift is an intuitive and powerful language that comes with some disruptive offerings including speedy coding, imaginative methodology, and intensive documentation. Moreover, it is conducive for mobile app development, ensures security, and creates software that runs very fast. Furthermore, the design patterns of Swift can be utilized for work area, web, and worker apps.
Coding with Swift is not only interactive and enjoyable for iOS developers but is also concise and yet, expressive. Most of the iOS devices including Apple watches, iPads, Apple TV, etc. are programmed using Swift.

Dart is a Google-developed open-source programming language that was launched in 2011. Dart is used for building iOS as well as Android apps having a solitary codebase.
Dart is a client-optimized programming language for crafting fast apps. It provides a native-like look and feel, to both iOS as well as Android applications, thereby saving the time, cost, and efforts of developing apps for these two platforms separately.
This mobile software development kit (SDK) forms the foundation of the Flutter framework. It powers Flutter apps by offering the language and runtimes. It also supports several core tasks of developers including formatting, analyzing as well as testing the code. 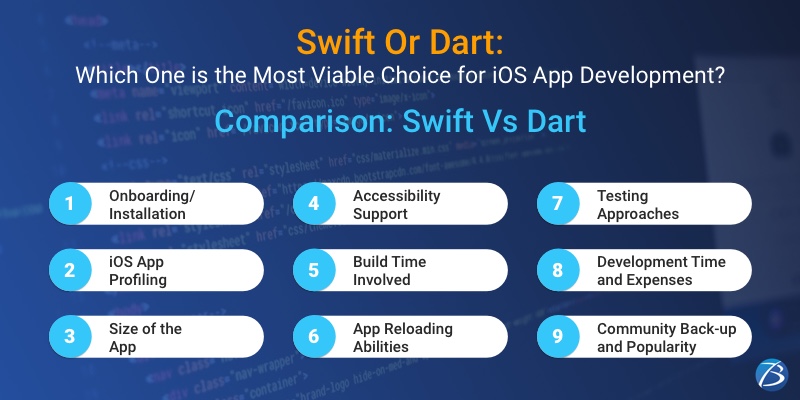 Take a look at the differences between Swift and Dart in terms of iOS app development requirements based on the following parameters.
Onboarding/Installation
The first step in iOS app development is onboarding – the process of downloading and installing the Integrated Development Environment commonly called the IDE. Once this IDE is set up, it provides a Software Development Kit (SDK) that is used to begin coding.
The only tool required for iOS mobile app development with Swift is XCode which has to be installed on the Mac OS device. Dart, on the other hand, needs a larger toolkit as compared to Swift to create binaries for coding. Dart developers use XCode, a Mac device, and an IDE such as Android Studio or IntelliJ IDEA for this purpose.
Inference: Swift needs lesser onboarding tools than Dart, though both of these involve an easy configuration process!
iOS App Profiling
Profiling refers to the process that estimates how an iOS app will be presented. This process revolves around the CPU, memories, and assets.
Swift uses XCode which provides a comprehensive framework that enables one to monitor an iOS app. Here, there are certain layouts that can be used for different profiling tests including the Time Profiler. The Time Profile allows one to evaluate the CPU strings in multiple occasions. This way, you can assess an iOS app’s performance, focussing on the resources, memory, and the CPU.
Dart comes with exceptional documentation concerning app profiling. Here you can use either an IDE or an order line to indicate the time required for Dart app profiling.
Inference: Win-win situation between Swift and Dart!
Size of the App
Dart applications turn out to be bulky in terms of size as its engine doesn’t permit the app size to be smaller than a specific value. Contrarily, the apps created with Swift are smaller in size.
Inference: Swift is the winner!
Accessibility Support
Accessibility support refers to an app’s capacity to cater to the needs of individuals with disabilities. Accessibility was considered as an optional feature earlier but now has become an essential function to include while developing apps, particularly in iOS app development. Today’s applications must be accessible to everyone, including the ones with physical disabilities.
Swift comes with an iOS native-owned in-built feature, a UIKit that offers accessibility support features, and so, you need not import any other framework for this purpose. The only aspect that needs to be taken care of is providing the correct accessibility to each UI element duing the process of swift app development. However, Dart lacks this feature, and to include this function, Dart developers need to employ the Accessibility Inspector of X-code; as suggested in Dart’s documentation.
Inference: Swift outshines Dart!
Build Time Involved
The build time refers to the time taken for creating a clean build (A build that is not incremental or a build that doesn’t contain any derived data). And, the build time happens to be a crucial aspect for a developer because the more the build time the higher is the cost of development. Moreover, quicker build time enables the addition of new features effectively as well as speedily.
Swift fares better than Dart in regards to native iOS app development and hence, is preferred for building iOS-only applications.
Inference: Swift outshines Dart when it comes to build time!
App Reloading Abilities
When there is a need to append new features to an iOS application, developers have to reload and then conduct testing on a device or a simulator. During this phase of iOS app development, the developer assesses the code and evaluates how the app is affected by the modifications introduced.
Dart uses the hot reloading approach and so the modifications made to the app are instantly displayed and can be viewed pretty fast, in just two or three seconds. However, with Swift as the programming language, the reloading process takes longer. Here, when the changes made are reflected in the app while the app is running on a test framework, simulator, or device, Swift developers need to alter a feature. Like the renaming of button and then the native code is upgraded for testing. And, this process approximately takes 12 seconds.
Nevertheless, these days, the Swift UI enables hot reloads and one can also use non-native solutions like InjectionIII to append novel features speedily.
Inference: Swift outshines Dart when it comes to build time!
Testing Approaches
Despite following different testing approaches, both Dart and Swift offer robust and effective testing modules. The testing environment offered by Dart allows developers to execute various kinds of tests including UI tests and functional-level tests. Developers can create tests that are to be executed by the Dart driver.
Swift eases out conducting tests during iOS app development owing to the availability of its testing platform XCTest. Using the Swift testing environment, one can test myriad components and aspects including UI modules, execution, incorporation, performance, integration, and navigation.
Inference: Swift outshines Dart!
Development Time and Expenses
The time taken for architecting apps are of great significance to the development team as well as the clients. A lengthy iOS app development process means more expenses and efforts. While Dart and Swift employ XCode for determining the development process, Swift apps overshadow Dart apps in this area.
Coming to the development cost, both Swift and Dart being open-source programming languages, do not incur additional expenses.
Inference: If you intend to create an iOS app only, Swift is preferable whereas Dart is recommended if you develop an app for Android as well as iOS.
Community Back-up and Popularity
The central Swift community, Swift.org boasts of 902 contributors on GitHub, enjoys 57.5k GitHub stars and 9.2k forks, and has 303463+ questions concerning Swift on the popular online portal Stack Overflow.
Dart has only 36 GitHub contributors, 1.5k stars and 117 forks, and 58480+ questions on the Stack Overflow platform.
Inference: Swift is more popular than Dart!

Both Swift and Dart are incredible programming languages and cater to specific iOS development needs. Swift is recommended for native iOS mobile app development projects, while Dart is more suitable for projects that include developing apps for Android as well as iOS platforms.
If you need assistance with iOS app development, contact Biz4Solutions, a Swift app development company that has helped numerous clients around the globe to craft unparalleled apps.