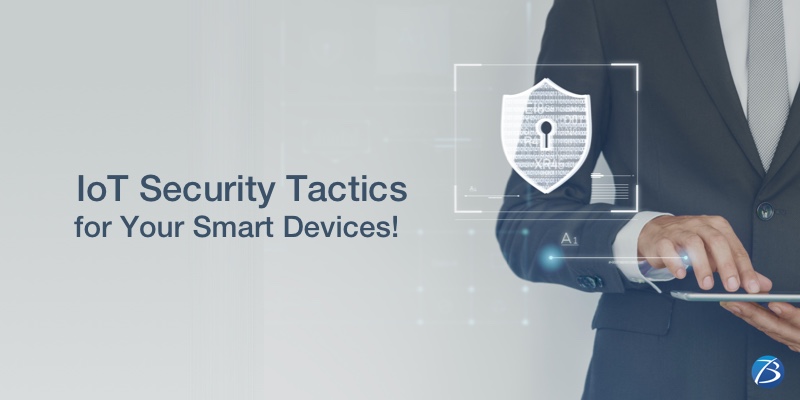 Security vulnerabilities can cause massive disasters. To cite an example, let’s consider a case study of the Stuxnet worm that was first detected in the year 2010. However, this malicious computer worm had made its first attack in the year 2006, and later in the year 2009, it was executed for a huge operation. In 2009, this worm was used like a cyber-weapon for targeting several data acquisition and control systems and destructing the machinery in nuclear systems. This IoT attack proved enormously catastrophic.
Here are a few more scenarios where cyber-criminals can attempt and have attempted in the past, to enter IoT systems through innocuous devices:
These types of attacks can severely damage the entire IoT ecosystem. So, how to prevent the IoT systems from such cyber-attacks? Are there any robust security measures or IoT securities for this? Well, in this blog, we are going to shed light on those measures.
But before we commence, let us take a quick look at the vulnerabilities that can put IoT systems at risk.

Security Vulnerabilities that Put the IoT Systems at Risk 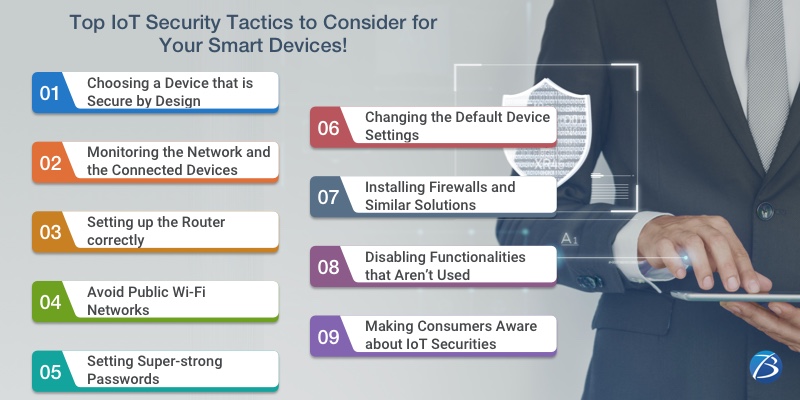 Choosing a Device that is Secure by Design
Make sure that the IoT device you buy is secure by design. Look into the design details of the device prior to its purchase. If adequate design details are not available for any device, then rethink buying the device. Also, ensure that the device manufacturer will be providing timely updates and patches for the lifetime of the device. It will also help the device to remain updated with the latest trends in the market.
Monitoring the Network and the Connected Devices
The IoT devices become vulnerable to threats, the moment they are connected to the internet. It is essential to keep track of all the devices and the network, but this becomes a tough job when more and more devices are connected to it. However, to ensure the security of the IoT systems, one must keep a record of the devices, network, and also the type of data these devices can access. Furthermore, if the system consists of IoT mobile apps featuring social sharing, make sure that the permissions are granted cautiously.
Setting up the Router correctly
Your Wi-Fi router can act as a gateway for cybercriminals to enter your IoT network of devices. After all, the router connects the IoT devices with each other to create a robust IoT network. So, securing the IoT system starts with securing the router and setting it up correctly. Here are some tips that companies can follow:

Always change the default name of the router because the default name is usually its make and model number. If the hackers get to know these details, they can easily get to know the default login and password and access your IoT network through the router. So, it is essential to change the router name and set a strong name that does not contain any personal identifiers like your name, address, etc.
Besides the router name, it is essential to change the password of the router to something strong and unique. Create complex passwords using numbers, letters, and special characters. For this, you can use a random password generator and generate a password that is inaccessible.
Finally, make sure that your router has a strong encryption method. Do not utilize some network that does not have a reliable encryption protocol or a public network. It is advisable to utilize the latest encryption standards like WPA2 (WPA3 is coming soon to the market) and not the older standards like WEP or WPA.

Avoid Public Wi-Fi Networks and Make Use of Guest Networks
While accessing the IoT network through your smartphone or laptop, always avoid using public Wi-Fi because hackers can easily break into such open networks. Such networks are usually offered in malls, hotels, coffee shops, etc. So, always use a strong and secure Virtual Private Network (VPN) because it provides you an encrypted, private gateway to the internet and halts the hackers from being able to catch your communications.
Moreover, it is a great idea to start using guest networks. This will not provide them access to the main network. As a result, if hackers try to play with one of the IoT devices on the network, they won’t be able to access or control your primary network and will be stuck in the guest network itself.
Setting Super-strong Passwords
Besides the Wi-Fi passwords, there are some other areas too, where you need to set super-strong passwords. For example, when an IoT device asks to create an account and sign-up using a password, make sure you use a strong and unique password that cannot be guessed easily. So, even if one of the devices gets hacked or compromised, other devices on the network remain intact.
But one major headache, in this case, is remembering a lot many passwords for different devices. So, one can utilize a password management tool that stores unlimited passwords, creates new passwords, and also syncs them between different devices.
Changing the Default Device Settings
Most of the IoT devices have some default settings, which are not secure and could cause vulnerabilities. Besides, there are a few devices that do not allow changing these settings and are a threat to the entire IoT network. But wherever possible, one must check and modify the weak credentials, obstructive permissions, intrusive features, open ports, etc.
Installing Firewalls and Similar Solutions
Security gateways can stand as a threat between your IoT network and devices. These possess more memory, processing power, and other functional capabilities than IoT devices.
So, to prevent hackers from playing with your IoT devices and systems, it is advisable to install powerful security solutions like a firewall. It blocks unauthorized traffic over the wire and runs IPS or IDS, which is intrusion prevention or intrusion detection system for scrutinizing the network system. Besides, a firewall comes with features like malware protection, SSL/SSH interception, content filtering, QoS management, etc. which increase the device security to a great extent.
Furthermore, one can also utilize vulnerability scanners for unveiling the security loopholes within the system. You may also make use of a port scanner for identifying the open ports.
Disabling Functionalities that Aren’t Used or Useful
There are several features available in IoT devices that are not used at all. For example, smart speakers have Bluetooth connectivity features and Wi-Fi, too. But mostly, the Bluetooth connectivity feature is not used. So, it should be disabled.
Another example of this is the voice control feature of smart TVs. These days, digital assistants like Alexa, Siri, Google Assistant, etc. are used and so, the voice control feature of the smart TVs goes unused. So, it is a better idea to turn that feature off. Likewise, several IoT devices have the feature of controlling them from any corner of the world. But, for your smart home, if you are making use of only the Wi-Fi connection in your home, disabling the remote access would be a wise option.
Such entry points that are not used at all must be disabled to protect the devices from being exposed to cybercriminals.
Boosting Consumer Awareness about IoT Securities
Most of the end-users are not aware of the security considerations of the IoT devices and tend to overlook them. So, increasing their awareness is a necessity today. They must be aware of the latest security measures for IoT-related systems. They must also be aware of updating the software apps, default credentials, etc. They must also be aware of dangerous cyber threats that take place and what can be the potential measures.
A Few Other Security Tips

Hackers and cybercriminals can enter the IoT network of various devices through a very harmless device on the network as these devices usually have no or little built-in security. It could be a smart TV, or a gaming console, or a smart lock. Once entered into the systems, these hackers can induce viruses that can easily access sensitive information like daily routines, contact details, financial information, passwords, etc., and misuse it.
Also, the hackers can install malicious software programs like malware causing all the more damage to IoT app solutions and IoT ecosystems altogether. However, if you proactively employ the security best practices during IoT app development or while setting up IoT systems, mentioned in this blog, your IoT systems will become highly secure and they won’t get hacked so easily.
Hope you are now well-equipped with the security best practices that you must employ for protecting your IoT devices and systems.
For any queries related to this, kindly comment below or reach out to us. We have expert IoT professionals who will not only resolve your queries but also help you design customized robust software solutions for IoT systems. We deliver futuristic offshore software services in India in several trending technologies. So, get in touch with us now for further details.