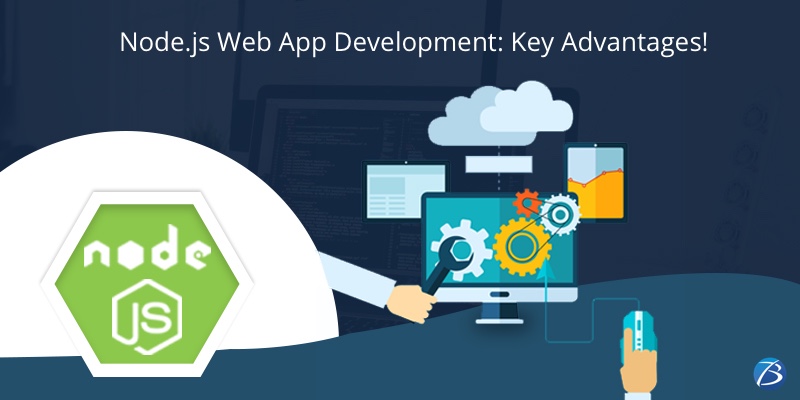 In the year 2009, Ryan Dahl, an American software engineer, created Node.js. The open-source project of Node.js was sponsored by a cloud computing and hosting company named Joyent. It was instantly recognized to be the most exciting technology then and gathered quite a lot of attention in 2017. Since then, its demand has kept multiplying. Later, this thriving technology was being used by LinkedIn for its backend development and even adopted by a host of Tech Leaders like Walmart, Uber, eBay, Netflix, etc.
In this blog, you will get a glimpse of what is Node.js along with its generic and technical advantages. So, let’s get started.

Node.js is an open-source, event-driven JavaScript runtime environment that does not execute the code on the browser, but rather outside it. It is a cross-platform framework that helps developers to use it for server-side scripting and also for writing command-line tools. Thus during web application development, server and client-side scripts can be written using a single JavaScript language. Its package ecosystem is admired to be one of the largest open-source libraries worldwide and is indisputably popular. It uses the V8 JavaScript engine of Chrome for code execution. It is used for architecting scalable server-side and networking apps. It enables event-driven programming for the faster development of apps.
Node.js is primarily being used for web app development and to build networking programs like web servers. The creation of web apps is extremely easy, and efficient yet cost-effective with this amazing technology. Nodejs web app development is extensively being chosen for real-time apps, and data-intensive apps requiring scalability and speed of operation. 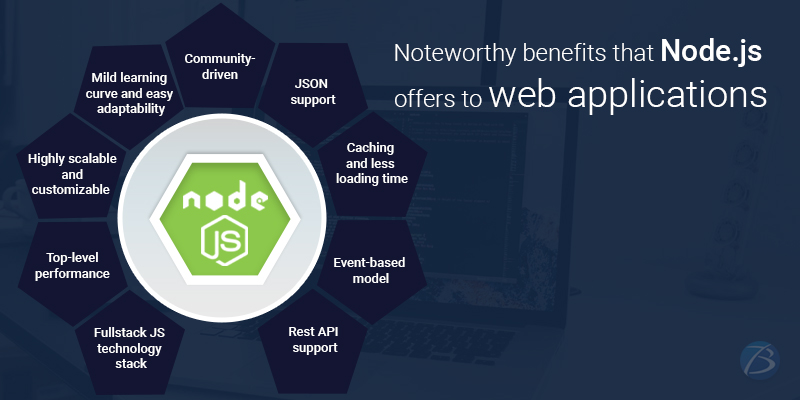 Fullstack JS Technology Stack
Node.js is a powerful name in the industry with over 368,985,988 downloads and about 750 new contributors, according to the Node-by-numbers report in 2018. It has 836,000 libraries in its rich ecosystem and almost 1000 new libraries are added to it every week. While using this technology, the Node.js developers can leverage the robust features of full-stack JavaScript development like:
Top-level Performance
The apps built using Node.js offer high performance for several reasons as mentioned below:
Highly Scalable and Customizable
Node.js is considered a viable solution for the scalability of the apps. It offers high scalability in horizontal as well as vertical directions. To scale the apps horizontally, extra nodes can be added to the existing system. To scale the apps vertically, additional resources can be added to the single nodes. Likewise,
Also, Node.js is known for providing customizable solutions. Rapidly growing enterprises that are willing to explore diverse dimensions can leverage this technology with ease. This is so due to the built-in API that can be leveraged for developing DNS and HTTP servers and JSON that simplifies the data exchange between web and client servers.
Mild Learning Curve and Easy Adaptability
Node.js is nothing but JavaScript. Since JavaScript is popular amongst the developer’s community, learning and adopting Node.js both in frontend development and backend development is much easier. Learning other Node.js use-cases is easier for beginners too. Writing code in Node.js takes lesser time.
Community-driven
This is an ever-evolving technology backed up by the active support of millions of expert developers and JavaScript programmers across the globe. You will find a large number of ready-made and simple solutions, codes, libraries, registries, modules, etc. on GitHub. Consequently, any issues can be resolved easily with the help of this vibrant community.
On the other hand, IBM supports this technology and has shown extra interest in sponsoring the project for making it a full-fledged ecosystem. Other Tech Giants like Google, Facebook, Amazon, etc. also have extended their support by making crucial contributions to it.
Other Technical Advantages
Caching Advantage and Less Loading Time: It supports quick caching of modules which reduces re-execution of code and task workload of the Node.js developers. It helps the end-users to access the web pages within a fraction of microseconds reducing the wait times.
JSON Support: Node.js can use JSON format seamlessly without converting it into binary models. This makes it a lightweight and extensible environment as compared to other frameworks.
Event-based Model: It is an event-based model having a non-blocking, asynchronous, and single-threaded nature. This helps make apps having real-time and event-based features like online gaming, video conferences, chatting functionality, etc.
Unit Testing: Node.js supports unit testing out of the box i.e. testing individual components in isolation. It allows using any JavaScript unit testing frameworks like Jasmin for testing the Node.js code.
REST API Support: Building RESTful API is possible with the use of Node.js.

We have looked at the crucial advantages offered by Node.js. Every web application development company and developer can leverage it with ease. This technology has some demerits as well, like instability in API, immaturity of tooling, heavy computing tasks, call-back hell issues, lack of experienced professionals, etc. But its advantages outsmart its pitfalls. However, countless business enterprises have welcomed web app development for their projects in Node.js. For any assistance regarding Nodejs web app Development, reach out to Biz4Solutions, a highly experienced offshore software Development Company offering high-end Node js app development services.
With this, we come to the end of this blog.
Hope this blog has enlightened you about this amazing technology! If you have any other advantages to let us know, please share your thoughts in the comment section.
You may even mail us at sales.enquiry@biz4solutions.com