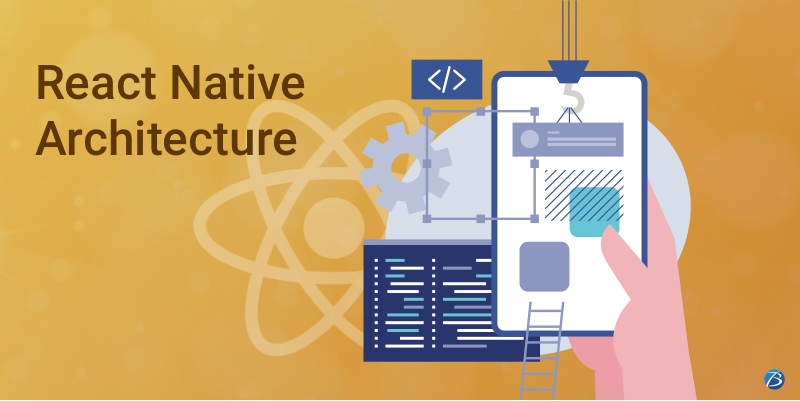 React Native, ‘the minimalistic JavaScript framework’, was actually discovered as a side-project while working on ‘React.js’- Facebook’s another important project. The principal motive behind React Native’s discovery was to find a comprehensive solution for creating cross-platform applications with native properties.
But surprisingly, this framework became way more popular than anyone thought, despite having some flaws. To make it more powerful, it was strongly backed by the huge open-source community of Facebook. Also, in the year 2018, the Facebook team announced the re-architecture of this framework for addressing all the existing issues faced by engineers during React Native development. Today, React Native has become one of the most preferred choices of developers for creating modern-day SPAs and mobile apps.
React Native is still progressing and a host of React Native development companies have emerged across the globe, due to a massive demand for this framework.
So what’s new in React Native in 2020? Well, the framework is about to release its new architecture in the market. In this article, we will have a glimpse at React Native’s enhancements in 2019, the basic React Native architecture, and its new update in 2020. 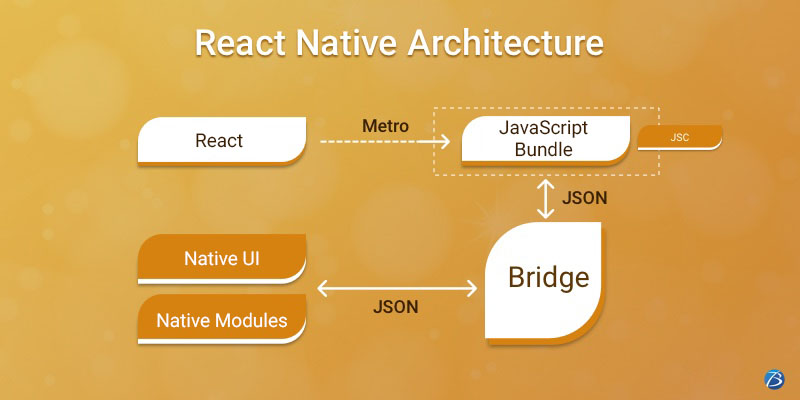 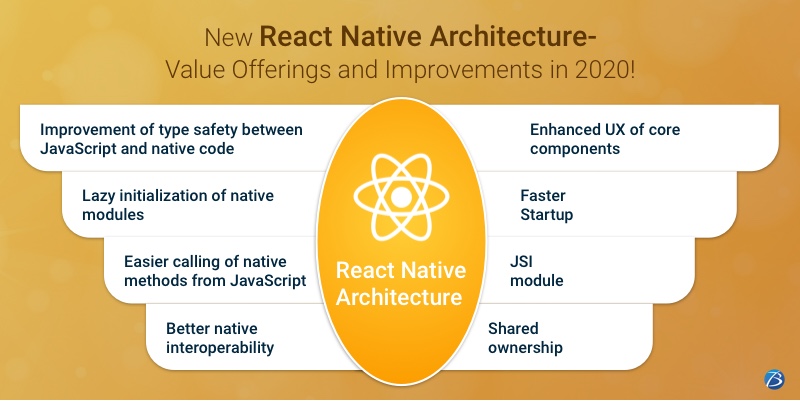 To address some of the existing issues related to the bridge in React Native, Facebook has taken the important step of going for a revamp in the architecture of this framework. There will be enhancements done in the Native Modules. For instance, a Type-safety feature would be introduced for improved safety between JavaScript and Native-side code. There will be default lazy initialization of Native Modules for faster startup. Also, when calling native methods from JavaScript, there will be less overhead. It will be possible to control the Native Modules directly. Communication between different threads will improve considerably.
Also, there will be the implementation of a new thread-safe of the React Native UI layer. It will help in better native interoperability, faster startup, elevated UX of core components, etc.
Another update will focus on a new set of APIs for the initialization of React Native. It will be dependent on the new native module system and the new renderer. The overall aim is the improvement of the startup time.
JavaScript Interface- JSI will be another important update that will be useful during native development. For this, the Bridge feature will be deprecated gradually. JSI act as an enabler for TurboModules and Fabric. Now, the JS bundle can make use of any JavaScript engine and is not limited to just JSC. The JSC engine can be replaced with a JS engine like V8 for instance.
JSI helps in the following:
Also, JS can now hold the reference to C++ Host Objects and call methods on them with the use of JSI. This will ensure that the Native and JavaScript realms will be aware of each other. So we can say that complete interoperability will be possible between all threads. Also, React Native developers will now be able to handle very large panels of systems.
A concept of shared ownership is being introduced in this new architecture which allows the JS code to directly communicate with the native code from the JS thread. So the serializing to JSON the messages won’t be required to pass across and all the asynchronous issues, congestion, etc. on the bridge would be removed.
This architecture also allows better control over native modules as developers can use native modules when the need arises instead of loading all of them at the startup. Consequently, there is a huge performance improvement during startup.

Since its inception, React Native has accumulated several features and functionalities that have become redundant today. So, to match the needs of next-gen apps, and other software products, the framework is cleaning away the unnecessary and outdated sections. This new architecture is an attempt to make the React Native development services highly efficient to create performant apps. Some features have even been replaced by their advanced counterparts. The core modules like AsyncStorage and Webview have been gradually removed and changed into the community managed repositories.
Besides this update, the React Native developer tools will make the development process much easier and impactful. All this is going to help the React Native developers a big time in improving the overall work-flow, time-frames, development process, predictability, reliability, and much more.
The re-architecture of React Native is expected to get completed in the coming few years and the future of this technology definitely looks bright.
We hope this blog provided you with some useful insights.
Do share your thoughts on this in the comments section.
We would love to hear from you.