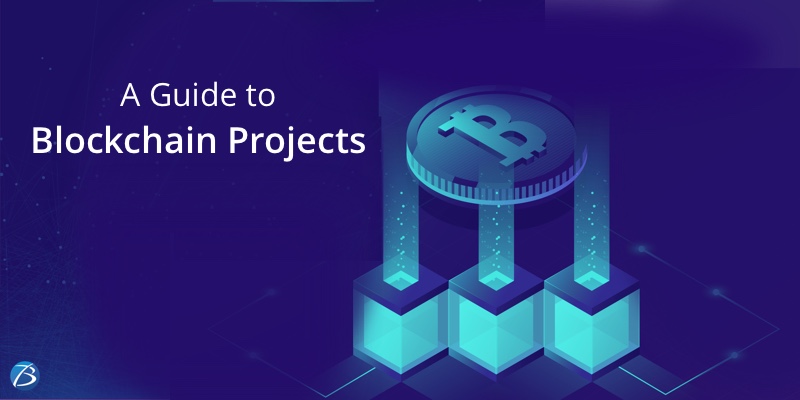 The term- ‘Blockchain’ was first coined in 2008 by Satoshi Nakamoto- an individual, or a group of people- its identity is not known till date. Blockchain was actually invented for serving as the public transaction ledger for Bitcoin cryptocurrency. But today, Blockchain solutions are solving several complex challenges for multiple industries. Blockchain Projects range from improving capital markets to data sharing/securing to seamlessly performing international payments. In this blog, I will discuss with you different types of Blockchain projects existing in the decentralized economy, along with a few basics of Blockchain technology and some vital benefits of Blockchain app development. Let’s get started.

Simply put, Blockchain refers to the technology in which chains of blocks are created for carrying important data securely. This technology enables to timestamp digital documents so that altering or backdating them isn’t possible. Also, it helps the Blockchain app developers resolve the double records problem without requiring a central server.
This technology is also called Distributed Ledger Technology (DLT). It uses decentralization and cryptographic hashing. It is based on three concepts: Blocks, Nodes, and Miners. Conceptual working of Blockchain is explained in the below steps:

The forward-thinking solutions provided by Blockchain app development will be virtually impacting almost all the sectors within a few years. This underlying technology is here to stay for decades to come as it offers advantages like the below:
With the increasing demand for Blockchain technology, businesses are trying to adopt it in various forms. Different types of blockchain projects are coming up to keep abreast with the trending technology. 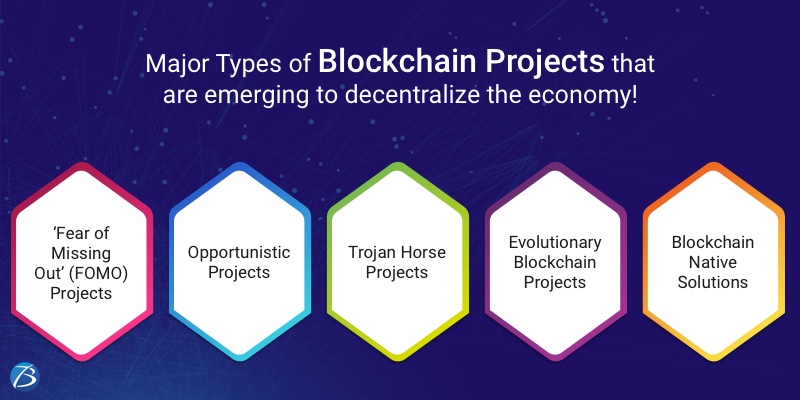 ‘Fear of Missing Out’ (FOMO) Projects
The FOMO projects, as their names depict, are the ones initiated by companies to be seen as a competitive organization following the current trends and does not fall behind in the business world. These Blockchain Projects are usually led by single companies, either used for in-house applications or with a few limited partners. They are mostly used as a marketing act. These companies do not have the adept knowledge on how Blockchain can be best employed for varying projects. Though they might not create much value but they are not always useless. They represent the companies as modern and futuristic, so the chance of getting prospective customers increases.
However, the companies going with such projects must be aware of ‘FOMO backlash.’ It means that if the project is poorly planned and fails in the long term, the company’s reputation can be at stake.
Opportunistic Projects
These kinds of projects are usually meant to solve issues related to record-keeping or any known problems. These projects provide long-term benefits to the companies even when they are not operating for some time. But looking at the downside of these projects, the companies may lose control over contracts and data later.
One of the examples related to Opportunistic Projects is the creation of the Australian Securities Exchange for streamlining financial trading. Another example is the project developed by the Depository Trust and Clearing Corporation (DTCC) for regulating records from credit-default swaps is for the US financial system.
Trojan Horse Projects
In this category of projects, one significant player like a dominant supply-chain participant, or a small group, or a digital giant builds a Blockchain project and invites other ecosystem participants for employing it. They come with a strong technological foundation and are meant to address the common and wide-reaching issues in a certain industry. These projects look quite attractive and are backed by a brand. But such projects may require the users to share their sensitive info, their company’s data, etc., and thus, transfer the control which may result in consolidation of the market for the main owner of Blockchain.
A food-tracking Blockchain system is a good example of a Trojan Horse project. It takes lesser time and effort comparatively to decide the point at which the food items were replaced/adulterated, the person responsible for this, and its further prevention. It allows accessing of the records to the users in real-time. But the requirement is that participants need to share their personal details on the network. This can be at times risky for the participants as they become dependent on owner’s technology and bound by their contract terms.
Evolutionary Blockchain Projects
Blockchain projects in this archetype are developed in order to evolve over time so as to utilize tokens with decentralized governance. As compared to the trojan horse project category, the business currencies in evolutionary type projects can trade at a lower risk level comparatively for the participants.
There is an example for these type of projects that comes from UEFA – the central committee for European football. This committee works with two Swiss technology companies namely- TIXnGO and SecuTix for the development of an evolutionary blockchain platform that provides a safer and equitable market for selling football tickets. In this project, token is created for each ticket so that all the purchases, transfers of each ticket can be tracked along with owner details.
Blockchain Native Solutions
This too is another kind of project that business leaders focus upon. They are a preferred choice of several start-ups or innovated even by teams of existing firms for disrupting an existing business model or for developing new market opportunities. They may start with some different facilities and perspectives, but eventually, they are expected to move in the direction of decentralized governance and tokenization. However, these solutions come with huge currency risks. As a result, businesses that are ready to experiment and manage their own data, prefer Blockchain Native Solutions.
The gaming and Education industries have been working upon such projects. Enjin is an example of this project type in the gaming sector. In the education sector, Woolf University, also known as ‘decentralized Airbnb for degree courses’, is the best-cited example.

Blockchain technology has emerged as a new-age solution to address numerous business challenges that include data sharing and workflows. Blockchain solutions are not just limited to cryptocurrency today. They are applicable to several industries like the healthcare industry for sharing the data securely, in the transportation industry for real-time operations, in real estate processing, in the voting mechanism, for cross-border payments, for tax regulation and compliance, for food safety, and much more. So if you are thinking of building an impactful software application using Blockchain app development services, this blog would prove to be useful.
This is it for now. I hope this read was insightful.
What are your views on this technology? Which type of Blockchain project have you worked upon?
Do share with us in the comments section below.