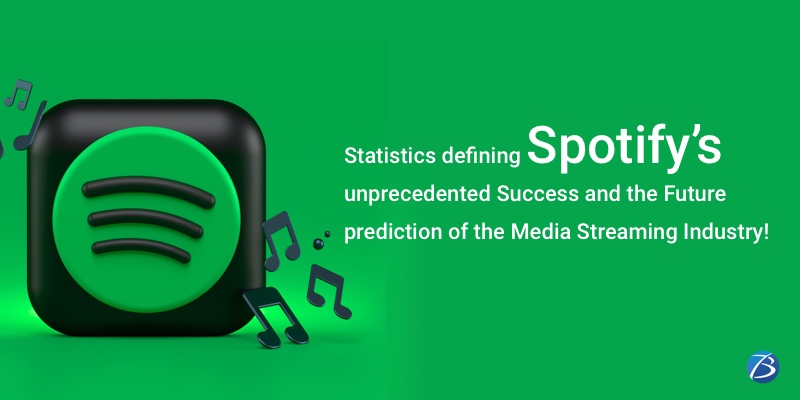 Online media streaming platforms had started to gain recognition amongst users in the past decade. This trend was further intensified ever since the rise of the stay-at-home economy induced by the Covid19 pandemic. And, this trend is here to stay! In this post, we will discuss some important facts and stats revolving around Spotify, one of the most trending platforms of modern times that indicate the bright future of media streaming apps.
Spotify is the popular international music streaming platform that enables one to listen to, access as well as download millions of songs on all kinds of devices. Its prime objective is to provide universally accessible content and prevent individuals from downloading music illegally. Let’s peek through the unique offerings, success stories, and interesting facts about the journey of the Spotify app! A quick read will be immensely beneficial to entrepreneurs planning to invest in on-demand media streaming app development.

Spotify is a Sweden-based provider offering media/audio streaming services. It boasts of having more than 381 million active users per month. The users of this leading music streaming platform enjoy instant access to its humongous library comprising of podcasts and music; and can listen to any piece of music as per their liking, at any time. What’s more?

Spotify offers an ad-included free version as well as a premium version.
Free Version
The freemium service comes with basic features and limited user control. Free users can access the content by signing up through an email ID or simply by connecting with Facebook. In this case, the Spotify app’s monetization strategies include audio advertising, the selling of video, display, playing ads while media streaming, etc.
Premium Model
The paid version is quite reasonable and offers extra features like top-quality tracks, offline listening, ad-free streaming, and many more. The Premium plan is further categorized into three different plans based on the needs of diverse groups of the target audience.

The concept of Spotify was coined by Martin Lorentzon and Daniel Ek in 2006. Back then, Spotify was available across 6 European countries, and by 2011, it had reached the American market.
In February 2009, it opened public registration in the UK, for its free service tier. With the launch of Spotify’s mobile service, registrations sky-rocketed and this led to a temporary hold on its free service – an invitation-only policy was adopted.
While its US launch in 2011, the policy changed. A free trial was offered to users for six months and during this period users were entitled to listen to ad-included unlimited streaming. After the expiry of this free trial period, users were limited to listening to ten hours of streaming per month and five replays for each song. These limitations applicable for the free version were later dropped.

One of the most significant USPs of Spotify: AI and ML integration

The integration of avant-garde technologies like machine learning and artificial intelligence is one of the most significant USPs of Spotify. This is because the collected data greatly influences Spotify’s decision-making process. The gathered information navigates algorithms and plays a crucial role in improving the UX.
For this reason, Spotify is able to recommend user tracks that users may not have heard before, but those tracks are based on the songs they have listened to earlier and are most likely to be interested in. Furthermore, ML improves user recommendations with time resulting in user retention and loyalty.

The Future of Media Streaming Apps

Today, popular media streaming apps have come a long way to deliver a blended approach comprising entertainment as well as wisdom and creativity that is highly intriguing and appealing to the audience.
Industry veterans have predicted that with the advent of high-speed internet via the 5G technology, media consumption is going to rise. Moreover, media streaming platforms will become more affordable in the coming days leading to more consumers.
Therefore, the media streaming apps and platforms have to keep their services updated to match the newest trends and fulfill the needs of modern-day consumers, specifically their desire for customized content.