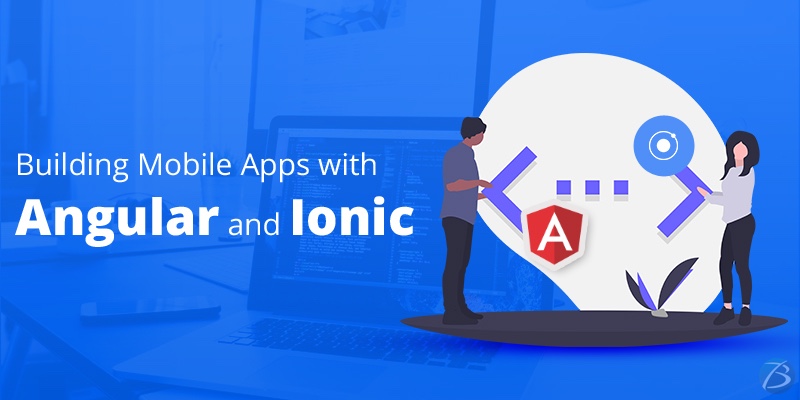 Angular development has become one of the best approaches for designing highly intuitive applications and when clubbed with a finely-tuned Ionic framework, the combination becomes all the more powerful and leads to the creation of beautifully designed user-centric hybrid mobile apps. This combination has already being used for countless projects worldwide. Consequently, Ionic and Angular JS app development services are highly being preferred by diverse industrial domains for various applications.
So please read the following post to know more about these vibrant technologies and the benefits that their combination offers.

Angular is an open-source framework maintained by Google. It is a client-side development framework and was developed by Misko Hevery, an engineer at Brat Tech LLC in 2009. The Angular framework was launched in 2012; the first version being AngularJS. This framework comes with a host of tools and libraries that enable the Angular app developers to easily create robust feature-rich apps for diverse client needs. Additionally, it helps in developing and testing the virtual platforms; and as a result, can be utilized for Enterprise apps. Some of the top features of this framework are:

Ionic is an open-source software development kit (SDK) that ensures faster and cost-effective app development of mobile apps, desktop apps, PWAs, etc. with the utilization of technologies like HTML5, CSS, SASS, etc. It was created on top of AngularJS in the year 2013 by Max Lynch, Adam Bradley, and Ben Sperry of Drifty Co. Thereafter, it has added the support for React and Angular; the support for Vue is still under development.
Ionic app development mainly focuses on the front-end. It is an innovative SDK that enables the development of top-grade personal and commercial apps. The development of Ionic apps is easier since the Ionic framework is simpler to learn and implement. Moreover, the Ionic App Developers enjoy working with this framework. The key features of Ionic’s are given below: 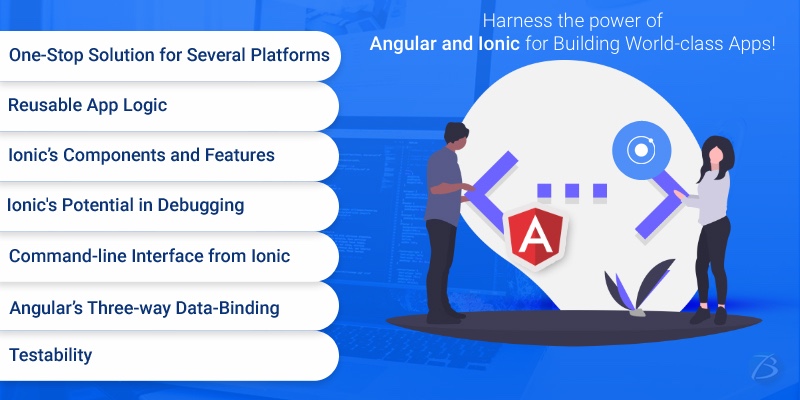 Earlier, the developers needed to create separate codes for Android, Windows, iOS, etc. But AngularJS and Ionic changed this scenario allowing the development of multiple apps with a single codebase. Such apps can be easily downloaded from the app stores and can be run on any platform or device.

Fusing AngularJS and Ionic enables the developers to separate user interfaces, system logic, and data models. This means that the developers in parallel can reuse the logic and also customize the UI for different gadgets and different platforms like iOS, Android, Windows, etc. This reusability of the app logic has made the process less time-consuming and less expensive.

Ionic plays a significant role in app development due to its potential in debugging, performance-boosting qualities, and the ability to create attractive UI. The Ionic developers can take advantage of $ionicConfigProvider elaborate transition, style, or behavioral pattern. It creates the elements as per the device’s layout and also abides by the guidelines while utilizing the elements on diverse devices. Also, Ionic apps are built in a modular fashion, hence it is easy to update and maintain the app.
Another noteworthy feature of the Ionic is the Command-line interface i.e. CLI. It enables the development, implementation, and testing of any application on multiple platforms using a single command. This improves productivity and saves time for developers.

AngularJS framework is known for delivering robust performance and captivating front-end for the apps. On top of that, when it is clubbed with Ionic, it unlocks new possibilities for developing captivating apps. Ionic has attractive themes and the availability of several components that help in the creation of an outstanding UI. This ultimately elevates the user experience and also retains the end-users. Moreover, both frameworks make the development process quite easier and faster for developers and cost-effective for businesses. So, if you want to build apps using Ionic and AngularJS, connect with an Ionic app development company or an Angular app development company and share the ideas with them to build a cutting-edge app.
We hope this blog was useful to you!