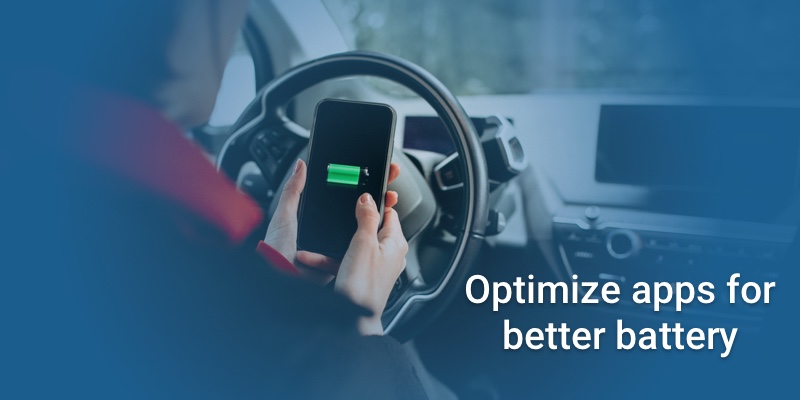 The battery life of a smartphone is one of the crucial aspects of the mobile user experience, isn’t it?
Users mostly tend to buy the smartphone that promises longer battery life. But despite choosing the best one in the market, phone batteries can drain out and underperform owing to numerous factors. Factors like fast internet connections, speedy processors, thinner phone bodies, brighter screens, etc. badly affect the devices’ battery. But, heavy and unoptimized mobile apps are one of the top reasons that lead to poor battery life. Even a popular app like Facebook is known for draining the battery of mobile phones.
However, there are some remedies that can be useful in resolving this common issue. In this article, we will shed light on those remedies and focus on how mobile app developers and app development companies can optimize mobile apps for better battery life. We will also take you through the downsides of not optimizing the mobile apps. So let’s quickly get started.

There are three important points to remember, as mentioned below: 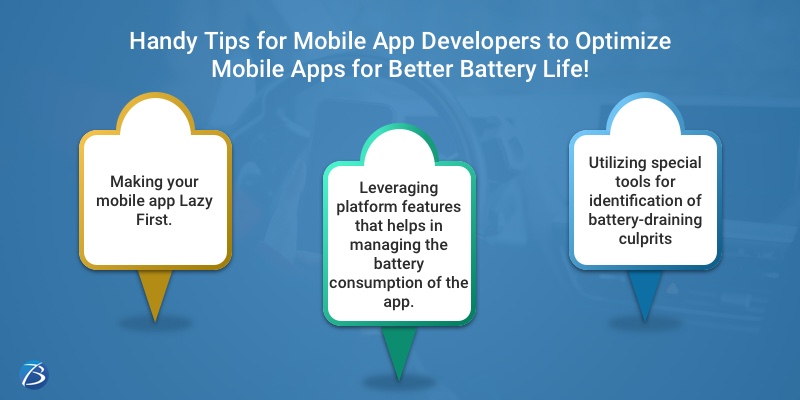 1.  Making your mobile app Lazy First.
Lazy First Design means finding ways for reducing and optimizing the battery-intensive processes. In this regard, there are some questions that come up and you need to consider answering them while using the CP, the screen, and the radio. Those questions are:
Cut-out Operations: Are there any redundant operations that the mobile application can do without? For instance, can it cache downloaded data rather than waking up the radio repeatedly for re-downloading the data?
Postpone: Are there any tasks that can be deferred by the app? For instance, to back-up the data up to the cloud, can the app wait until the mobile phone is charging?
Coalesce: Is it possible to batch the tasks rather than putting the device into an active state again and again?
So, these issues can be resolved by leveraging some features on the Android platform. Let’s have a look.
2.   Leveraging platform features that helps in managing the battery consumption of the app.
For managing the battery consumption in mobile apps, the Android platform provides various APIs that can be implemented in the apps. Besides, some internal mechanisms are also available in the platform for conserving battery life. These mechanisms include- Doze and App Standby, App Standby Buckets, Background restrictions, Power management restrictions, Testing, and troubleshooting, etc.
Also, Android 9 has made various enhancements to the battery saver mode. Manufacturers of devices can determine the precise restrictions to be imposed. For example, the system applies the below-given restrictions on AOSP builds:
You may have a look at the device-specific power optimizations here.
3.  Utilizing special tools for identification of battery-draining culprits.
Mobile apps can be further optimized by making use of special platform tools. These tools help to identify specific areas of the app that consume more battery so that those areas can be worked upon for successful optimization of apps. For Android, these tools include Battery Historian, Profile GPU Rendering, etc. These can also be used to resolve the areas identified in the Lazy First design.

Modern-day smartphone users are very particular about adding apps to their phones. If they find that a certain app is draining their battery too much, they may choose to delete the app even though it is one of their favorite apps. So, every mobile app development company must consider this and optimize mobile apps for better battery life and thus, increase the chances of their app not being uninstalled. The aforesaid tips would be of great help in this case.
If you want to create a new-age mobile app and have an influential idea in your mind, discuss it with our team at Biz4Solutions! We will partner with you to architect an advanced mobile app with our robust mobile app development process.