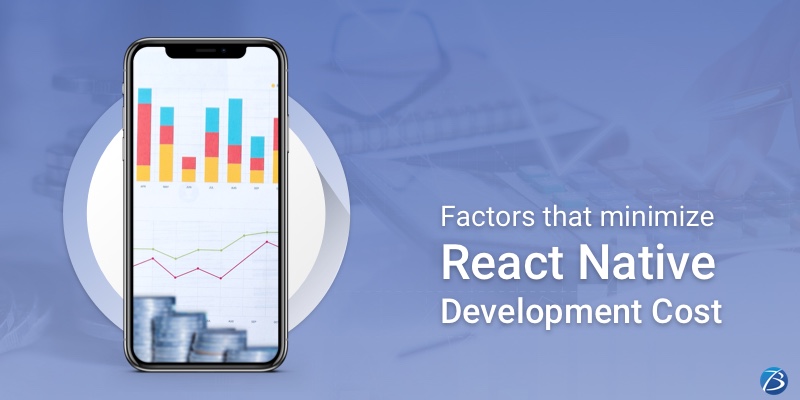 It is interesting to know that the well-known JavaScript framework- React Native, was discovered by Facebook’s team as a side-project, while they were working on developing React.js. The team wanted to find a comprehensive framework to create cross-platform apps with native-like functionalities and came up with React Native. Who knew that a side-project would gain such huge popularity one day?
Today, entrepreneurs, start-ups, and business ventures all across the globe highly prefer this framework. Besides, a plethora of React Native development services have surfaced in the last few years and are still emerging to cater to the ever-growing demand for React Native apps. Owing to the crucial benefits of React Native, like cost-efficiency and high-performance, this demand has surged exponentially.
This article is especially meant for all those willing to utilize this high-end framework for their upcoming mobile app development project. Here, we will talk about how your project can become budget-friendly. So, we have outlined the top factors that reduce the cost of developing React Native apps. We will also take a quick look at what factors spike the cost of the project. So let’s begin. 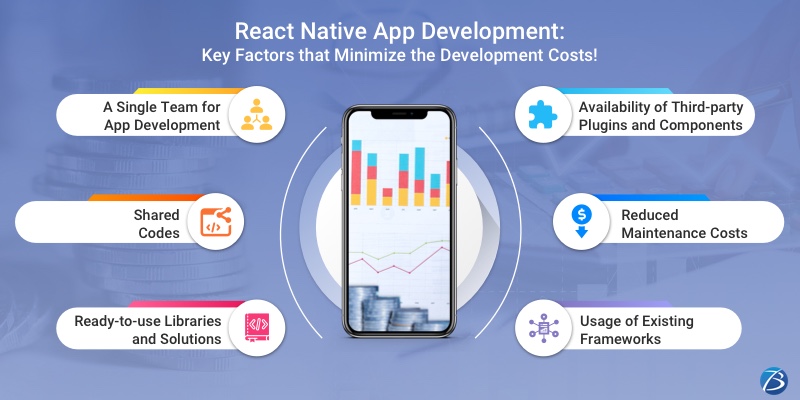 A Single Team for App Development

This factor is one of the biggest cost-saviors in the app development process. Rather than hiring two separate teams for both platforms- iOS and Android, a single team of React Native app developers can work on the project.

React Native mobile app developers can reuse the codebases across all the platforms and this saves the additional efforts as compared to Native development that requires separate coding for every platform.

Availability of Third-party Plugins and Components

Like every other framework, React Native framework, too, has some downsides. It lacks some plugins and components that are essential to make the apps impactful and top-class. But there are a plethora of third-party plugins available in React Native to add the desirable functionalities in both the platforms- Android and iOS. React Native app developers can easily utilize them or integrate them with the react-native module for quick, seamless, and feature-rich mobile apps.
Have a look at the Best UI Libraries and Components of React Native here.

In React Native apps, maintenance includes factors like bug-fixing, design changes, app updating, and many more services. Since one code is utilized for apps on different platforms, just a single app needs to be maintained. This eases out the maintenance efforts to a great extent and also reduces the maintenance costs.

Performance Optimization:
It is a tough job to ensure that React Native apps meet the standards like those of Native apps. So, optimizing performance to the level of Native apps requires the investment of additional costs.
UI Enhancements:
Using the React Native framework, it is possible to utilize the same codebase for both- Android and iOS platforms. This lowers the cost of development but can negatively affect the app’s performance. Also, the apps look similar on different platforms. So, to enhance its appearance and performance, additional UI enhancements need to be done; that adds to the budget.
Security Concerns:
The security offered by Native apps is much robust. Comparatively, React Native apps are less secure and can be prone to hacking or similar security breaches. As a result, they need extra costs to get top-grade security.
Team and Learning Curve:
React Native comes with a steep learning curve. So, in case you have a team of Native developers, you will need extra time to train them in React Native; which in turn will lead to more costs.

The cost of developing a React Native app depends on a host of factors as seen in this article. If you do not take into consideration these factors that reduce the developmental costs, mobile app development can cost you a fortune. But you also need to remember that in the desire to cut down the cost, you should not compromise on the quality of the React Native application. If the quality gets hampered, then your project may fail.
If you want further assistance on how you can bring down the cost of your project, get in touch with Biz4Solutions, an acclaimed React Native application development company in the USA.
Also, was this article beneficial?
Are there any other factors that you want to share with us?
Do comment below to let us know.