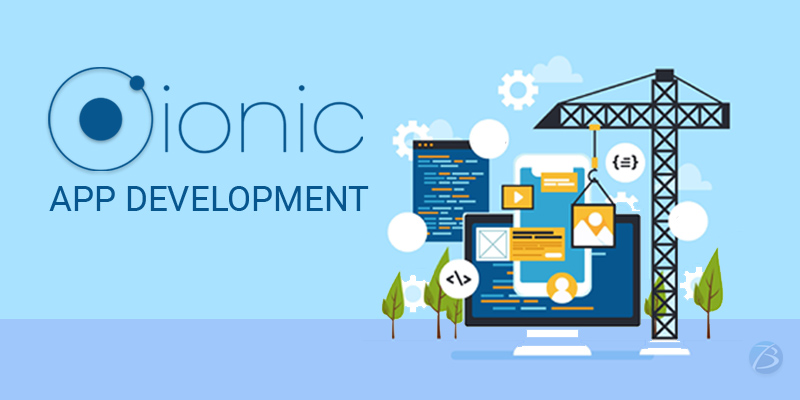 A progressive Web Application (PWA) is a disruptive innovation that has redefined the basic tenets of the web experience in smartphones. It is an ingenious blend of the best of both worlds – responsive websites and native mobile applications. Needless to say, PWAs are gaining momentum and are predicted to be the next big thing in the realm of mobile app development. Switching to PWAs turned out to be highly profitable for several biggies as users started to spend more time on PWAs. Take a look at some of the success stories of PWA adoption.
Flipkart experienced an increase of 40% in the re-engagement rate and 70% in the conversion rate!
Twitter succeeded in getting down the bounce rate by 20% and increasing the pages per session by 65%!
The click rate in “trivago” shot up by 97% and there was a 50% hike in the user engagement!
Hence, the rate of PWA adoption is rising and it has been observed that most businesses prefer to hire an Ionic app Development Company for executing their PWA development project. Business enterprises like Facebook, Tinder, BookMyShow, Starbucks, Forbes, Pinterest, and Uber have successfully expanded their customer base with the help of Ionic PWAs.
In this blog, I have penned down the reasons why Ionic is one of those frameworks that prove beneficial for PWA development. But before we dive deeper, let me enlighten you about Ionic and PWAs.

Ionic is an open-sourced SDK for creating Hybrid applications. It is built in JavaScript, CSS, and HTML5 and has AngularJS as its base. It not only possesses TypeScript extensions and Cordova plugins but also offers numerous native device features like Fingerprint Authorization, HealthKit, Bluetooth, etc. This enables the Ionic app developers to architect futuristic apps with ease.

A PWA is an application software that is delivered via the web and works like native apps. Introduced by Google in 2015,it has been built using JavaScript, CSS, and HTML, and designed to work for platforms using standard-compliant browsers. PWAs are easily accessible and discoverable like web apps, are convenient like mobile apps, are easy to install, affordable,and display unparalleled performance. A PWA installed in your device, utilizes the cached data from earlier interactions to function in an offline mode and thereby addresses problems like connectivity issues and lack of a stable connection.

The X Factor in Ionic that facilitates PWA development

Take a look at the top reasons to leverage Ionic development services for developing PWAs. 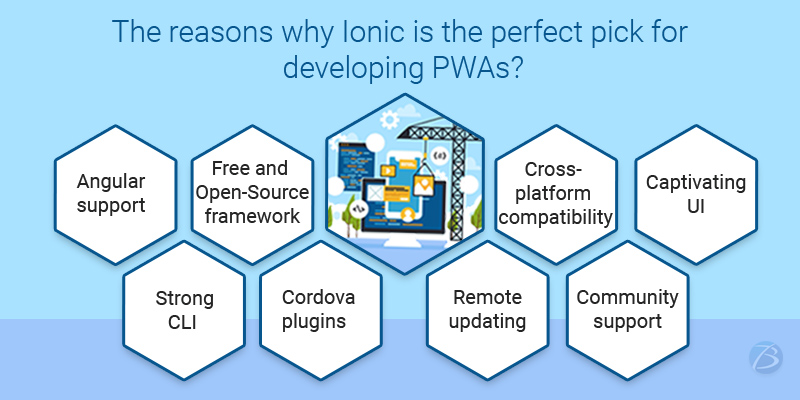 Ionic enjoys the support of Angular, which is known for its ability to develop exceedingly interactive mobile and web applications. Angular’s component API forms the foundation of the Ionic framework and AngularJS provides the sentence structure extensions of HTML to Ionic. These goodies help Ionic developers add amazing and user-friendly functionalities to the app.

A Free and Open-Source Framework

As Ionic is open-sourced, managing the code structure becomes super-easy, resulting in a faster, and budget-friendly development. Moreover, Ionic is authorized under the MIT license and is merged with mobile-optimized codes of JavaScript, CSS, and HTML5 components.

Ionic, being platform-independent leads to the creation of apps that run seamlessly on the major operating systems- Windows, iOS, and Android.When these applications are deployed via Apache Cordova with a single codebase, they automatically adapt themselves to the platform or device they are functioning in.

Ionic is an HTML5 framework and so requires a native wrapper to function like native apps. Cordova, a bunch of command-line tools, and the plugin bridge acts as a native wrapper and also enables easy access to native-like device features such as GPS, camera, etc.

Earlier, the developers followed the traditional approach of posting updates on the App Store and then left it to the client’s discretion whether they are going to update the app or not. However, things changed with the advent of Ionic empowered Hybrid apps. Since Hybrid apps function within a web view, developers can now remotely update the app at the web layer outside the app store, using smart tools such as PhoneGap ContentSync, Ionic Deploy,etc.

The Ionic community comprises of more than 5 million developers around the globe. Community Forum, World Wide Slack, Stack Overflow,and GitHub are some of the forums that answer developer queries and provide them the necessary guidance.

It’s time for some practical advice on getting started! Follow these steps.
Now, the Ionic app is ready for use. The next step is to add Service Worker and Web Manifest to convert Ionic into a Progressive Web App. Service workers are nothing but the scripts that provide offline functionality, caching features, synchronization in background, push notifications, etc. Web Manifest provides info in the JSON text file about the application.

Would like some useful tips on Ionic PWA development? Well then, this is for you!

The alternative frameworks for PWA development

Other than Ionic, Xamarin and React Native can also be used to develop PWAs. React Native development uses JavaScript and ReactJS, while C# and .Net are used for Xamarin.

This blog must have given you panoramic insights on Ionic PWA development and you must have realized why the big market players have opted for Ionic, despite the availability of other options. Ionic creates versatile PWAs with an outstanding UI and UX, using standard tools and a single codebase. Hence, Ionic PWAs enables enterprises to explore new horizons, cater to the demanding requirements of present-day customers, and at the same time ensure a cost-efficient development. Would like to architect Progressive Web Applications with the help of an Ionic Development Company? Reach us!
We hope this blog was enlightening! Please do share your thoughts in the comments section. For any other details, you may mail us at sales.enquiry@biz4solutions.com. 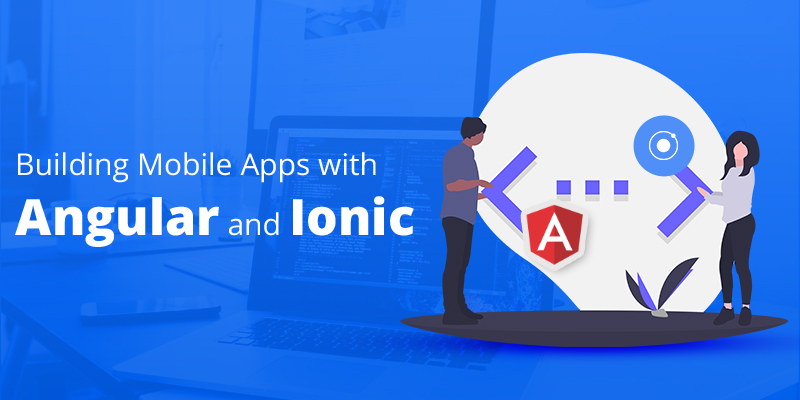 Angular development has become one of the best approaches for designing highly-intuitive applications and when clubbed with a finely-tuned Ionic framework, the combination becomes all the more powerful and leads to the creation of beautifully designed user-centric hybrid mobile apps. This combination has already being used for countless projects worldwide. Consequently, Ionic and Angular JS app development services are highly being preferred by diverse industrial domains for various applications.
So please read the below post to know more about these vibrant technologies and the benefits that their combination offers.

Angular is an open-source framework maintained by Google. It is a client-side development framework. It was developed by Misko Hevery, an engineer at Brat Tech LLC in 2009, and was released in the market in 2012; the first version being AngularJS. This framework comes with a host of tools and libraries for the AngularJS app developers to easily be able to create robust feature-rich apps for diverse client needs. Also, it helps to develop and test the virtual platforms; as a result, it can be utilized for Enterprise apps. Some of the top features of this framework are:

Ionic is an open-source software development kit (SDK) that ensures faster and cost-effective app development of mobile apps, desktop apps, PWAs, etc. with the utilization of technologies like HTML5, CSS, SASS, etc. It was developed on top of AngularJS in the year 2013 by Max Lynch, Adam Bradley, and Ben Sperry of Drifty Co. Today, it has also added the support for React and Angular, support for Vue is still under development.
Ionic app development mainly focuses on the front-end. It is an innovative SDK that enables the development of top-grade personal and commercial apps. The development of Ionic apps is easier since Ionic is easier to learn and implement and fun for the developers. Some of the Ionic’s features are given below: 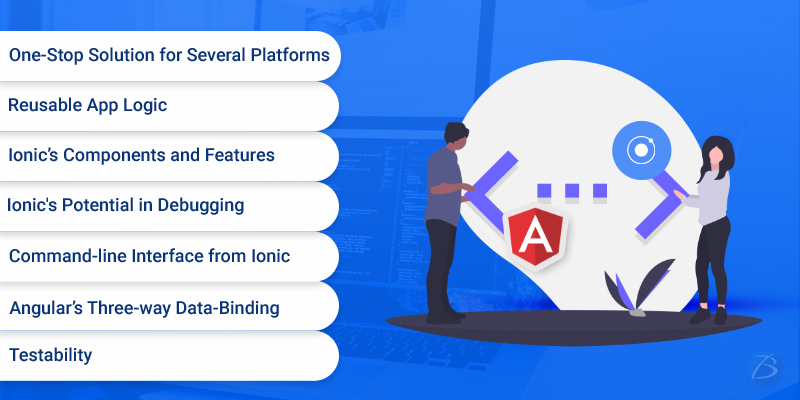 Long back, the developers needed to create separate codes for Android, Windows, iOS, etc. But AngularJS and Ionic changed this scenario and allow developing multiple apps with a single codebase. Such apps can be easily downloaded from the application stores and run on any platform or device.

Fusing AngularJS and Ionic enables the developers to separate user interfaces, system logic, and data models. This means that the developers can parallelly reuse the logic and also customize the UI for different gadgets and different platforms like iOS, Android, Windows, etc. This reusability of the app logic has made the process less time-consuming and less expensive.

Ionic plays a significant role in app development due to its potential in debugging, performance-boosting qualities, and the ability to create attractive UI. The Ionic developers can take advantage of $ionicConfigProvider elaborate transition, style, or behavioral pattern. It creates the elements as per the device’s layout and also abides by the guidelines while utilizing the elements on diverse devices. Also, Ionic apps are built in a modular fashion, hence it is easy to update and maintenance-free.
Another noteworthy feature of the Ionic is the Command-line interface i.e. CLI. It enables the development, implementation, and testing of any application on multiple platforms using a single command. This improves productivity and saves time for developers.

AngularJS framework is known for delivering robust performance and captivating front-end for the apps. On top of that, when it is clubbed with Ionic, it unlocks new possibilities for developing captivating apps. Ionic has attractive themes and availability of several components that help in the creation of an outstanding UI. This ultimately elevates the user experience and also retains the end-users. Moreover, both frameworks make the development process quite easier and faster for developers and cost-effective for businesses. So, if you want to build apps using Ionic and AngularJS, connect with an Ionic app development company or an AngularJS app development company and share the ideas with them to build a cutting edge app.
We hope this blog was useful to you!
You can mail us at sales.enquiry@biz4solutions.com for your requirements!
Page 2 of 2«12