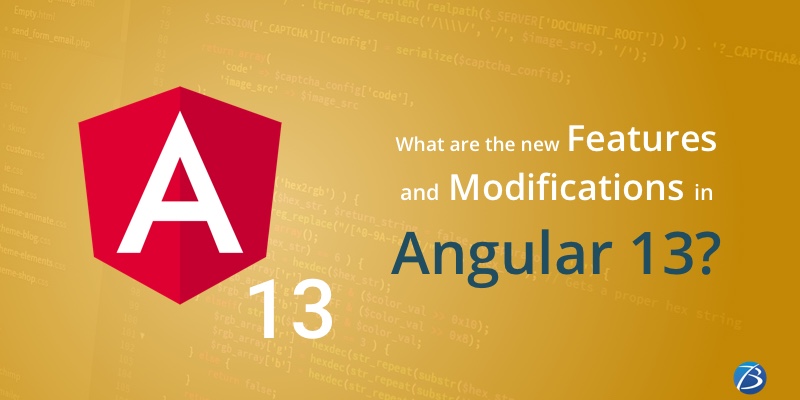 The dynamic team of the popular typescript-based web framework, Angular, has been known for its periodic updates to keep up with changing times and emerging technologies. And, here’s another update that has created a buzz in the technical world. Their latest update, Angular 13, rolled out on 3rd November 2021; is one of their most organized, pre-planned, and game-changing updates so far.
So, what’s new in angular13? Well, this post discusses all the noteworthy add-ons, embellishments, improvements, deletions as well as modifications. Let’s peek through the novel offerings of Angular 13! 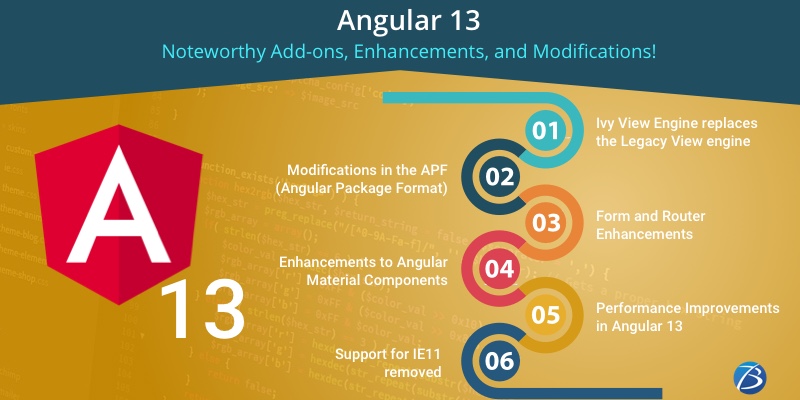 Ivy View Engine replaces the Legacy View engine
After the Angular team had rolled out multiple updated versions that marked a transitioning phase to the Ivy View Engine, Angular 13 is now 100% Ivy. Angular has completely removed support for the legacy view engine and supports only Ivy. The existing libraries will get migrated to the “partial” compilation mode automatically and the metadata that was earlier needed for the legacy View Engine will be removed. Angular developers should switch from “enableIvy:false” to “compilationMode:partial” to keep up with the update.
This update brings about speedier compilation as well as enhanced productivity to Angular app development. Moreover, the Ivy approach enables developers to write codes dynamically unlike the previous versions, wherein the developers needed a boilerplate for code creation. Using the previous versions, developers are required to inject ComponentFactoryResolver into the constructor for creating components. But, with V13, components can be created without having to create an associated factory using ViewContainerRef.createComponent.
Modifications in the APF (Angular Package Format)
The APF (Angular Package Format) defines the format and the structure of the packages contained within the Angular framework. This approach greatly helps in packaging third-party libraries in the web development environment. Angular 13 comes with a new version of the APF, a modernized and streamlined APF.
Modifications and add-ons
Form and Router Enhancements
V13 comes with FormControlStatus, a new type for forms which is a union type of all status strings possible concerning form controls. This add-on brings about two more modifications – the type of AbstractControlStatus changes to FormControlStatus and StatusChanges now has Observable
V13 introduces a host of new functions that manage form validation like addValidators, setValidators, hasValidators, removeValidators, alongside their equivalent async versions – addAsyncValidators, setAsyncValidators, hasAsyncValidators, and removeAsyncValidators.
Now let’s take a look at the router modifications. The earlier Angular versions had an empty string to set the routerLink directive value to zero and undefined; without any means for disabling the link’s navigation. However, with Angular 13, you can entirely disable the navigation, if you set the same values to routerLink directive. Another add-on is Active Change, a new output for the RouterLink directive; which is produced every time when a related link becomes either active or inactive. Developers using V13 can use dynamic ESM import statements as in this updated version; the load property that is a part of the route definition is unable to accept string values.
Enhancements to Angular Material Components
The enhancements made to Angular Material Components include:
Performance Improvements in Angular 13
Support for IE11 removed
The Angular team has removed support for IE11 (Internet Explorer11) in the latest version Angular13, based on customer feedback, to make it future-ready. As a result, the entire infrastructure concerning IE11 – build passes, CSS code paths, polyfills, special JS, etc. – will be eliminated.
Advantages
The build infrastructure and enhanced APIs will prove beneficial to Angular app developers, whereas the end-users will enjoy speedier load times as well as an improved UX.
However, this update will affect organizations that still use Internet Explorer 11 and have not yet migrated to modern browsers like Microsoft Edge. For migrating your project to Angular 13, you have to run the ng update – this will automatically drop the IE-specific polyfills and minimize the bundle size during migration. The existing Angular development projects that still need the support for IE11, can continue using Angular 12, which will be supported till November 2022.
Other Noteworthy Add-ons and Enhancements in Angular 13

I hope my post has provided you with comprehensive insights on the most significant updates that influence Angular app development.
Looking for further clarification on Angular 13 updates or would like to hire technical assistance for leveraging these amazing features to build futuristic apps/software solutions?
Contact Biz4Solutions, a highly experienced and distinguished Angular app development company that excel in providing high-end services to clients across the globe.