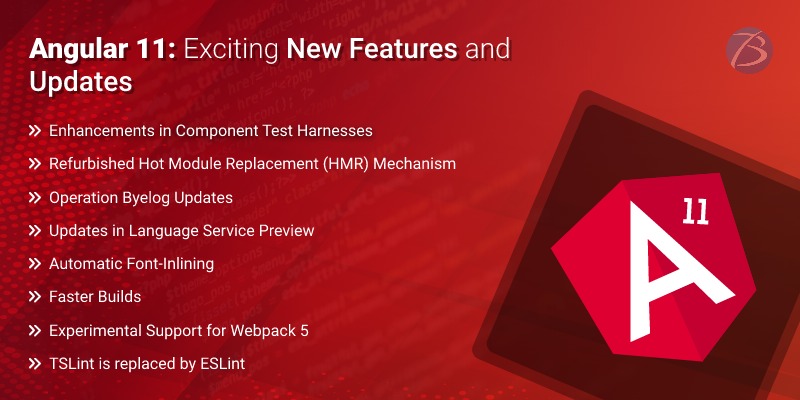 “The Angular framework is used by 25.1% of developers across the globe” – states a survey report published by the renowned portal Statista in 2020. As per this report, Angular is the third most favorite choice of developers worldwide. This framework is known for its technical goodies and frequent updates. Each updated version intends to harness the latest technological innovations and improving the Angular experience. The proactive Angular team recently released yet another updated version, Angular11. The Angular11 release date is November14, 2020, and this release has strengthened Angular app development further.
Angular11 aims at addressing the bug-issues that have been raised by the community which ultimately intend to improve the developers’ experience. Furthermore, Angular11 ushers in a plethora of improvements, modifications, and deprecations for simplifying the developmental process. As such, every Angular App Development Company should be well versed with the prominent updates in Angular11.
This article will enlighten you about the new updates introduced in Angular11. So, get ready to embark on a journey into the world of Angular11.

The Notable Updates, Add-ons, Deprecations, and Modifications introduced in Angular11

Enhancements in Component Test Harnesses
Component test harnesses were initially introduced in the 9th update of Angular. It offered a sturdy and legible API surface that facilitated testing of Angular material. It enabled developers to interact with the components of Angular Material by making use of supported API during testing. However, this feature was only available for Angular Material so far. Angular11 has added harnesses for all the components. As a result, testing became much easier, and the developers now create sturdier test suites. Besides, Angular11 also introduces parallel functions, new APIs, and performance enhancements. The parallel function feature works with asynchronous actions during testing, as it allows developers to carry out several asynchronous interactions with components simultaneously. The manual change detection feature allows developers to disable the auto change detection mode while unit testing and gain a finer-grained access control of change detection.
Refurbished Hot Module Replacement (HMR) Mechanism
The existing mechanism of HMR (Hot Module Replacement), which enables Angular developers to replace modules without having to refresh the full browser, is refurbished in Angular11. Now, a CLI command is introduced so that the developers have to put so much lesser effort to configure HMR. To enable HMR, one simply needs to employ the ng serve command along with an hmr tag.
Operation Byelog Updates
Operation Byelog was one of the items when the Angular’s Roadmap was shared by the Angular team. The team’s objective was to put in lots of engineering efforts for triaging PRs and issues till they could clearly understand the needs of the huge community. Their initial intention of this goal was fulfilled with the release of Angular11. The reason is all issues have been triaged successfully in each one of the three existing monorepos. This will go on as a continual effort as new issues are reported. Moreover, all new issues that are reported will be triaged within a period of two weeks. This has minimized the size of the Angular backlog considerably. Additionally, this update has resolved some common concerns related to the router and forms.
Updates in Language Service Preview
The language service feature in Angular offers tools that ease out development and boost productivity as well. The erstwhile Language Service was based on View Engine. With Angular11, the Language Service is based on Ivy which is more robust and accurate as compared to the View Engine. After this update, the Language Service can accurately infer the generic sin templates as done by a TypeScript compiler.
Automatic Font-Inlining
Angular11 also introduces auto-inlining of fonts. This feature converts the icons and Google fonts to inline in the index HTML, each time the flag is set in angular.json under the build option. The fonts that are being linked and used with the app will be downloaded and inlined by the Angular CLI during compilation. For leveraging this update, you need to ensure the availability of connectivity while the build is running on CI. So, upgrade your apps to Angular11 for receiving this feature by default.
Faster Builds
Experimental Support for Webpack 5
Webpack is employed for compiling numerous files into one single file or bundle. Webpack5 is the most recent version, though not fully stable yet. But Angular11 offers experimental support for Webpack5 so that they can be used together for trying out new things. As per Angular11 release notes the Angular team intends to expand this experimental support once Webpack5 is stable, for achieving smaller bundles and speedier builds.
Migrating to ESLint
With Angular11, the use of the popular Angular linting tool TSLint and Codelyzer has been deprecated and TSLint is replaced by ESLint. The future versions won’t be providing default implementation to lint Angular projects and hence the Angular team advises migrating to ESLint. The team has devised a three-step migration process for moving to ESLint from TSLint. The steps are:
Other noteworthy Updates

Angular11 is loaded with groundbreaking enhancements and profitable add-ons. To reap its benefits all you need to do is update to this most recent version.
Would like to leverage the goodies of Angular? Well then, reach out to the highly experienced and adept Angular app developers of Biz4Solutions, a distinguished mobile app development company that provides top-notch services to clients around the globe.