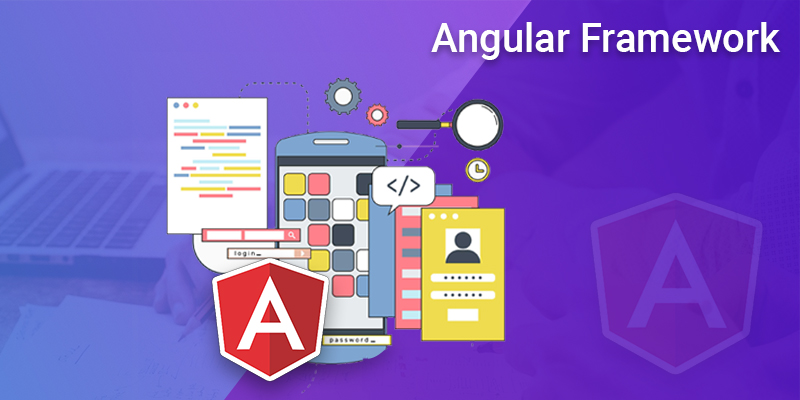 It was in the year 2009 when Misko Hevery, an employee at Brat Tech LLC, started working on AngularJS and finally in 2012, released its first version- AngularJS 1.0 and later released multiple versions of Angular one after the other, Angular 9 being the latest. The project is officially supported by Google. Today, Angular has developed into one of the most popular frameworks in the software world. Several leading companies like PayPal, Freelancer, Netflix, The Guardian, and iStock have used it for their projects. Consequently, there is a high demand for an Angular app development company that develops world-class applications for its clients.
Let us also have a look at some statistics related to the Angular framework estimated by SimilarTech, a renowned platform for insights on sales related to technologies.
We can see how this Google-empowered front-end framework has, in a short time, become the winning choice for app development as compared to other frameworks. So, in this blog, we will outline the reasons why this framework is a good choice over other frameworks. Let’s get started.

Why Angular Framework is Highly preferred over other Frameworks? 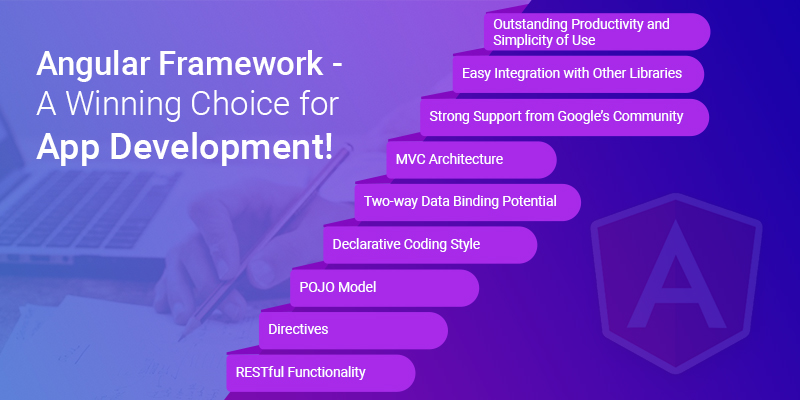 Outstanding Productivity and Simplicity of Use
Angular is quite simple to use due to the availability of high-end features. Angular has a component-based model that facilitates the reusability of components inside the app. These features significantly reduce the efforts of an AngularJS app developer for coding the applications. Also, AngularJS has customized IDEs that help the developers to track any errors instantly. This framework has numerous templates for the faster development of the UI. Another feature- CLI i.e. Common Line Interface in this framework lets the developers attach the components and create applications faster.
Easy Integration with Other Libraries
This is one of the best benefits that this framework offers. Angular integrates easily with other libraries, especially when it comes to web development projects, thus making the development speedy. When Angular app developers use various object-oriented MVC frameworks for server-side development, the integration of AngularJS for client-side development becomes simpler.
Strong Support from Google’s Community
It is supported and maintained by the Tech giant- Google. It is one of the most active communities of talented developers who are capable of resolving any issues during the app development process. So, the community provides excellent support to anyone and everyone having any technical issues. This is indeed a boon for every front-end web developer working with Angular. Also, this community hosts conferences and invites global IT companies that introduce modifications and advancements in the framework.

Now let us have a glance at some technical goodies that Angular offers:

MVC Architecture:
Angular comes with an MVC i.e. Model View Controller architecture. Using the MVC, the AngularJS developers can create an application in three separate layers and then merge the codes together. Also, this architecture allows synchronizing the data automatically and reduces complexity while coding. Thus, it becomes a time and effort-saving process altogether.
Two-way Data Binding Potential:
This is an amazing feature that allows the modifications in the user interface to immediately reflect in the applications. Any module changes, user actions, browser events, etc. in the framework gets updated effectively across the app. The developers don’t need to save the links to DOM elements as they can be used immediately. Also, low-level constructions don’t need to be used.
Declarative Coding Style:
Angular’s Declarative coding paradigm is used for the creation of commonly accessible platforms. This includes only the code essential for producing necessary outcomes which makes reading and understanding the code easier and also makes the code lightweight.
POJO Model:
The Angular framework makes use of all objects that are POJO i.e. Plain Old JavaScript Object. This model provides all the standard JavaScript functionalities for manipulating objects. It offers spontaneous and well-planned objects, so, the developers don’t need any extra getter and setter functions.
Directives:
Angular uses HTML which is a pattern language and has the facility of directives. As a result, the AngularJS app developers can easily build new HTML custom directives and code more effectively. It also improves code readability.
Single Page Application (SPA) Features:
This framework is packed with a host of SPA features which gives more control to developers over form validation abilities. SPAs allow easy creation and control of online forms. This results in productive outcomes and gives developers the freedom to modify the behaviour of HTML elements in the UI.
The Facility of Using Filters:
AngularJS comes with a directory of filters consisting of filters like Currency, Number, Date, Uppercase, Order By, etc. Also, in case more filters are required, developers can quickly register a new filter factory. The filters are quite helpful while developing database search functionality or while presenting large data chunks to the users.
RESTful Functionality:
AngularJS supports REST functionality in the ngResource module which again contributes to the building of a quality application while saving the developer’s time.
Other Technical Benefits:
Along with the aforesaid benefits, Angular app development also provides a few other advantages. It allows the creation of a captivating, user-friendly, and lightweight user interface. Moreover, it enables the creation of several new modules for a single application to ease out the development process. Furthermore, it comes with an in-built unit testing module which reduces the unnecessary wastage of time. This enables the developers to get real-time information about the projects.

We have seen the significant reasons why Angular app development can be chosen for your next project. Although Angular may not be the best-suited option for every kind of requirement in the market, it is undoubtedly one of the best technologies for creating a wide range of feature-rich and high-quality applications for several industrial verticals.
With this, we have come to the end of this blog and would like to know your vital thoughts in the comment section.