What are SVGs and how should you integrate SVGs while developing a React Native app using Expo. 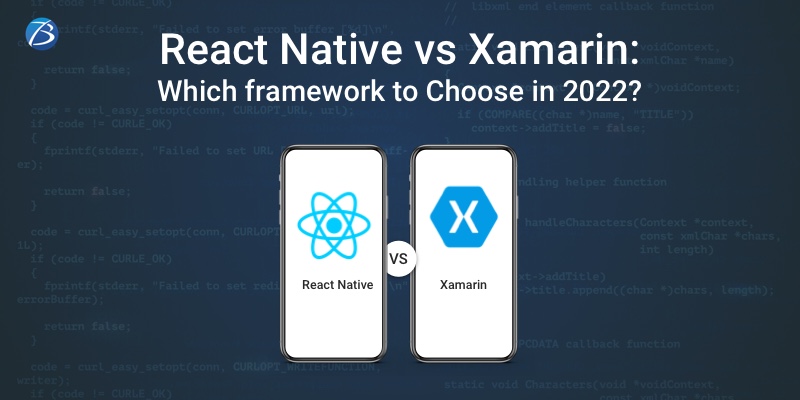 Modern-era applications are required to run seamlessly on Android and iOS – the two major operating systems. Needless to say, most entrepreneurs prefer cross-platform app development to stay competitive; and at the same time aim at offering outstanding UX at reduced development costs. Two of the most popular frameworks leveraged for crafting cross-platform apps are React Native and Xamarin. Now, the million-dollar question is; ‘Which framework outshines the other?’
Well, this post compares the offerings of both these frameworks and guides you through picking the right one that best suits your app development requirements. Let’s explore!

React Native and Xamarin: An Overview

The React Native framework was coined by Facebook and launched in March 2015. This open-source app development technology has been leveraged by biggies like Uber, Tesla, Facebook, Walmart, Skype, Bloomberg, and Vogue to create success stories.
Xamarin, the brainchild of Novell, came into being in 2011 and was taken over by Microsoft in 2016. This framework has been adopted by high-end firms and brands such as Cognizant, Honeywell, Cinemark, 3M, Alaska Airlines, Pinterest, YouTube etc.

React Native vs Xamarin: Analyzing the Differences and Distinct Offerings Which Framework is best-suited for your Project: React Native or Xamarin?

Both the frameworks React Native and Xamarin, come with distinct offerings and are suitable for specific app development needs. The choice of framework depends on factors like project requirement, business needs, resource availability, app development budget, etc.
For any assistance regarding app creation using either React Native or Xamarin; contact Biz4Solutions. We are a highly experienced mobile/web app development firm that excels in providing React Native app development services to clients around the globe. 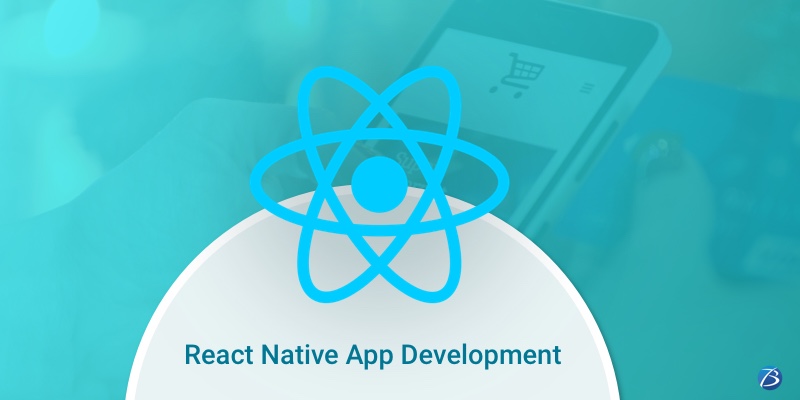 React Native, based on the Facebook-developed JavaScript library called React, facilitates the creation of purely native apps for Android and iOS platforms. It happens to be one of the most preferred and trusted frameworks for architecting app solutions for diverse industrial and commercial requirements. Renowned app owners like Facebook, Instagram, Bloomberg, Walmart, Townske, etc. owe their success to the React Native framework.
However, entrepreneurs need to gain insights into the unique selling points of this framework and consider certain aspects, before investing in React Native development. This post provides all the aforementioned information and a quick read will help aspiring app creators to make meaningful decisions. 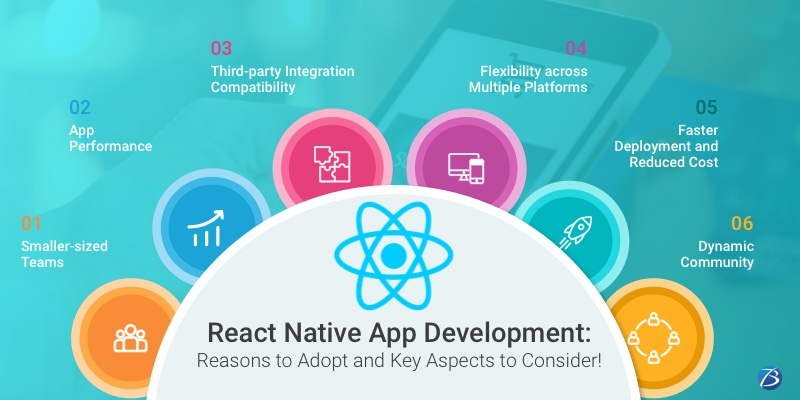 Lesser Resources/Smaller-sized Teams
React Native projects do not need a lot of resources or large teams. Entrepreneurs are able to build a React Native app with a small team comprising of a project manager, a technical lead, a business analyst, 1/2 UI/UX designers, one developer, and one QA specialist. This is indeed a huge business benefit.
App Performance
React Native development involves executing the entire project in short developmental cycles. React Native apps come with a quick loading speed due to the absence of heavy components that can adversely affect the speed. Furthermore, React Native’s hot reloading functionality accelerates the bundling process enabling developers to detect changes in the real-time application, even if that change is trivial. For these reasons, it speeds up app development to a great extent.
Third-party Integration Compatibility
Thanks to React Native’s high third-party integration capability, developers do not have to entirely depend on the web view for particular functions. For instance, for integrating Google Maps into your app, the React Native environment enables linking the plugin with a particular module. The map feature can be connected with certain functionalities of the mobile device such as rotate, zoom, etc. and the periphery can be maintained so that the app uses less device memory and loads quicker as well as effectively.
Flexibility across Multiple Platforms
React APIs are mostly cross-platform-oriented. Moreover, the file extensions offered by React Native support modules as well as platforms. And, these platforms are able to effortlessly determine the OS on which an app is running and also save this information for usage in more platform-oriented implementations. Since the file extension is platform-specific, developers can easily define specific files meant for executing particular functions.
Faster Deployment and Reduced Cost
React Native’s open-sourced nature makes several components readily available to app development teams. Furthermore, the same code is applicable for deploying the application on the iOS and Android platforms. Additionally, the usage of Redux, an innovative management tool, shortens the development time further. This results in a shorter app development cycle and reduced app development expenses without having to compromise on the originality, quality, and productivity of the application.
Dynamic Community
There exists a vibrant and dynamic community to help out React Native developers with doubts and queries. The offerings are manifold including handy information on React Native development, beneficial resources, and extended assistance.

Picking the Correct Navigation Library
Picking the right navigation library is important. The React Native ecosystem offers two kinds of navigation libraries – JavaScript Navigators and Native navigators. JavaScript Navigators can be set up easily while Native navigators deliver exceptional performance. You need to select the one that works best for your mobile app development project. In this regard, a quick discussion with experienced React Native app development Services will help you to choose the best-suited library.
Scalability: Scope
Today, it’s crucial to consider the scalability of the proposed application so that it perfectly fits into the differently-sized screens of smartphone devices. Besides, a modern-day app should have the required scalability for handling more real-time users as well as devices to accelerate profitability.
To scale react native applications to a larger codebase, adopt good tools like prettier and ESLint can help reduce syntax errors, include good libraries like React Router, react-hook-form, use GitHub for sharing and managing the components as building blocks that are independent and you can use Next.js instead of Create React App for starting the project.
React Native mobile app development offers plenty of room for scalability. – Facebook, a React Native empowered app is a good example. Nevertheless, for getting it right, it is important to understand the structure of the React Native app thoroughly. And, this can be achieved through extensive developmental efforts by skilled and experienced React Native developers.

Which Types of Apps are best suited for the React Native Framework?

Fully Functional Prototypes/MVPs
The strategy of hitting the market with a quick app prototype (MVP) at budget-friendly development costs, instead of investing in a full-fledged app at the beginning, is incorporated by most start-ups for getting their app idea validated and identifying the requirement of the target audience. This plan of action is one of the key prerequisites of agile development:
React Native development is the ideal solution for this strategy as this framework involves low project expenses and speedy development cycles as compared to native tech stacks. And, unlike hybrid apps, React Native applications will deliver test users a truly native UX. In fact, most of the popular React Native apps have begun their journey as quick prototypes and were thereafter updated with necessary functionalities.
Example:
Airbnb possessed a website built using React. Thereafter, the rising popularity of mobile apps put them under pressure to craft a mobile app solution for staying competitive. So, in 2016 they developed an MVP using React Native and added new features in the form of updates. Once, they were well versed with the requirements of target users and the shape of the full-fledged mature product; they architected two native applications – one each for iOS and Android.
Basic Cross-platform applications
Native app development is advisable for developing highly complex software solutions that require several platform-specific features like audio/video processing, multi-threading, etc. But, if you intend to create a basic cross-platform app in a cost-effective way and your target market is evenly distributed across Android and iOS platforms; opting for React Native app development will be the ideal strategy. The reason is React Native apps involve low developmental costs and app owners can effortlessly make the interface function for both Android and iOS platforms using one single codebase.
Example:
The business brand Townske has leveraged React Native to build an application that shares city guides. The firm had only one developer, and so it was impossible to even think of developing separate apps for the iOS and Android platforms. React Native development enabled them to create a cross-platform app speedily, with their existing resources – the brand reused most part of the business logic of its existing React-based web app for building their mobile application. React Native’s key offerings – high code reusability, development speed, easy debugging, and helpful community – helped this brand to sail through all project-related challenges.