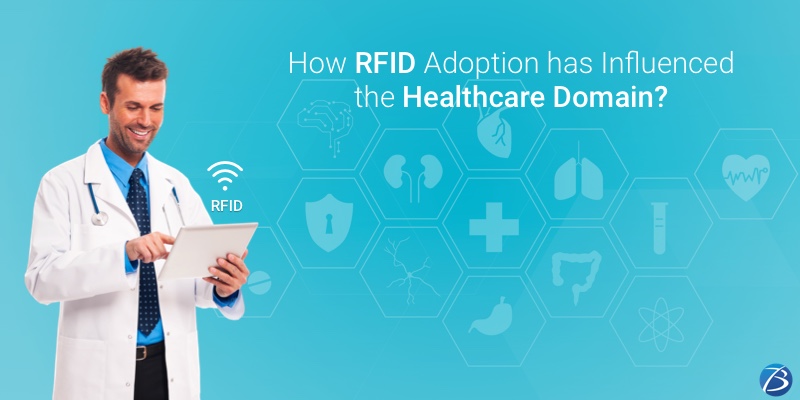 Radio Frequency Identification (RFID) technology and its rising implementation in the healthcare domain has proved this technology to be a favorable asset to medical facilities and hospital bodies. The RFID technology offers promising benefits like real-time traceability, communication, identification, etc., thus, helping organizations to save vital time and money. Besides, the healthcare app development services leverage this technology to build advanced solutions that ensure patient and asset tracking, patient safety, enhanced quality of care, and more.
There is a lot to talk about how RFID is transforming the healthcare industry and in this post, we will provide insight on how healthcare app developers and healthcare companies can benefit from it.

Use Cases of RFID Technology in Healthcare 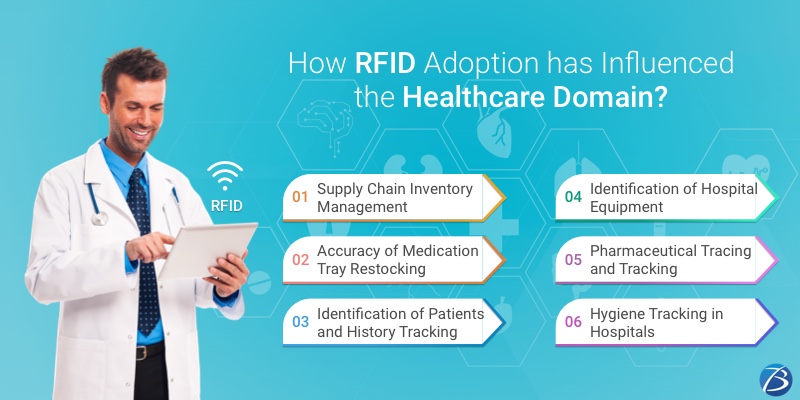 Supply Chain Inventory Management
RFID systems enable better inventory visibility, utilization, and accuracy in healthcare facilities. They reduce product expiration, wastage, and shrinkage to some extent. They help in reducing equipment and supply chain costs. Also, in some cases, certain RFID solutions like automatic inventory tracking systems decreased the time spent on searching and shipment of products to just 5 minutes, which used to be three hours if done manually.
Accuracy of Medication Tray Restocking
Using the RFID solutions, the time for daily medication tray restocking could be reduced by 15 minutes/tray.
Identification of Patients and History Tracking
RFID technology helps in patient identification when an RFID band is tied over the patient’s wrist. The band carries all the health data of the patients like their name, medical history, reports, allergy details, etc. This crucial data is useful to doctors while treating the patient.
Besides, RFID prevents wrong-site surgery, allows patient care auditing, provides automatic billing, and also decreases long wait times.
Identification of Hospital Equipment
In the operation theatres, there are several life-saving equipments used, and inspecting them is mandatory for avoiding any sudden breakdowns. In this case, too, RFID asset management systems prove beneficial as they monitor the equipment and inform the concerned personnel of its expiry.
RFID helps in completing the UDI requirements. Also, it helps to enhance CAUTI outcomes through automated asset tracking and avoid any additional purchase of equipment.
Pharmaceutical Tracing and Tracking
RFID solutions facilitate effective recall management. The RFID asset tracking and management systems can manage the drugs, other pharmaceuticals, and products like gloves, masks, syringes, etc. in hospitals by tracking the available stock and making the concerned person aware if there is any shortage. This also reduces the expiry and wastage of the products.
Hygiene Tracking in Hospitals
RFID solutions can be utilized for improving hygiene tracking practices in hospitals. These prevent hospital-acquired infections. This is so because continuous monitoring is quite an unrealistic approach when it comes to hand hygiene compliance. RFID-based continuous and real-time automatic hand hygiene recorders enable the medical facilities to record compliance that could lack when a direct observer is involved.

Some More Applications of RFID Innovation in Healthcare

A Few Drawbacks of RFID Tags and Systems in Healthcare

RFID technology comes with a huge potential to assist medical organizations, hospitals, clinics, pharmaceutical producers, biotechnology companies, etc. Besides this, the RFID innovation has opened new doors for enhanced operational efficiency, better security, and improved cost savings by tagging stocks, patient data, personnel records, and other assets.
However, despite providing so many advantages, the adoption of RFID technology has not yet taken up speed in the majority of healthcare facilities. As of now, these systems are being used in countries like the USA, Japan, UK, France, Spain, Italy, etc. But, this revolutionary technology needs to be implemented furthermore.
That’s it for now.
Hope it was insightful.
Please comment below to share your thoughts on the aforesaid topic.

The journey from app ideation to prototyping – checking the relevance of the app idea before jump-starting the app development process – is one of the most crucial milestones for crafting an impeccable application. The reasons are:
However, to successfully prototype an app, you must be aware of the right steps. So, I have penned down the key steps involved in prototyping an application. 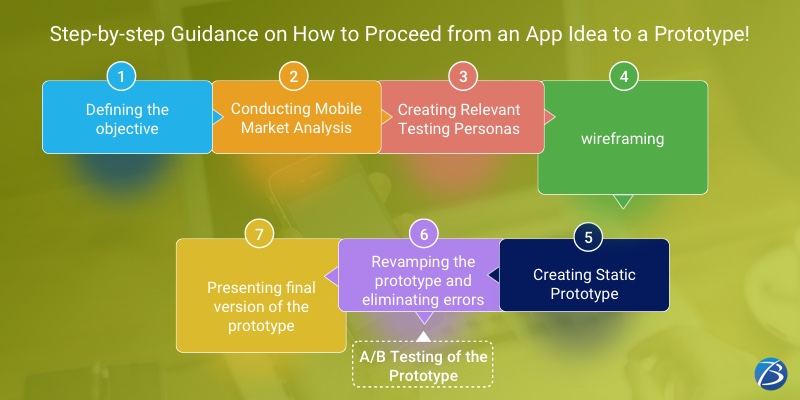 Prior to prototyping, check whether your app idea is financially promising and technically feasible.
1. Defining the Objective
The crucial questions concerning app ideation that should be answered during this stage are:
What’s the app’s objective?
Does the app fulfill any specific consumer/business requirements?
So, the very first step is capturing the app idea and visually representing it on a piece of paper. Paper prototyping should be kept simple without using any colors, or art and should include only a rough list of the doodles or features of the UI of the envisioned app. This is a rough visualization of the app idea that will be recreated as well as refined into digital format during the later stages.
2. Mobile Market Analysis
For validating the effectiveness of your concept, one should conduct a mobile market analysis for understanding the following particulars:
This stage determines whether the idea is effective, is capable of competing with similar apps existing in the market and whether the app launch timings are suitable for its success.
3. Creating Relevant testing Personas
The next step is to create relevant types of personas for subsequent testing processes. These personas represent the preferences, predicted behavior, values, etc. of the would-be app users.

1. Wireframing
A wireframe is a simplified, low fidelity outline of the proposed end-product comprising of words, lines, boxes, and even descriptions. It is simply the structure of the app designed by first formulating the requirements. User flows (the sequence of actions needed by the end-user for reaching their destination) are created for every major feature of the app. Wireframes are created either on paper or using the graphics editor software. Check out the key steps.
2. Static Prototype: Creation and Testing
Now, develop a static prototype based on the outcome of wireframing. This stage can be executed alongside wireframing as well. Its prime intention is to establish and display the transitions amongst app pages.
The next step is conducting the A/B testing of this prototype. It involves creating interactive prototypes and sharing them with software industry veterans, volunteering individuals, and various personas that represent the app’s target audience. User testing helps in receiving feedback on the app’s crucial usability aspects such as:
Prototyping helps the investors get a real view and feel of the product. It allows the testers to get an idea about the app’s usability, and the developers to be well-versed with the intended UX prior to finalizing the design.
3. Revamping the Prototype
This stage involves resolving the flaws detected and revamping the app based on the testers’ feedback. This ensures that the app’s functioning is intuitive and convenient, and the app becomes more attractive to potential end-users in the future. Once this stage is completed, the prototype comes back to the testing stage and this cycle goes on till satisfactory outcomes are achieved.
4. Finalizing the Design
Once all parties approve of the prototype, the app’s UI design is finalized. This includes finalizing the app idea, the shape of buttons, etc., and achieving a consensus on the use of colors. After the design creation process is completed, testing is conducted for checking the validity of the selected UI solutions and the appearance of the visual elements.
5. Product Demo
Now, it’s time to combine screens into a prototype; either a clickable one or one with arrows; for demonstrating it to the clients or potential investors. Remember to be transparent with them about whether the prototype is the actual functioning product or not. The key points to highlight in the demo meeting are:
After the demo, the customers would wish to make certain changes. These requested changes should be executed at the earliest and arrange for another demo. Once, the clients are satisfied, the finalized user flows are handed over to the developers for preparing the cost estimate.

Prototyping is undoubtedly a crucial aspect of the project planning stage and app creators shouldn’t ignore its importance.
Having trouble transforming your app idea into a fully functional app? Contact Biz4Solutions, a highly experienced offshore app development company. It is a leading firm offering mobile app development services that will be your technology partner all through your app development project.
Page 4 of 22First«...23456...»Last