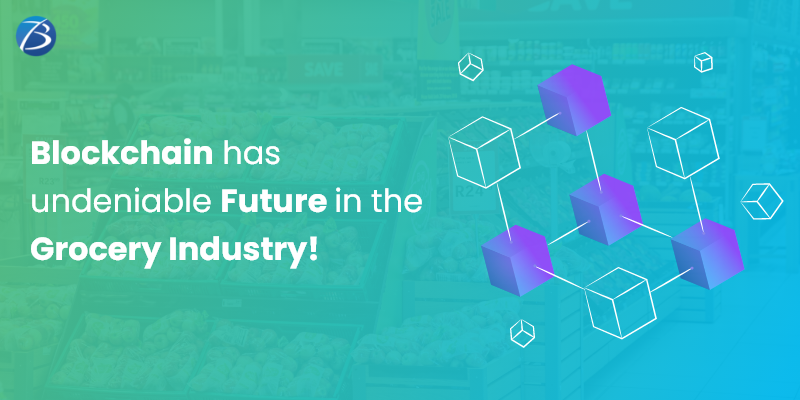 You might be wondering how blockchain in grocery is used. In a world that is becoming more and more automated, the use of blockchain is very rewarding for some industries. It is now very clear that there are some industries in which the use of blockchain technology can be applied seamlessly to improve how things work. One such industry is the grocery industry, which has seen a lot of changes recently.
You may be pondering, what is all the hype about when it comes to blockchain technology, especially if you shop at a grocery store that’s still using paper receipts. Blockchain in grocery is revolutionary. Ever since the advent of blockchain, grocery is one of those industries that have shown a lot of interest in this new technology. In the past, food retailers were struggling with different sets of challenges. The industry has been hindered by a lack of transparency, inefficient supply chains and difficulties in access to financial services. This is where Blockchain comes in.

Grocery chains that has adopted Blockchain has been able to resolve these issues, resulting in increased transparency and improved customer satisfaction. In today’s blog post we will be looking at how blockchain in grocery has been used by several retailers on a global scale, as well as talk about some of the companies experimenting with the technology in their stores.

Everyone is talking about the term blockchain these days. The use of blockchain in grocery is an epic way to turn the traditional industry into a modern one. The term “blockchain” is often associated with cryptocurrency, but the technology actually has a much wider range of potential applications. In fact, blockchain could revolutionize the grocery industry by providing a more secure and efficient way to track food items from farm to table.
Blockchain is a decentralised platform. It is a variation of distributive ledger technology. It brings transparency and certainty to the table irrespective of the niche or industry it is been used in.

How does blockchain work?

At its most basic level, a blockchain is a digital ledger that can be used to record transactions. All such transactions carry a cryptographic signature. Hence it is digitally noted and no transactions are missed. These cryptographic signatures are called the hash. These transactions are then grouped into blocks. Each “block” in the chain has a timestamp and it carries a link to the previous block. This makes it difficult for anyone to tamper with the data in a blockchain, as any attempt to do so would be quickly detected.

Why is blockchain well-suited for tracking food?

One of the main benefits of using blockchain in grocery is for tracking food as it would allow all players in the food supply chain–farmers, distributors, retailers, etc.–to have visibility into every step of the process. This would not only help to reduce food waste, but also make it easier to trace contaminated products back to their source and take action to prevent future outbreaks. In addition, because blockchain is an immutable record, it could provide a more reliable way to track expiration dates and ensure that food items are safe to consume.

Why would the grocery industry use blockchain?

Why is it advised to use blockchain in the grocery industry?

Blockchain has the potential to revolutionize the grocery industry. Blockchain can provide a single source of truth for all stakeholders in the supply chain. This would allow for more transparency and traceability of food products. Blockchain can also help reduce food waste by improving the visibility of food expiration dates.
The future of blockchain in the grocery industry is bright. Blockchain has the potential to streamline the supply chain, reduce food waste, and provide a better experience for customers. Check how blockchain is impacting various vendors in the grocery chain:

How is blockchain used in a grocery store?

Grocery stores are using blockchain to track food items throughout the supply chain. By tracking food items with blockchain, grocery stores can ensure that the food is fresh and safe to eat. Blockchain can also be used to track other products in the store, such as clothing or electronics. This allows store employees to quickly locate items that have been sold out and restock them.
Blockchain-powered grocery app development is a very effective solution. It will create a great user experience. All the items in the stores will be ordered from your devices. So it reduces time or travel spending and creates a virtual store at users’ fingertips.

How would blockchain affect the grocery industry?

There is no doubt that blockchain technology has the potential to revolutionize the grocery industry. By providing a secure and transparent way to track food items throughout the supply chain, blockchain could help to ensure food safety and authenticity, while also reducing costs. In addition, blockchain could also be used to create a digital marketplace for food producers and distributors, which would provide greater choice and flexibility for consumers.
Decentralized elements of blockchain are very rewarding to the grocery industry. It allows auditing of goods in a very effective manner. It is so advanced that grocers can track the shipment of specific items without scratching their heads or without any stress. This allows customers and producers to have good communication, create positive feedback and also helps to develop a positive relationship among themselves.
Many big companies in the world are partnering with Blockchain app development companies to leverage Blockchain-related services. So in the near future Blockchain will revolutionize the supply chain, market delivery and shipments. Blockchain is a very sustainable solution.
However, it remains to be seen how quickly and extensively blockchain will be adopted by the grocery industry. While there are many potential benefits, there are also some challenges that need to be addressed before blockchain can truly become mainstream. For example, blockchain technology is still in its early stages of development and it will take time for businesses to build the necessary infrastructure. In addition, there is a lack of standardization around blockchain technology, which makes it difficult for different companies to interoperate.
Nevertheless, the potential of blockchain in the grocery industry is undeniable. With further development and adoption, we could see a radical transformation in how food is produced, distributed, and consumed.

What are some of the problems with using blockchain within a grocery store?

There are a few potential problems with using blockchain within a grocery store. First, the technology is still fairly new and unproven. There could be issues with the scalability of blockchain, as grocery stores typically have large amounts of data to process. Additionally, blockchain could potentially disrupt the current business model of grocery stores, as it would allow for direct relationships between manufacturers and consumers.
Well, it seems like blockchain could change everything for people in the grocery industry – for better and for worse! Cryptocurrencies are at the heart of Blockchain technology, so it’s no surprise that this innovation is influencing an increasing range of industries.

We at Biz4Solutions, know how to push buttons and get your business going. As a mobile app development company can help you create AI or blockchain-powered amazing applications for mobile devices. From Big Data and IoT to healthcare, we have created good success stories with our services to start-ups. Our pioneering mobile app developers can bring not just the conventional solution but also offer smart ways to upgrade your business and increase the productivity of your business. It’s your time to say YES! Help us help you with Digital transformation, robotic process automation, IoT, cloud solution, mobile apps and many more state-of-the-art services. Drop your email in the comment box and relax, our experts will get in touch with you shortly.