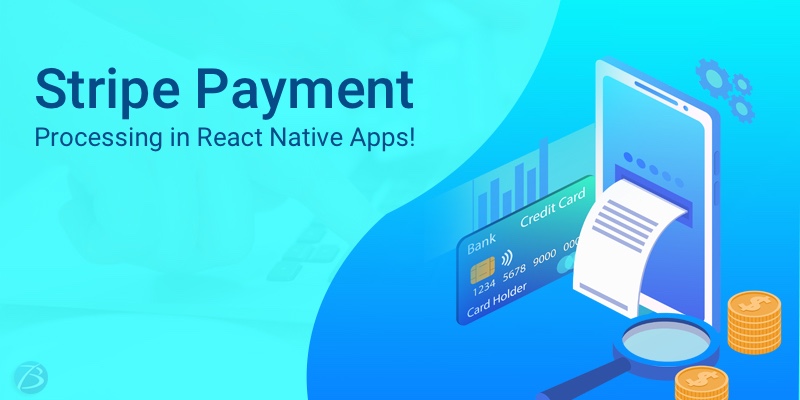 One of the vital segments of React Native development is the payment integration process and this blog is all about that.
React Native Development Agency
Well, making online payments through the web or mobile apps is a common practice today. As a result, millions of apps have the payment processing feature embedded in them. Various payment gateways like PayPal, Braintree, Stripe, Expo, RazorPay, AWS Amplify, etc. are used for this purpose. Out of these, Stripe is one of the most widely used and fastest-growing gateways.Stripe Payment Services is also being extensively used in a diverse range of React Native apps and is a preferred choice of several React Native Service providing Firms worldwide
So let us have a glimpse at what Stripe is, its working mechanism, and the step-by-step methodology to integrate it into the React Native applications.

As discussed earlier, Stripe is a popular payment gateway or a payment processing platform founded in 2010. It is used by individuals or businesses- small or large, for accepting payments via credit and debit cards, recurring payments used for subscriptions, sending payouts, and also process automated clearing house (ACH) transactions. It also serves as a third-party payment processor and supports various payment methods such as Google Pay, Apple Pay, Masterpass by Mastercard, Wechat Pay, Microsoft Pay, etc.
Stripe is quite easy to integrate due to the availability of easy-to-use APIs. Also, it provides the facility of banking, prevention from frauds, technical infrastructure, etc. that is needed for operating the on-line payment systems. A large number of eCommerce solutions are using Stripe. Currently Stripe powers the payment processing for some of the well-known brands including Lyft, Pinterest, Blue Apron, Under Armour, etc.

Let us understand how Stripe works in React Native apps with a pictorial representation.

Stripe can be implemented in the frontend of the React Native apps in two ways as mentioned below:
Both of these methods have their share of pros and cons. The Tipsi-stripe library can be easily implemented and works smoothly. But as of now, Stripe has not ‘publicly’ approved the React Native library from Tipsi. But Stripe’s SDK’s is considered a smarter choice when one is looking for maximum compliance in a production environment.

How to Implement Stripe?

Note: Here we have considered the Tipsi-stripe library for integration of Stripe. Also, version 0.60 of React Native was used. Also, we considered a Firebase server for the backend part.

Step 1: Creation of Stripe Developer account and getting the API keys

For creating the account, visit Stripe.com. Note that the services provided by Stripe are limited to certain countries. After account creation and registration, you will land in the Stripe Dashboard. Then go to Developer Tab > API keys for accessing the keys. Ensure that for viewing the ‘Test Data,’ you ON the toggle. All the development tasks must be carried out with ‘Test Data’.
‘Publishable key’ is used to connect the react native app with the Strive Native SDK or Tipsi-stripe library. This key is used for generating a token. ‘Secret key’ is used in the backend for the actual payment processing, where your server makes a connection with the Stripe server using this secret key. After testing the process, you may toggle to ‘Live keys.’

Step 2: Development of a React Native app for integrating Stripe

For developing a basic app, ensure that you are equipped with all the pre-requisites pertaining to the React Native framework’s official documentation. Now create a blank app and run it in a simulator or device. The default start screen will appear on the simulator or device. You may use the user interface of the Tipsi-stripe library because it supports all kinds of payment options viz. Google Pay, Apple Pay, etc.

Step 3: Integration of the Tipsi-stripe library for the generation of token

Install Tipsi-stripe package for integrating Stripe functionality into your react native app. Now, set up your Podfile for the integration of appropriate pods in iOS apps and then run pod install. Then set up the Xcode project, link the Tipsi-stripe package against your Xcode project, this will install all dependencies related to CocoaPods. Import the library in your app for the generation of the token. Now initialize it with the Stripe credentials which you will get from Stripe Dashboard. The Publishable key is used for generating token only. Now replace the Publishable key with your own key.
To generate the token, the ‘paymentRequestWithCardForm’ method can be used from the library. This method will open the card details Stripe form. User will receive a token from the Stripe after entering the card details in the above form.

Step 4: Creation of Firebase function or any other backend server

For completing the payment, we can create a Firebase cloud function (or any other backend server) and execute it using REST calls from your app. This function will interact with the Stripe server and successfully complete the payment. The sub-steps involved in this process are as follows:

Step 5: Connection of the app with the deployed live Firebase server and completion of the payment

The final step involves making an HTTP call to the Firebase function and completing the payment request using the generated token. In this way, payment processing happens in the React Native apps using the Stripe gateway.

In this blog, we learned that there are two important sections in the Stripe payments- frontend for the tokenization process and backend for the payment requesting and completion. The Tipsi-stripe package is used for the frontend part and any server can be used for the backend part. We have gone through the significant steps involved in this process which will be very helpful to developers using React Native technology as well as companies providing React Native services that aim at designing top-notch apps with a sleek payment processing feature.
We hope this blog was useful to you! Please share your thoughts in the comments section. Also, reach out to us, a React Native Development Company in Frisco, for any doubts or assistance.

React Native 0.61 is quite a small update comparatively. It is an attempt to resolve several persistent issues present in the older versions. The broken hot-reloading feature was one of the biggest pain points for React Native App Developers and the Community. This new update majorly focuses on a new reloading experience called Fast Refresh. With this update, the developer community can heave a sigh of relief.
But before looking into features in this new version, let’s have a quick look at the persistent issues in React Native. Like any other technology, this technology had several shortcomings and no matter how small, but these shortcomings did affect the overall mobile app development.

Hot-reloading Issue: Being one of the most popular features of React Native, the hot-reload feature got much attention from the developer community. But sadly, it didn’t go that well and especially failed to work appropriately with Stateless Functional Components (SFC). In the React Native 0.61 version, this issue has been fixed, and now, reloading any React Native code reliably is possible without reloading the complete application.
Time-consuming Updating Process: Updating React Native from an older version to a new one is tedious and needs a lot of time. This process especially becomes highly time-consuming in case the React Native Developers haven’t installed a few updates and then want to update it once for all.
Sudden App Crashes at Times: Several times, React Native apps can crash suddenly and there is not much information available to know the reason for such app crashes.
Finding Main Reason of Exception: Finding the main reason for the exception is quite challenging in the React Native framework. Stack trace in the Chrome debugger console makes the debugging process much time-consuming. In this case, component DidCatch also doesn’t seem much helpful.
Issues with Ram Bundle: The ram bundle of React Native isn’t supported by any OTA platform like CodePush. This issue is caused since React Native community is not connected widely.
So, to overcome such challenges and solve the existing bugs, React Native 0.61 was introduced. New features in this version will help the developer community to leverage an improved development process and also result in a better end-product.

Notable Features of React Native 0.61 and its Impact on the Developer Community 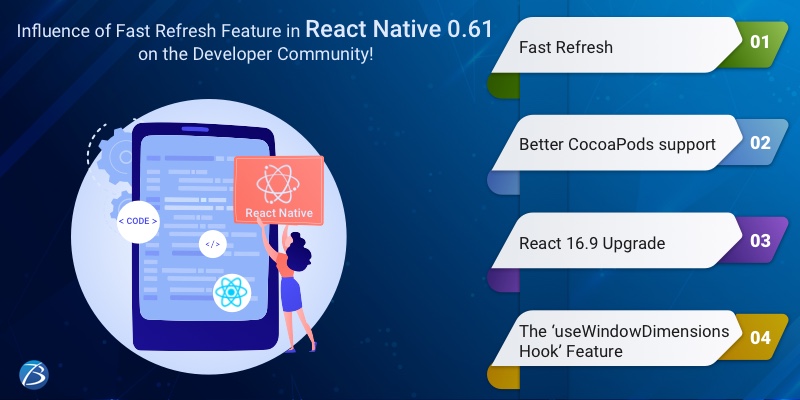 Better CocoaPods support: A few updates in the 0.60 version of React Native were by default made to integrate CocoaPods. But this leads to several issues in the use_frameworks! But thankfully, this issue is being worked upon and fixed in 0.61. After this update, it has become much simpler to integrate React Native into the iOS projects that are developed with dynamic frameworks.
React 16.9 Upgrade: In this version, there have been improvements to act. Also, the old names for the UNSAFE_ lifecycle methods have been deprecated.
The ‘useWindowDimensions Hook’ Feature: Hook is another fascinating feature introduced in this version that offers and subscribes to dimension updates. This feature can be used instead of the Dimensions API in several cases.
Fast Refresh: The “hot reloading” and “live reloading” features have been unified into a single feature called “Fast Refresh” for addressing the hot-reloading issue. This update is quite helpful to the developer community and every React Native App Development Company. So, let us have a quick look at what’s so impressive about this feature.

Significance of the Fast Refresh Feature

The hot-reload issue needed enhancements for a long time and in this update, it has been addressed. So, what are these enhancements, and how is these will impact the developers as well as React Native App Development services leveraging this framework? Please read along.

We have seen several features of React Native 0.61 version along with its Fast Refresh feature. About this feature, the developer community finds it much flexible to use. It works well for both functional components and class components. Though it is almost similar to the hot-reloading feature, this time, it is much more efficient and excellent in performance.
That is all in this post!
What is your experience with React Native 0.61? Do share in the comments section.
For any further assistance, please feel free to discuss with us!
Page 1 of 512345»