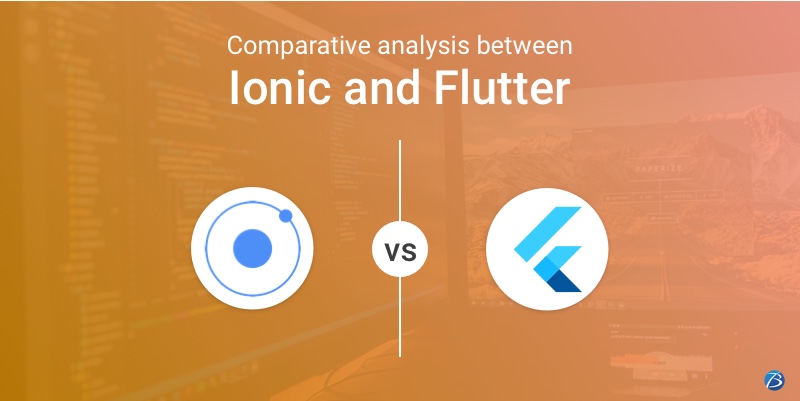 Flutter, Google’s brainchild, is a relatively newer framework as compared to Ionic and is still evolving. It was created in May 2017 and is currently managed by Google with the help of an ECMA standard. Flutter is a UI toolkit that employs Dart programming languages to build swift, attractive and natively compiled cross-platform apps. Flutter was introduced as a Software Development Kit (SDK) intended to build modern apps for Android and iOS. In the case of Android Studio, integration is done with inbuilt Java,and Swift and Objective C integration is done in the case of iOS. 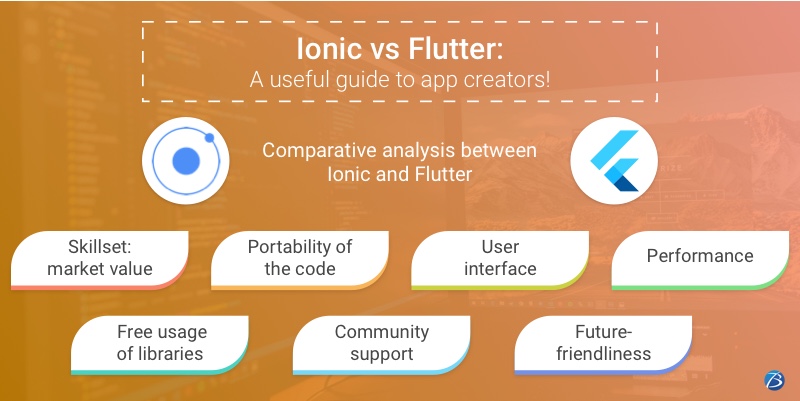 Now let’s explore the differences between Ionic and Flutter based on the following parameters.
Skillset: Market value
The skillset required to use Ionic involves learning JavaScript and other general web technologies that are needed for any web app development project regardless of the framework used. But, learning Dart for using Flutter will not prove useful for projects involving other frameworks. Moreover, owing to Flutter’s highly-custom environment, developers need to master certain unique methodologies that are time-consuming and applicable to Flutter app development only. Furthermore, the requirement for Dart developers in the coming years largely depends on whether the newbie Flutter, will succeed as a viable solution in the future.
Hence, acquiring an Ionic skillset proves to be a safer bet for a developer.
Portability of the code
Let’s have a look at how the codes of Flutter and Ionic behave in various eco-systems, OS and processors. Flutter development leads to the creation of visually appealing Android and iOS apps. It is a great choice for mobile apps but encounters limitations when deployed on the web. Ionic, on the other hand, creates fairly good mobile apps and exceptionally good web apps. Therefore, if you are planning to build PWAs or web apps, picking Ionic is advisable.
User Interface
Flutter has attractive user interface in comparison to Ionic because Ionic uses HTML and CSS for rendering. Flutter has widgets as part of UI elements whereas Ionic has Web Components.
Performance
Flutter fares well if your application requires exclusive animation whereas Ionic serves better if you intend to architect an app that is more consumer-facing. Ionic employs primitives and the runtimes of the standard browser, hence the bundle size is 2991 bytes whereas Flutter requires a heavy code for building even a basic application.
Flutter users Dart language and since it does require JavaScript Bridge for interactions between the app, the performance is far better. For rendering Ionic uses Web technologies, hence the performance is much lower.
Mobile performance is better in Flutter in comparison to Ionic. Web performance is poorer in Flutter than Ionic.
Free usage of libraries
The Flutter app developers can use Flutter’s libraries and system technologies free of cost. In Ionic, several libraries are free but a paid Pro Development Environment is needed for speeding up the developmental cycle.
Community support
As far as community support is concerned, Ionic surpasses Flutter. Flutter being a newbie lacks strong community support while Ionic enjoys the support from a dynamic global community that assists Ionic app developers to solve problems. However, owing to Google’s continual effort, Flutter also may develop a vibrant community in the years to come.
Future-friendliness
Now let’s discuss these frameworks from the perspective of the flexibility and freedom offered once the app matures. Flutter app development may turn out to be a bit risky. The reason is, if by any chance Google shuns Flutter, a Flutter app Development Company will be left with a code base and skillset that are homeless, though such a situation is least likely. Ionic app development on the other hand is based on open web standards and relies on web components. So, it can be used with any existing JS framework or compatible future framework if the app creators choose to create apps for other platforms or use the code for other projects.
I hope this blog has enlightened you about how the custom-based approach of Flutter differs from the web-based approach of Ionic. Both of these cross-platform app development frameworks are distinctive in their way. Therefore, whether to opt for an Ionic app development company or a Flutter app development company solely depends on your project requirement.
Please do let us know in the comments section below for any further queries. We would be glad to assist you! 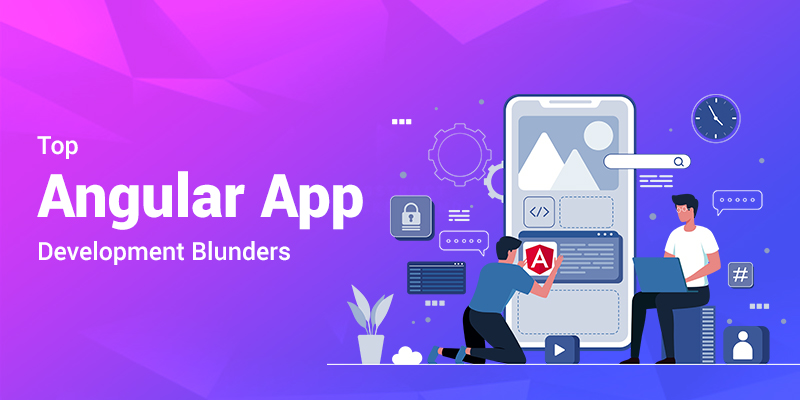 Angular is one of the most popular JavaScript framework, which offers myriad benefits to businesses worldwide. Numerous giants in the corporate world have used Angular app development for a wide range of projects. For instance,
Also, it is being predicted that Angular’s demand is going to rise further in the coming years. We can see that Angular’s future looks bright.
But despite the ever-increasing demand and popularity, there are some flaws in this framework like any other framework. The developers and the Angular development services must be aware of these in order to create top-grade applications.
In this blog, we have outlined the most common mistakes committed by the Angular developers during the mobile app development process. So let’s get started. 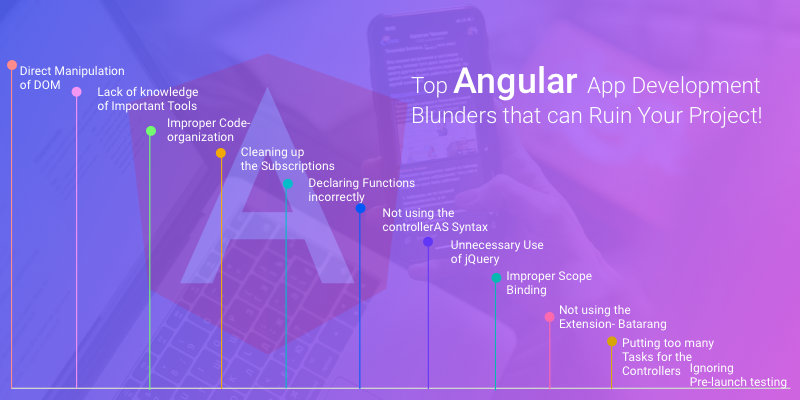 In an Angular development company, it is quite normal for the developers to make some mistakes while building apps. Sometimes it is due to over-looking, sometimes it is due to lack of experience and sometimes it is due to pressing timelines. Even experienced Angular developers tend to make unwanted mistakes at times. But the knowledge of these errors and mistakes in advance can curtail them to a great extent and lead to time-saving and better app performance as well.
Hope this blog proved useful to you.
We would like to know about your experiences too.
If you have come across any other mistakes in Angular app development, do share it with us in the comment section below.
Page 1 of 2812345...»Last